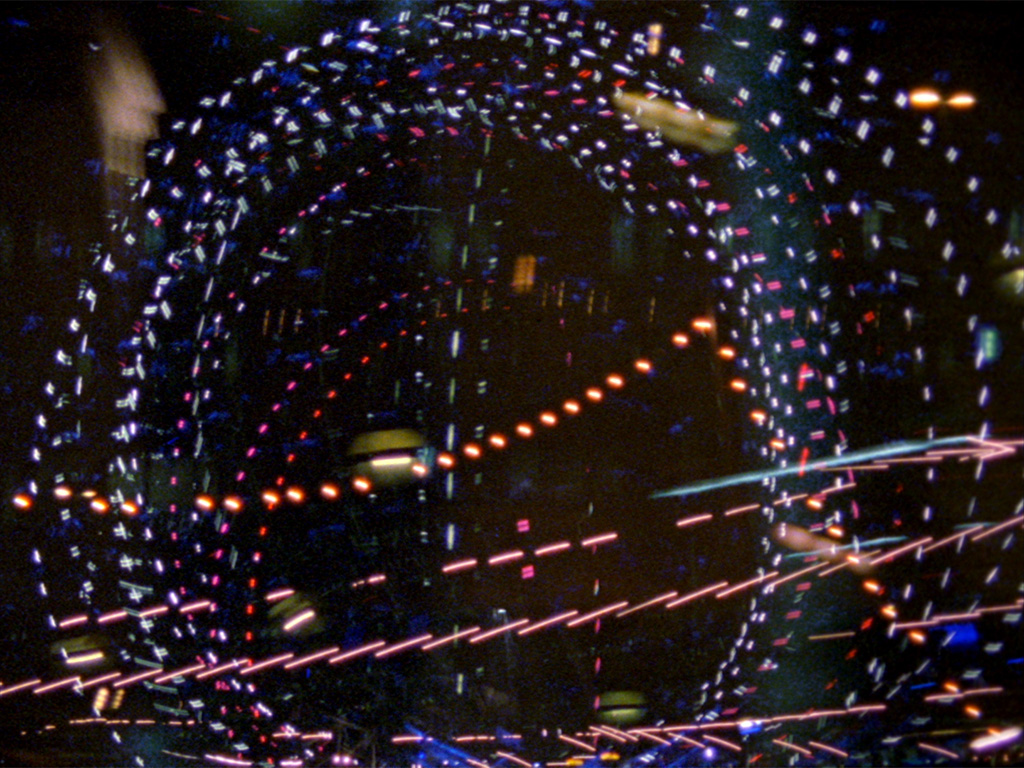 Welcome Back to Southside shows a journey home from work superimposed 36 times onto one reel of 16mm film, then expanded digitally with a traveling loop.

“In 2004 I filmed my journey from work in the centre of London to home in the suburbs south of the river. The route didn’t change but the view was never the same. I wanted to make a memento, condensing this journey onto a single roll of film, layering one view on top of another. Filming on one reel, unedited was partly an economic choice but I also wanted to develop my use of in-camera cutting and superimposition. After taking seven years to finish my previous short film I wanted to work within tighter time constraints, I was leaving that job in a few months, this gave a definite end to the project and no time to do tests.

I liked the idea of moving from away from my previous trial-and-error, accretive process; this film was more an act of faith. The film follows the bend of the river, pivoting around the London Eye ferris wheel as it changes in aspect from arc to oval to circle. This half-orbit propels the film along the river to Battersea and Wandsworth, navigating by the urban constellations, the frame clings to familiar sights: the up lit MI5 building, lurking like Bela Lugosi; and Albert Bridge, showing off. The multiplanar composite image and processual exigencies turn the Eye into a mandala and transforms the passing lights into a mess of flickering arabesques.

It is an unedited study of repetition, and a souvenir of my journey home. I filmed my journey home 36 times using the one 100ft roll of 16mm film, rewinding each day using an electric drill in a changing bag then re exposing the film on my next journey home. 36 was a six-fold increase in my previous use of superimposition and was also all I had time for.

The resulting 3 minute film was called Welcome to Southside and digitisation has allowed me to realise a longer version, extended by looping. In this expanded version, called Welcome Back to Southside, the circular motif and iterative structure combine into a travelling loop that expands the original film to 45 minutes to match the length of the original journey.”

CHRISTOPHER STEEL
Steel learnt film-making at the London Film Makers’ Coop. His work is shown in galleries and festivals internationally and is held in the collections of LUX, Lightcone and Caixa Forum.