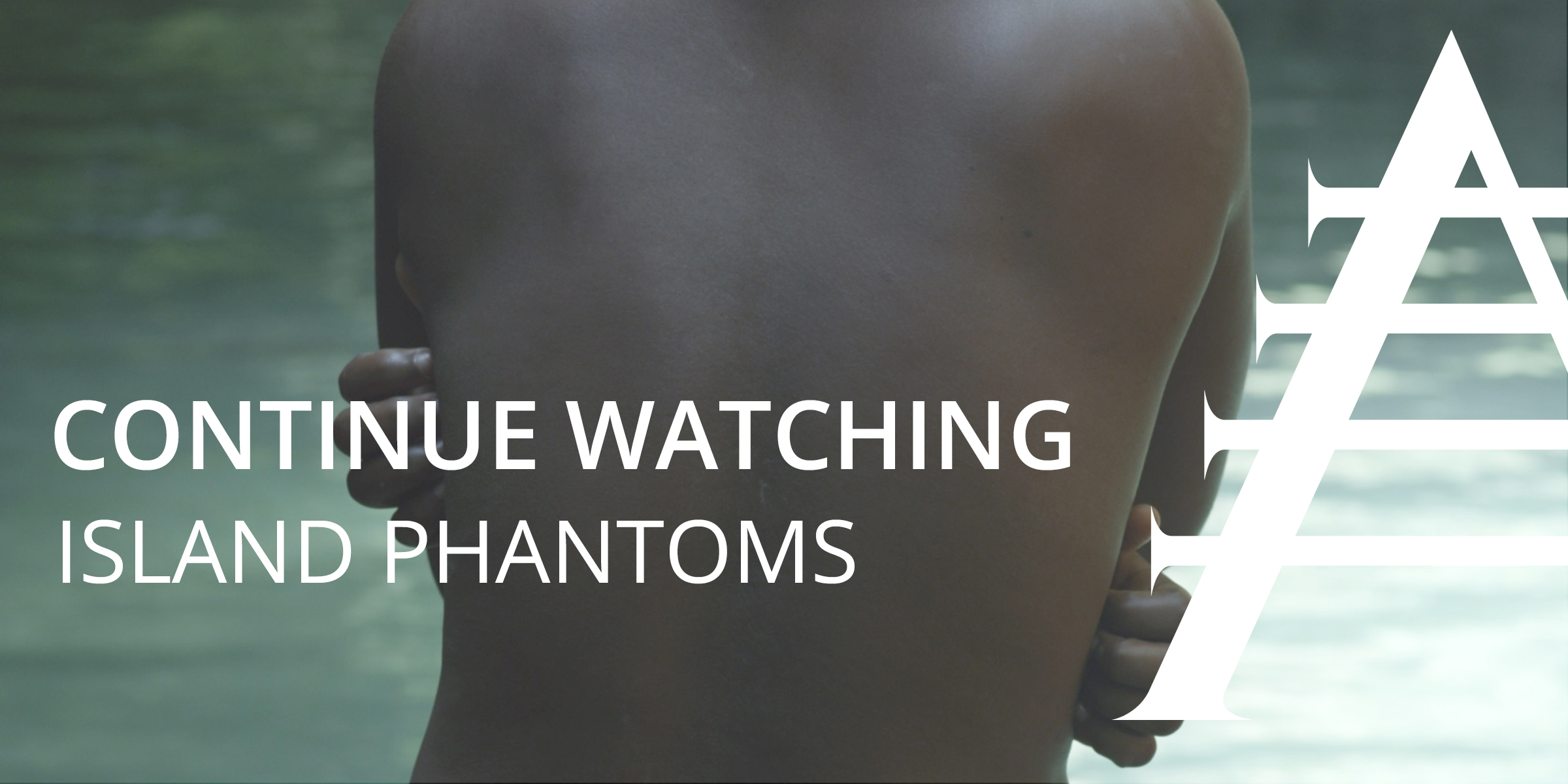 From ancestral deities and shapeshifters to water spirits and bloodsuckers, these films give form to supernatural beings that once inhabited – and perhaps still haunt – the Caribbean.

EVIL LIVES WHERE THERE IS DARKNESS
by Jonathan Ali

Last December, in Trinidad and Tobago, a seemingly mundane incident made the headlines. After a period of heavy rain, a silk cotton tree on Tobago came crashing down. The tree was relatively old – well over a hundred years, it was reported – but age alone wasn’t the reason why this was news.

The silk cotton tree is sacred to various cultures in the Caribbean and in Latin America, where it’s known as the ceiba. The First Peoples have historically believed that ancestral deities live in these massive forest dwellers. In the days of slavery, many sugar plantations had silk cotton trees, and runaway enslaved Africans, recaptured, were often hanged from their boughs; it was thought that their spirits took up residence within.

The fallen silk cotton in Tobago had a story attached to it. According to legend, Gang Gang Sarah, a formerly enslaved priestess, attempted to return to Africa by climbing the tree, spreading her arms and taking flight. Unfortunately, Sarah had unknowingly violated one of the rules of going back to Africa by eating salt. She plunged to the ground and died, and was buried at the spot. The tree became a site of religious ritual and worship, and when it fell, people ascribed special provenance to the act. It was an omen, they said. The spirits were telling us something. The media reported all of this in earnest, in a place where superstitions and the supernatural are very much part of everyday life.

The four shorts that make up the programme Island Phantoms – from Cuba, Trinidad and Tobago, and Haiti – reflect a generous understanding of this unreal reality of the Caribbean. Though the ghosts and spirits that comprise the subjects of these films aren’t visually (or rather, not literally) given form, they are made palpable through the cinematic worlds conjured by the filmmakers. They live.

A study of a Cuban silk cotton tree in black and white, Claudia Claremi’s Ceiba (2017) has the eerie feel of a found-footage silent horror film. The film was shot on Super 8mm stock that’s been manipulated, with the resulting scratches and blemishes of the image evoking the questing spirits of pre-Columbian Taíno and African ancestors. The film’s sound design, a contrasting palimpsest of birdsong and atonal scoring, reinforces the unsettling images of the towering tree. Even the voiceover, of an old man doing no more than describing the propagation habits of the silk cotton, manages to disturb.

Of course, Ceiba is a Cuban film, and Cuba means politics. The politics here, however, remain steadfastly sublimated. One is left to guess at the place of spiritual belief and religious practice on an island that is officially atheist, yet where the Catholic Church and the syncretic practices of Santería and Orisha , with their origins in the Yoruba culture of West Africa, exist. Each is tolerated, if not officially recognised.

In multi-ethnic, multi-faith Trinidad and Tobago, however, religions not only flourish and are given state sanction, but the various belief systems also often informally comingle. Superstitions, too, happily transgress community lines. Field Notes (2014), directed by Vashti Harrison, is constructed as an ethnographic documentary guide to the country’s supernatural beliefs, with the classifying rigour of an anthropological study meeting the chills of folk horror.

Harrison subtly enacts a distinction between an unseen US ethnographer, reciting a series of superstitions into a tape recorder, and similarly unseen local subjects giving voiceover testimony on a series of supernatural creatures. Meanwhile, the clicks and whirs of a projector are heard, as alternating colour and black-and-white 16mm images are presented, of the gestures of arcane superstitions being dramatised and of the rural landscapes where the supernatural thrives.

At another point in Field Notes, we see the vine-tangled ruins of a sugarcane factory. The ethnographer’s accompanying handwritten notes present a potted timeline of the production of sugar in Trinidad, from the colonial era to the relatively recent independence period. Unwritten, but not unacknowledged, is the profound suffering that enslaved Africans and bonded Indian labourers endured in the service of enriching a European plantocracy. ‘Evil lives where there is darkness,’ we further read in the ethnographer’s notes. Yes, shapeshifters and succubi might still be found in the literal darkness, but what of the metaphorical? What other demons still haunt these spaces?

The supernatural forms that inhabit the Caribbean are often presented as harmful, but subversive reimaginings reflect their potential. Shirley Bruno’s Tezen (2016), a Haitian folktale ‘collected from both memory and invention’ as introductory on-screen text tells us, refashions the feminine figure of the water spirit – the goddess Yemaya in her Yoruba origins – as an empowering force.

In this meditative, almost dialogue-free work of fiction, a young woman’s gendered daily labour of drawing water for her family’s use from the nearby river gradually puts her in communion with the liberating water spirit Tezen. A disapproving patriarchy, manifest in the form of the young woman’s duplicitous brother, will seek to quash this distaff union. But spirits by their nature can never die, or die only to be reborn.

And while some spirits seek to emancipate, others seek blood. Drei Atlas (2018) is, like Tezen, a fiction that presents us with a female spirit figure. At first glance, Miryam Charles’ film, with its lack of conventional plot, cryptic lines of on-screen text, and textured 16mm images of metropolitan city scenes at apparent odds with the unfolding dialogue and complex ambient soundscape, announces itself as a defiantly obscure work. For all of its experimental trappings, however, Drei Atlas is a vampire movie.

A murder has occurred. A suspect is being interrogated. The questions are in German (at one time they would have been in French), the replies in Haitian Creole. A portrait of the relationship between a migrant domestic worker and her erstwhile employers takes shape, an updating of the relationship between the coloniser and the colonised, the vampire and its victim. Questions of restorative justice, of who owes what to whom for the evils of history, are complex, as are the answers. As the final shot of Drei Atlas reveals, the one thing this subversive film knows is that displaced spirits – including, perhaps, the spirits of Gang Gang Sarah and others like her – eventually find their way home.

JONATHAN ALI
Jonathan Ali is a film curator and writer based in London. He programmes the Third Horizon Film Festival in Miami, Florida and is co-founder of the Twelve30 Collective, which is dedicated to screening Caribbean films in the UK. Jonathan is also on the Alchemy Film and Moving Image Festival programming team.