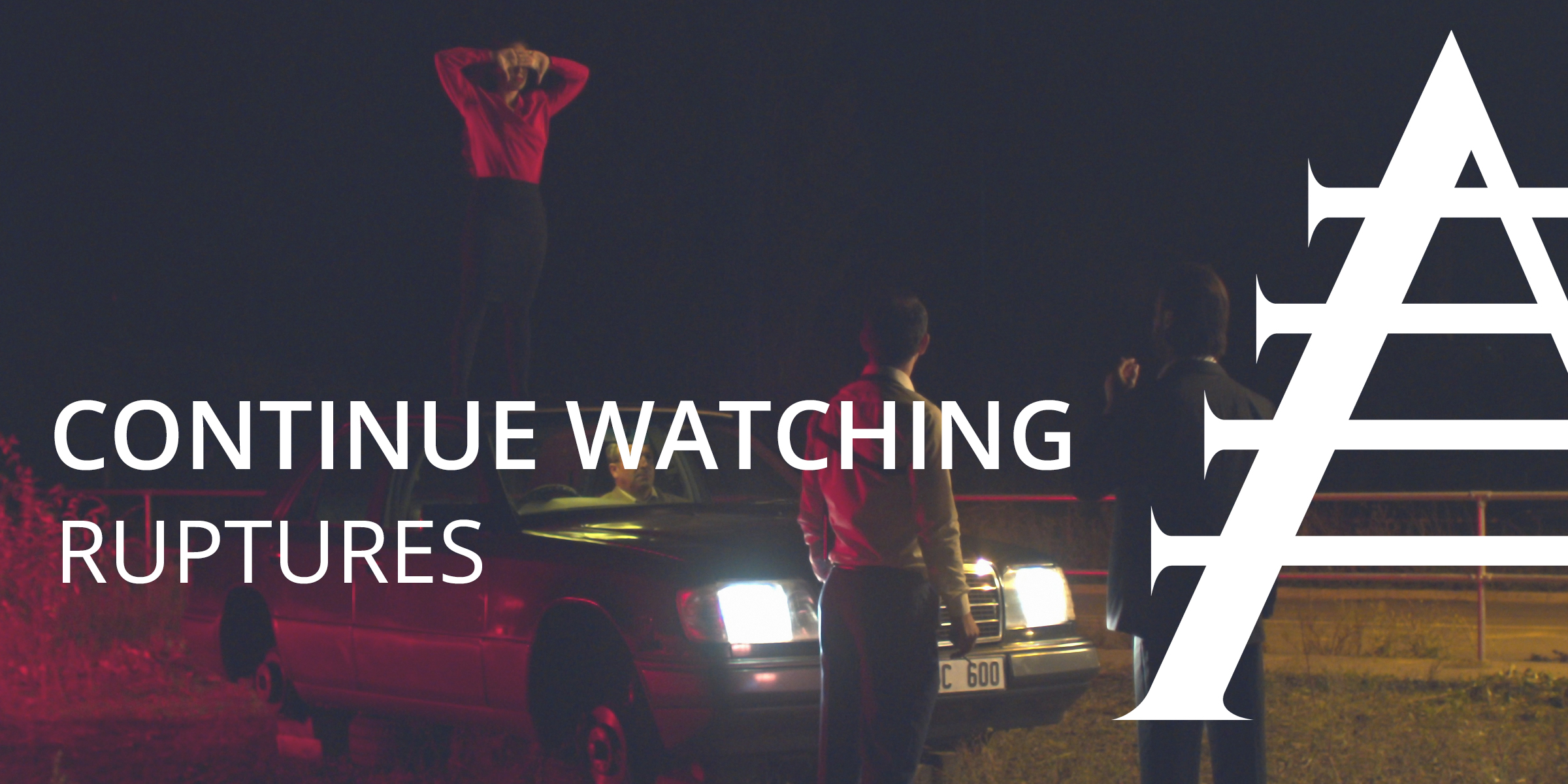 Noorafshan Mirza and Brad Butler – 66’ – UK/Turkey – 2019 | Captions available
A real-life car crash in 1996 Turkey is refashioned into a film noir road movie that speculates on a post-rupture female-led future.

In her Hugo Award-winning short story Speech Sounds, first published in 1983, the eminent speculative fiction writer Octavia Butler presents a world in which speech is both a threat and under threat.

The premise is as follows. The world has experienced some kind of pandemic that destroys much of what is thought of as ‘civilisation’, including most people’s ability to speak. Instead of names, people have symbols or signs that they carry as a form of self-identification. A form of sign language develops, but of course everyone’s understanding of the meaning of gestures is different so there are murderous misunderstandings – the threat of violence is ever present.

Speech Sounds is Butler considering how thin the veil of ‘civilisation’ is, how easy the threat of both not understanding and not being understood can lead to calamity, pushing people to extremes and the futility of violence. The story also allows space to consider our shared human need for connection, for building a ‘family’ of different types and the undeniable force that women represent when they decide to stand fully in their power.

Noorafshan Mirza and Brad Butler’s Ruptures reminds me so much of encountering Speech Sounds for the first time. One can think of them as companion pieces. Both possess the particular quality of growing discomfort and unease – that rumble in the pit of your stomach – the particular kind that is felt when female protagonists are in danger from, or at the mercy of, unscrupulous and covetous men.

In place of the typical road-movie hero, Ruptures features Yenge (Yasmine Alice), an ambiguous, glamourous woman, at first appearance a traditional, tragic, beautiful femme fatale who transforms through some kind of semi-magical process into an Angel of Vengeance. During a tense car journey where much is left unsaid, we get the sense that our Angel is in the presence of danger – a politician (Eyüp Sultan Aydın), his muscle (Devrim Evin) and his driver (Murat Erkek), who is also a policeman. We are in the company of a kind of power that can slip into malice at any moment.

Everyone is compromised. As the politician practices his Make Turkey Great Again-type speech, the viewer is invited to consider just how much of contemporary politics is performance. At one point, the politician says, ‘They are a virus. Thankfully god has given us an iron constitution. There is no virus that we can’t destroy.’ It was unclear to me who ‘they’ were in the film, but the sentiment is familiar, isn’t it? Haven’t we heard a lot of this kind of speech in 2020, as we try to survive a virus? I can imagine the last remaining politicians in the universe of Speech Sounds uttering the same sentiments, before they themselves are rendered speechless.

After a car crash, Yenge’s corrupt companion-oppressors ultimately have to face her controlled fury as a proxy for the others they have harmed, in a mysterious realm that seems to represent a place between life and death or is perhaps death itself. The film veers into the domain of speculative fiction to create a glitch, a time vortex, wherein Yenge can come into her own power. We have witnessed their callousness, their disregard and their sadism. What could match the malevolence of a handful of murderous men? An army of women.

This army meets (in a forest?), sitting around a fire. A group of not-too-young women, some Black, some non-Black, all speaking a language that is at first hard to discern. It soon becomes apparent that they are speaking different languages from around the world, smattered with English, as many people all around the world do. Some only speak English. It is as if they have access to some kind of Universal Translator, in the manner of Star Trek or Doctor Who. It is notable how English is just another language, here, no more special than any other.

Unlike that of the film’s first section, in the car, the energy of this group is contemplative, intellectual and practical as they plan revolution. What would a utopia for women look like? How might it be organised? The women, introduced in the film as The Gossip, share examples and ideas. We are left with no sense of what conclusions they might come to, or indeed exactly when this conversation is taking place. Time is elastic, reality malleable, the quiet woman is the one to keep your eye on. She’s the one with the army, The Gossip, and they are talking about how to end this shit and create something new.

At the end of Speech Sounds, Octavia Butler’s protagonist unexpectedly becomes surrogate mother to two orphaned children who, miraculously, also have speech. On the road, driving the car of the only man she could trust (who was just killed before her eyes), our heroine has to make a decision. Does she choose hope and responsibility, or despair and nihilism? Together or alone? She chooses to create something new. They begin again.

NOORAFSHAN MIRZA AND BRAD BUTLER
Noorafshan Mirza and Brad Butler live and work between London and Istanbul and have been making award-winning film and video work for 23 years. They were nominated for Film London’s Jarman Award in 2012 and the Artes Mundi Prize in 2015, and were winners at Artists’ Film International and the Paul Hamlyn Foundation Awards in 2015. Their work has been commissioned by Artangel, the Hayward Gallery, the Sydney Biennale, Film London, Film and Video Umbrella, the Serpentine Gallery and The Walker Art Centre. They were founders of the artist film and video space, no.w.here (2001 – 2018).

SONYA DYER
Sonya Dyer is an artist and writer from London, and is a Somerset House Studios Resident. She is an alumna of Whitney Museum of American Art’s Independent Study Program. Dyer’s practice explores how subjectivities and alliances are formed across cultures and temporalities, creating possible futures. As a writer and commentator on art and culture, Dyer has contributed to numerous publications including Frieze, Arts UK, Contemporary &, a-n and Petunia, in addition to her academic writing. Hailing Frequencies Open, her current body of work, intersects the Greek myth of Andromeda, the dubious legacy of HeLa cells and actor Nichelle Nicols’ pioneering work in diversifying the NASA astronaut pool in the 1970s as the starting point for an exploration of Black female subjectivities within narratives of the future.