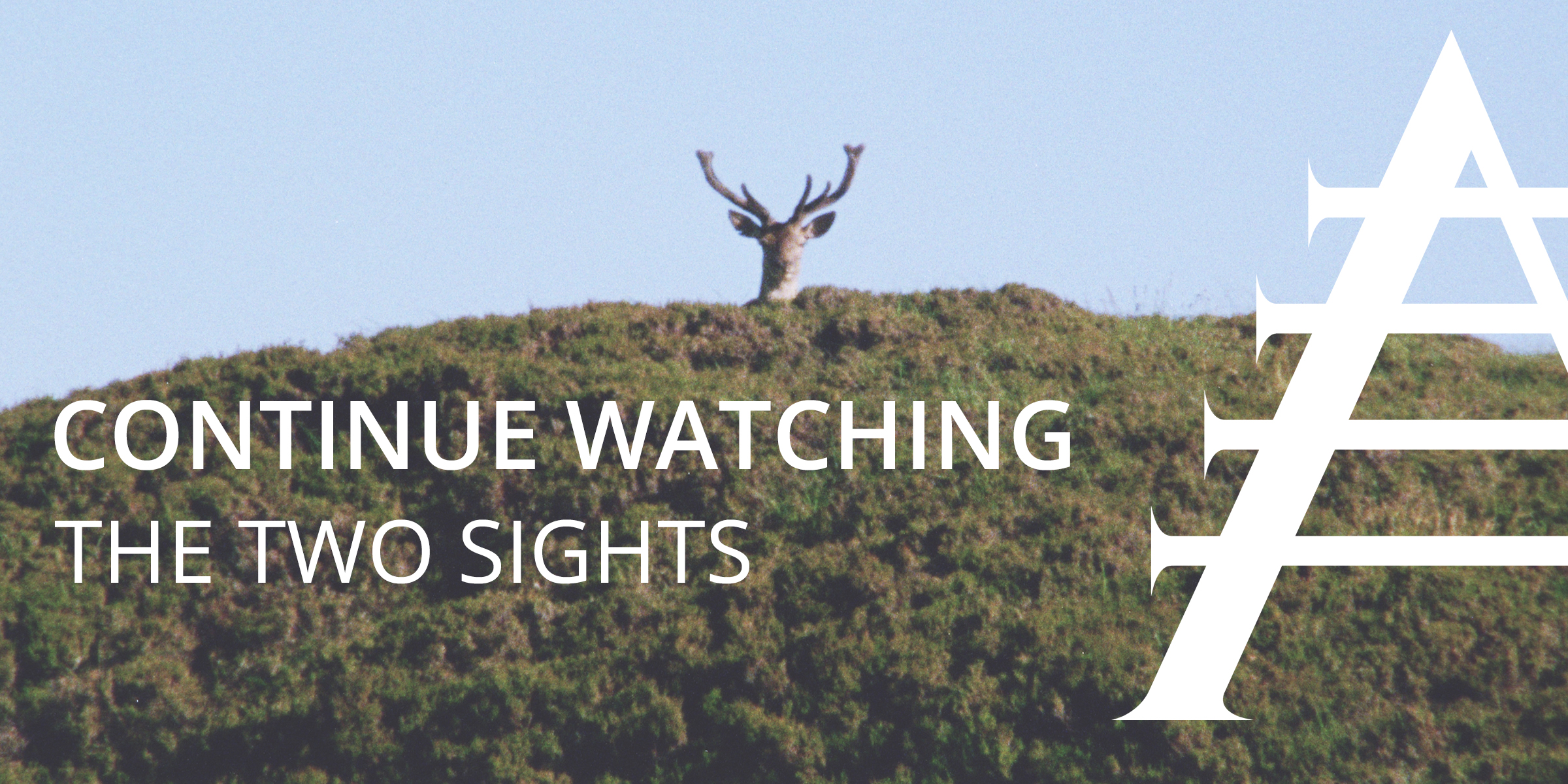 THE THIN PLACE
by Alix Rothnie

The Outer Hebrides are a crescent of islands often referred to as the Long Isle, stretching 130 miles from Lewis and Harris in the north, down through the Uists, Benbecula and Barra in the south. Sitting on the edge of the Atlantic, this is – besides a few outlying islands – the most westerly portion of Scotland. To travel the roads here is to follow the contours of the land, with opportunities to reach its 60 mph speed limits short-lived. Flyovers, motorways, tunnels and all other forms of infrastructure which bypass terrain and hasten a journey are absent. Pace, on these islands, is dictated for you.

In The Two Sights / An Dà Shealladh, Joshua Bonnetta echoes this pace. Through static shots and lingering takes, a place of rock, water and bog is slowly revealed. Yet, place is never just the rock, water or bog itself – it is the gathering of inter-connections of the human and nonhuman inhabitants, it is its histories half-buried, its weather, the languages spoken and its everyday lives and labour. Each frame of The Two Sights glimpses deeper into place: the head of a red deer stag appears over heather, fishermen pull lobster pots from the sea floor, lichen hangs from a standing stone…

To open the film, Bonnetta sets up a microphone, and thus the voices of these communities are heard – the hum of the wind and the call of the birds. I spent six weeks living on North Uist this year, and for many days the sea, the wind and the stags do battle as to which can roar the loudest. However, the sounds of The Two Sights are a euphony of muted chatter forming an ecological soundscape that gives voice to the delicate: the lapping of the shoreline or the gurgle of a diver’s oxygen tank. The film pays testament to the diversity and abundance of the ecologies and communities that belong to this place, distributing space among them and offering time to contemplate each in turn.

Throughout the film, animals pace the ageless boundary of the horizon. The line that connects the earth with the sky or, perhaps, the heavens. The horizon is a frequent presence in the film, as it is when you stand almost anywhere on the Outer Hebrides. Sightlines are unhindered by trees and buildings, and the skies dominate. Distance can always be found. Bonnetta continually plays with this line, mirroring and inverting the frame and turning the world upside down, indicating a transcendence of this boundary, suggesting that it is not, in fact, as fixed as it first appears. Often, it takes a moment to even notice the change – to see the raindrops landing in the sky.

The film moves from one story, folkloric myth, sound and song to the next. Stories that dive deep into the freshwater lochs, are buried in the shell-sands, float out across the waters, and high into the skies. Each tale, honed through retelling by those who inhabit the Outer Hebrides, speaks to the permeability of this line – the concept of a ‘thin place’, as one speaker describes. An impermanence in life and death, and the constant and unavoidable evolution of a place.

In Fraser Darling and J. M. Boyd’s Natural History in the Highlands and Islands (1964), the west coast of the Outer Hebrides is described as ‘a desert of alternating calm and storm where no plant or animal can find a footing’. And alongside such impermanence, comes loss. At the very start of The Two Sights, one islander speaks of loss – the decrease in those who have the gift of Second Sight. ‘So when this generation dies out,’ he says, ‘probably there will be no more word except in history.’ In contrast to the rate at which the weather shifts or storms arrive – carving out sand dunes overnight – is the slowness of generational change, with dominant traditions competing with emergent identities.

Loss unfolds in The Two Sights through the body of a beached whale decaying at the tideline, the forgotten ephemera of a derelict home and the collection of narratives seemingly on the brink of loss. To capture the strong oral tradition of these islands is an invaluable historical record, offering authenticity and a sense of character found in original voice. The recording of endangered languages, beliefs and customs – what anthropologists call ‘rescue ethnology’ – has existed as long as sound recording equipment has. Of course, many of those collecting oral tradition over the years have done so under the assumption of it being the final days of a dying culture. After the second world war, much of the material collected was focused on farming, fishing, and crofting communities in Scotland – traditions thought to be dying out.

Through moments of quiet, a sense of remoteness is felt in this film, paired with humbling images of solitary figures captured in wide shot in and against the landscape. Islands are bound to notions of separateness, being as they are surrounded by water. And are often, due to this, seen as preservers of culture. The Outer Hebrides hold the highest percentage of native Gaelic speakers. Being framed as marginal, however, can be dangerous, resulting in idealised portraits of distant, wild lands that are pre-modern paradises immune to change. What The Two Sights represents, and foregrounds, is the intimate ties islanders have to the natural elements of this place, an enduring connection.

In the film’s final third, two men cutting peat to fuel their homes find tree roots, preserved and fossilized in the oxygen-starved peatbog from a long-forgotten time when the Outer Hebrides were once forested. Bonnetta hints at timescales that are human, generational, geological. Spending six weeks in a place – as I did – is not nearly long enough to grasp a deep understanding of it. However, to my impression, in the Outer Hebrides, there is a durability to match images of precarity, a resilience and resourcefulness to counter perceptions of impermanence. Perhaps the divide between a culture perceived to be on the brink of dying, and one that is flourishing, is as thin as the boundary between the sky and the earth.

JOSHUA BONNETTA
Joshua Bonnetta (b. Canada 1979) is an artist and filmmaker working at the edges of documentary across installation, performance, and traditional cinema exhibition. His work has been shown at the Berlinale, BFI London Film Festival, ICA London, MOMA, New York Film Festival, Toronto International Film Festival, Whitechapel Gallery, Viennale, and others. His work has been written about in Art Forum, Frieze, Sight & Sound, Cinema Scope, the Guardian, and the New York Times. His sound works are published by Shelter Press, Canti Magnetici, and Senufo Editions.

ALIX ROTHNIE
Alix Rothnie is an artist and curator, and graduate of the MSc in Modern and Contemporary Art: History, Curation and Criticism from the University of Edinburgh. She is also currently Film Town Programmer with Alchemy Film & Arts.

She most recently worked with Deveron Projects in rural Aberdeenshire, as Town Collection Curator, managing their public art collections and delivering a public programme, following an interest in participatory practices, archives and place-centred working. Her research on feminist curatorial practice led her to assist on an exhibition of works on paper by Scottish women artists with the Gallery of Modern Art (GoMA) in Glasgow.

As a writer, she has undertaken commissions for the Centre for Contemporary Art and the Natural World (Devon), the Imago Mundi Project (Italy), the Society of Scottish Artists (SSA), and has published online through Curating the Contemporary (CtC).