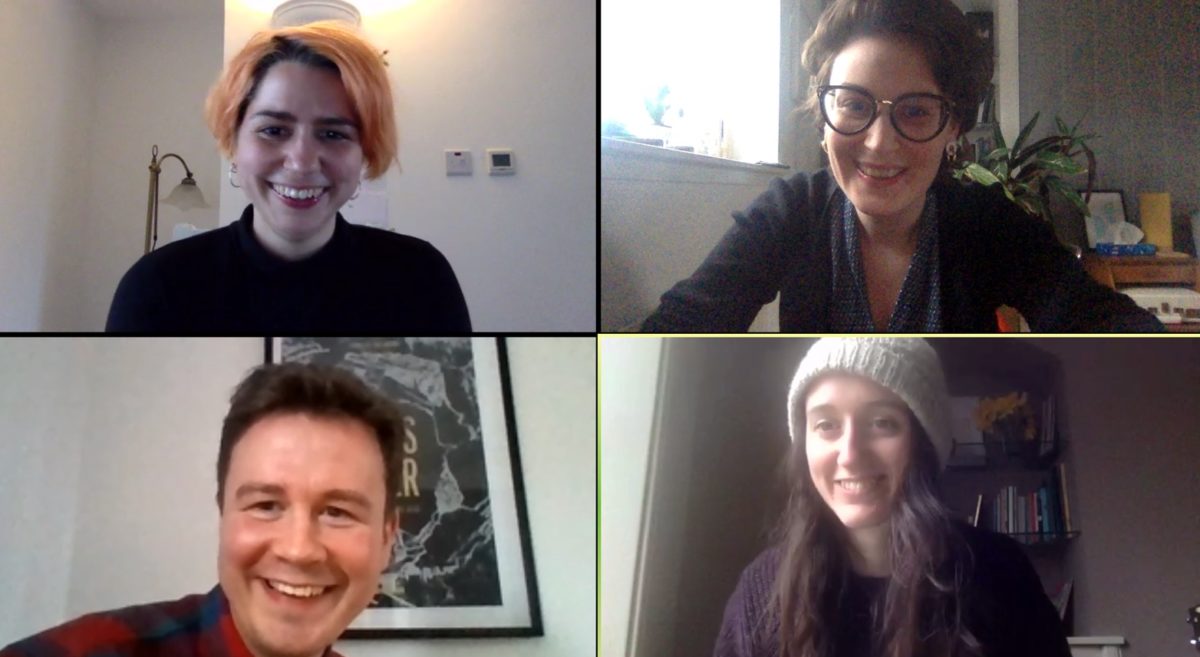 On 2 April 2020 the Independent Cinema Office published an article by Davide Abbatescianni – ‘European Film Festivals Going Virtual: A Defence Strategy or A New Opportunity?’ – profiling three film organisations that have taken their events online in response to the Covid-19 pandemic: CPH:DOX, Vilnius International Film Festival and our own Alchemy Film and Moving Image Festival.

No festival is feasible without the team delivering it. Even as a virtual platform, Alchemy Live is the work of those credited on the festival’s homepage, and we express gratitude as well to all partners and funders for their continued understanding and support. As we work now towards the delivery of Alchemy Live, the online edition of Alchemy Film and Moving Image Festival 2020, the workflow itself has become digital: group meetings are conducted remotely and regularly, including a quick chat on Zoom to screengrab headshots of equal size (not possible on our preferred app).

We publish below the full exchange quoted in the ICO’s article, between Davide Abbatescianni and Michael Pattison, Alchemy Film & Arts’ Creative Director.

ICO: How did you start the process of ‘virtualisation’ for your festival?

Michael Pattison: We started having discussions quite early. The infrastructural complexity of a festival demands an almost constant maintenance of relationships between various stakeholders, including partner venues and funders, so by necessity, in retrospect, we were keeping abreast of the situation long before we actually felt the need to.

Once the scale of the situation became apparent and the uncertainty began to affect more and more elements of our production and planning, we began to think of different contingencies according to varying levels of severity. Because a core percentage of our festival’s audience is made up of the artists whose works it shows – many of whom are international – we knew very quickly that we would need to let go of the idea of an in-person event; there were a lot of tears and much heartache. And then as soon as we began to factor in the health of our staff and those tasked with delivering any revised iteration of the festival, we realised we would need to avoid anything that depended on a single person’s technical expertise or good health.

How are you managing to coordinate this transformation in such a short time frame?

It was important for the feasibility of the festival but also in terms of mitigating stress across the team that, streaming aside, nothing would be added that wasn’t already going to be happening. We proceeded on the basis that its quality curation could be kept intact, that meaningful points of engagement within our artistic community were therefore already in place, and on the strict agreement that it would not be additional work.

As soon as that decision was made we got in touch with some organisations who we knew were planning similar things, or who had done digital streaming previously, such as Glasgow Women’s Library and Ann Arbor Film Festival in Michigan. When we found their guidance to be in line with our own research and presumptions, we contacted every artist in our cinema programme inviting them to participate and clearly spelling it out for them that this would be a once-only live stream more or less secure from bootlegging. We were also transparent about our intentions and terms: that we were making the stream available for free worldwide and hoping to connect with our far-flung international community as well as our local audiences here in Hawick.

I think by that point artists had come to expect news of a cancellation, so the offer of still being platformed with the curation intact was warmly received. There were 71 films and 75 artists to notify and every single one of them said yes, even those who ordinarily would show their work on analogue forms only. This is testament to the relationship we had already built with these artists, either during this festival campaign or previously; more specifically, thanks go here to our Communications Assistant and our Print Traffic Coordinator, both of whom had been in previous and regular contact with artists collating files, prints, images, data, and whose professionalism has allowed us to move as quickly as we have. As Alchemy specialises in experimental film and works for the most part directly with artists, licensing and distribution were less of a problem than they might be for a more industry-oriented event.

How are your programming choices affected by the Covid-19 crisis?

All of the 15 programmes that were put together for this year’s Alchemy Film and Moving Image Festival are part of Alchemy Live curatorially intact. No changes were made to the content or running order of the shorts programmes. Our priority was to platform the films and artists that came to us through our open call for submissions, which in ordinary circumstances might have a more limited shelf life due to the extent to which the festival landscape is governed by market forces and their emphasis on premieres, the never-before-seen, the Latest New Thing.

We decided that our Special Focus programmes, consisting of artists invited to screen work as part of a retrospective, and Guest Curated programmes could be wholesale postponed until our 2021 edition, because their quality isn’t determined by a so-called shelf life. The decision to cancel all in-person elements of the festival included our installations programme – usually held at free-to-access venues around town – as well as our expanded cinema performances, discussion events, delegate dinners and the opening reception, all of which are integral elements of the festival experience and just as curated as anything else in the programme.

How will you try to maximise outreach? Any good practices to share?

Streaming isn’t yet standardised to the same degree that cinema viewing is, because it comes with so many more variables such as internet speed, browser preference, device hardware and so on. So we accept that we will need to think of how to equip audiences, ahead of the event, with the means by which to view our platform in optimum conditions. The key for anything we do is to keep copy clean, to keep information clear, and to be as transparent and consistent as possible across all channels. You need to signpost what is happening and where, and you need to allow time for the key terms and phrases of any campaign to take hold.

How are you planning your work on interactivity and how will you organise your premieres? Who is taking care of implementing the required IT infrastructure?

We’re doing it ourselves, remotely, meeting virtually at regular intervals to work through logistics as well as ideas. The reason why we’ve been able to proceed with any of this is because we have a team of positive, confident and forward-thinking professionals who are able to draw upon a range of technical experiences while staying open to developing new skills.

What are the most challenging aspects in terms of engagement? What are you doing to limit/prevent financial losses?

The most challenging aspects of any engagement campaign are building an economy of belonging – a desire in many people to participate or be involved in an event as an end in itself – and logging or monitoring the impact of that in qualitative terms.

In broader terms, how do you think the European film community and its festival circuit is tackling the crisis?

Much better than it’s handling our climate crisis.

Feel free to share or highlight anything else that could be useful for the festival community in light of the new possibility of going 100% digital.

I think the key is to accept this moment at the very least as an opportunity to slow down and take stock. I’m not convinced that the solution to the present problem is merely to do more, or to continue dumping content into what was already a saturated market. Prioritising staff means protecting jobs, fees and salaries in the immediate term, yes, but it also means rethinking the property relations that created widespread precarity in the first place, and which continue to govern mass levels of anxiety and inequality across the arts sector and within the film industry. Why are we bending over backwards to patch together a system that was demonstrably so prone to absolute collapse within a fortnight?