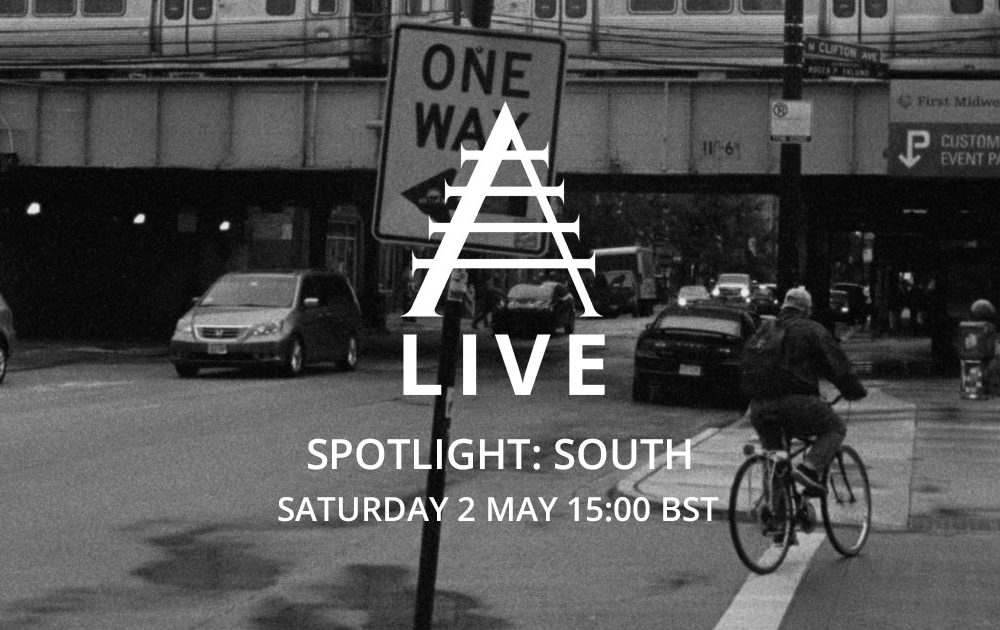 In the space of less than two years, British artist Morgan Quaintance has created an impressive, and impressively distinctive, body of moving-image work. From his Hysteresis trilogy, considering the effects of historical narratives on an ahistorical, amnesiac present, to his travel ‘letters’ exploring conurbations as disparate as Tokyo and Dakar, Quaintance’s films reflect and refract reoccurring formal strategies and thematic concerns with bravura and assurance.

South extends these strategies and concerns, while also incorporating autobiographical considerations, in a bold integration of the political and the personal. It’s a study in solidarity, with black-and-white archive footage, photographs and illustrations mixed with freshly shot, mostly monochrome 16mm footage and Google Street View images. Bracingly resisting nostalgia, the film privileges two integrated, anti-racist liberation movements at different junctures in the twentieth century, both in southern spaces where Quaintance has lived.

The first space is Chicago’s South Side, a charged site of the Civil Rights struggle in 1968. Here Quaintance uncovers a hidden history of unlikely individuals from the margins making common, class-based cause, including a woman from a poor-white background in the Deep South who runs for vice president on the Peace and Freedom party’s ticket alongside Eldridge Cleaver.

South London is the second space, where in 1986 collective action against the Apartheid system in South Africa, reflecting the zeitgeist, manifests in a celebrity-studded charity concert on Clapham Common. The film’s coda brings us to the present, its piercing, if oblique, intimations of the artist’s mortality – MRI imaging serving as a sort of memento mori – buttressed by the most effective cinematic deployment of Barry Manilow’s ‘Could It Be Magic’ you’re likely to experience.

Indeed, a provocative obliqueness is a touchstone of Quaintance’s practice.  Montage is often conceptual. People given voice are not directly identified. The objective, however, isn’t studied obscurity or hollow playfulness. Rather, Quaintance, polemical but never didactic, seeks to inspire within viewers an active spectatorship. As with the participatory, direct-action nature of the movements it investigates, South invites us, individually and collectively, to participate in the making of its meaning, with the attendant social responsibility that implies. 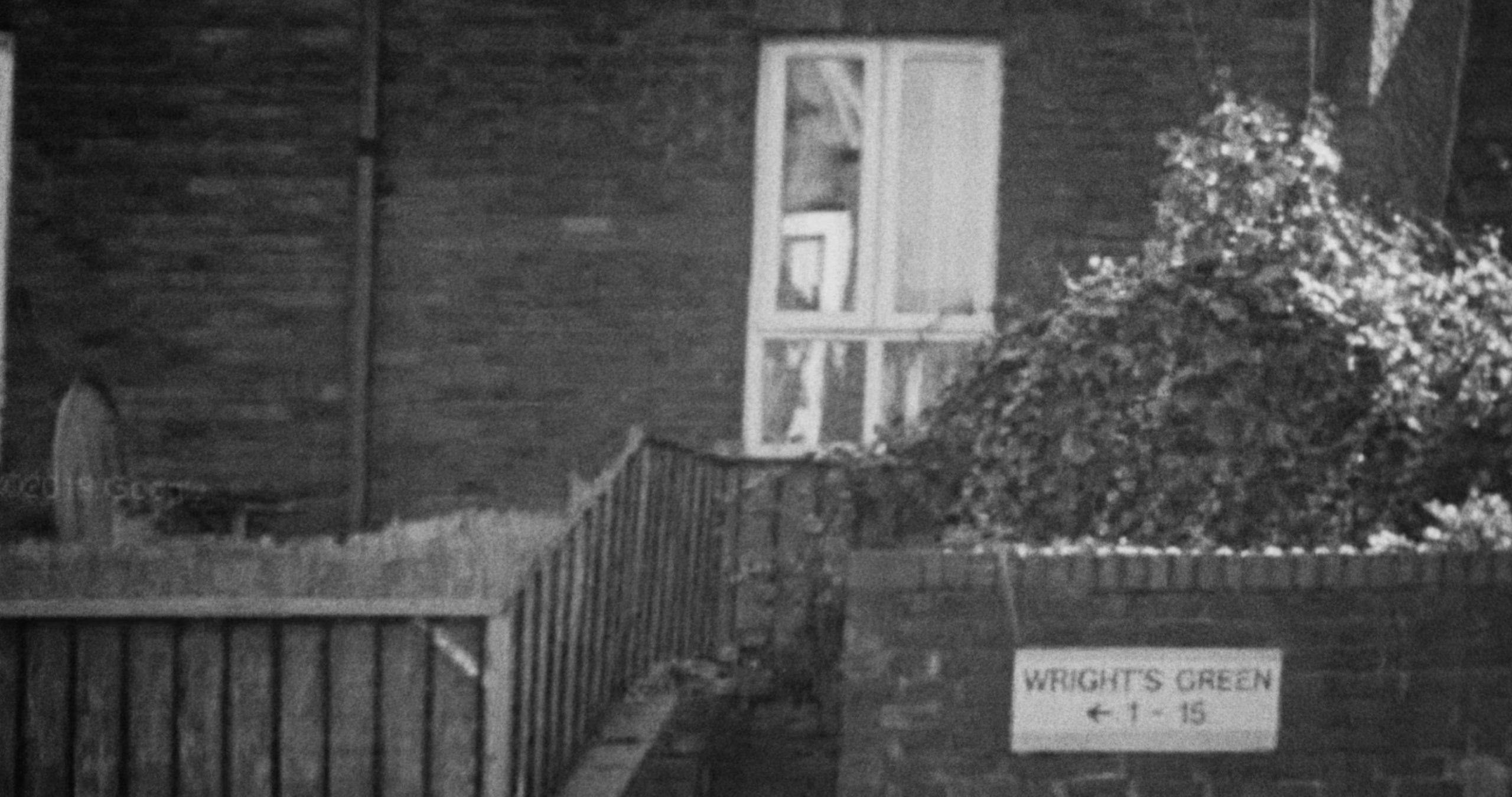 South ranges across a raft of southern spaces, relative and absolute, so named – not merely the South Side of Chicago and SouthLondon, which serve as the film’s points of departure. There’s the Deep South, South Africa, even South America – one of the film’s subjects or protagonists is from Guyana. Is this merely a convenience, or do you see something more, politically speaking, in the nature of southern locations?

Morgan Quaintance: Well the locations are all places that I have either a familial or historical connection to. I grew up in both South London and the South Side of Chicago and so that’s how it all began. The film is really a kind of self-portrait. On the surface of things, it’s about these locations and the two liberation movements that took place in them, but it’s also very much about my own life, aspects of my own biography and the progressive histories that have contributed to the sort of person I’ve become.

In London, I grew up in Clapham and lived a few minutes from Clapham Common. The anti-apartheid concert was something I remembered from my childhood, and the same goes for the general wave of anti-apartheid activism – from simple fruit boycotts, to more complex forms of protest – that everyone across racial, economic and religious divides took part in. The history of Chicago, that moment when Southern whites and blacks got together to resist the brutality of the state administration and its police force, is much less well known, but I felt that somehow it too was a part of my own biography. Then for Guyana, Barbara Van Praag is a family friend who taught my grand mother to sing.

When I started to think of putting together a film that explored these things and the part they played in my life, I quickly realised that the common denominator in all of this was the south as a geographical location, as either a destination, or a place that was departed from. I’m not sure if I’d argue that there’s something unique to southern locations in terms of politics, but I’m definitely biased when it comes to that geographical location over the north. At least I am in the city of London.

How did you come across the subjects or protagonists who appear in the film? Someone like Peggy Terry, for example, the Southern white woman who ran on the Peace and Freedom party’s ticket for vice president alongside Eldridge Cleaver – what a fascinating story hers is.

I found out about Peggy Terry through reading Amy Sonnie and James Tracy’s brilliant book Hillbilly Nationalists, Urban Race Rebels, and Black Power. I read the book about six or seven years ago and I was struck by how incredible and important it was. The book basically tells of how white and black southerners who migrate to the north and find themselves in Chicago develop a common bond over class politics and civil rights. This is a history that gets overlooked time and time again when people recount a kind of neat and discreet narrative of civil rights history and radical black power politics in the 1960s and ’70s.

What’s sinister about this tendency to overlook or smooth out the complexities of history, is that it really keeps evidence of actual progressivism and solidarity from the people whom it could benefit the most. One of the quotes from Terry that stays with me is about how poor people are very divided, or isolated. I think this is deliberately fostered so that they can be played off against each other and instrumentalised by those with an interest to exploit the poor.

Hy Thurman, one of the other voices who speaks in the section on Chicago is an activist who was part of the first conversion of street gangs into politicised activists. He’s moved away from Chicago now, but is still very much active and involved in progressive work. Then for the Anti-Apartheid Movement section, Christabel Gurney and Lela Kogbari were both people I tracked down through the movements amazing archive that is still online.

The film considers the power of individual and collective voices. There’s a tension between the two as well, between the solidarity in the histories of the movements presented in the first two sections and the final, present-day section, with its stark focus on the individual, the personal. Would you say something about this?

I think in making the work I knew that it would move between abstraction and a form of documentary that might be recognised as more straight, but the whole thing would operate within a kind of impressionistic domain. Linked to those two poles would be personal references that were more indirect and then the historical references that were more clear. These aspects are presented fairly neatly as they bookend the film. So the work opens with this evocation of the individual as island from Yusef Komunyakaa’s fantastic poem ‘Islands’, and then both the film and the location begin to birth themselves almost.

So, I wanted to start with white leader as the most basic unit of filmmaking, then use the images of migration from the country to the town, and then use the flow of water to suggest the basic element necessary for the survival and creation of cities. Then Barbara introduces the theme of voice as power, which is taken up with instances of collective empowerment in Chicago and London.

However, when I was focusing on these instances of collective power, my own sense of individual fragility became more present. So finally at the end of the film the previous material sort of collapses in on itself and merges with considerations of my own mortality and fragility. I think this might be a familiar dynamic for anyone who is involved with activism or political work. I’m not classing myself as an activist – I wish I was, but I know actual activists and that work is unceasing and really selfless – but I think even a small engagement with these things means that you move from moments of power in collectivity and fragility in isolation.In some ways spending so much time thinking about the collective good will always throw you back on yourself, in those moments in which you are not engaged with the collective activity. You know those existential questions like who am I, what am I doing here and so on still remain.

And that final section, playing out to Barry Manilow’s ‘Could It Be Magic’, brilliantly. What inspired the selection?

Ah, I’m glad you liked the music! I heard this version of the song when I was over in Chicago shooting the street scenes in ‘Uptown’ and I knew I had to have it as the end of the film. I thought it was a really uplifting and transcendent piece of music. I guess it has all that epic production that was in effect back in the ’70s, with the choir and the strings, and it just keeps evolving and developing. I knew it would be the thing to lift the audience out of a kind of steady viewing state into a territory that was far more affecting and exhilarating.

Coupling it with the MRI scan was deliberate and is essentially a riff on mortality and the possibility of finding something positive within chronic illness. There’s loads more to say about it, but I’ll leave it there I think. At the moment I still want it to remain kind of open and unfixed to a definite interpretative intention. I’ll let audiences be guided wherever they’re own sensibilities take them at the moment. The main thing is that they take them somewhere.