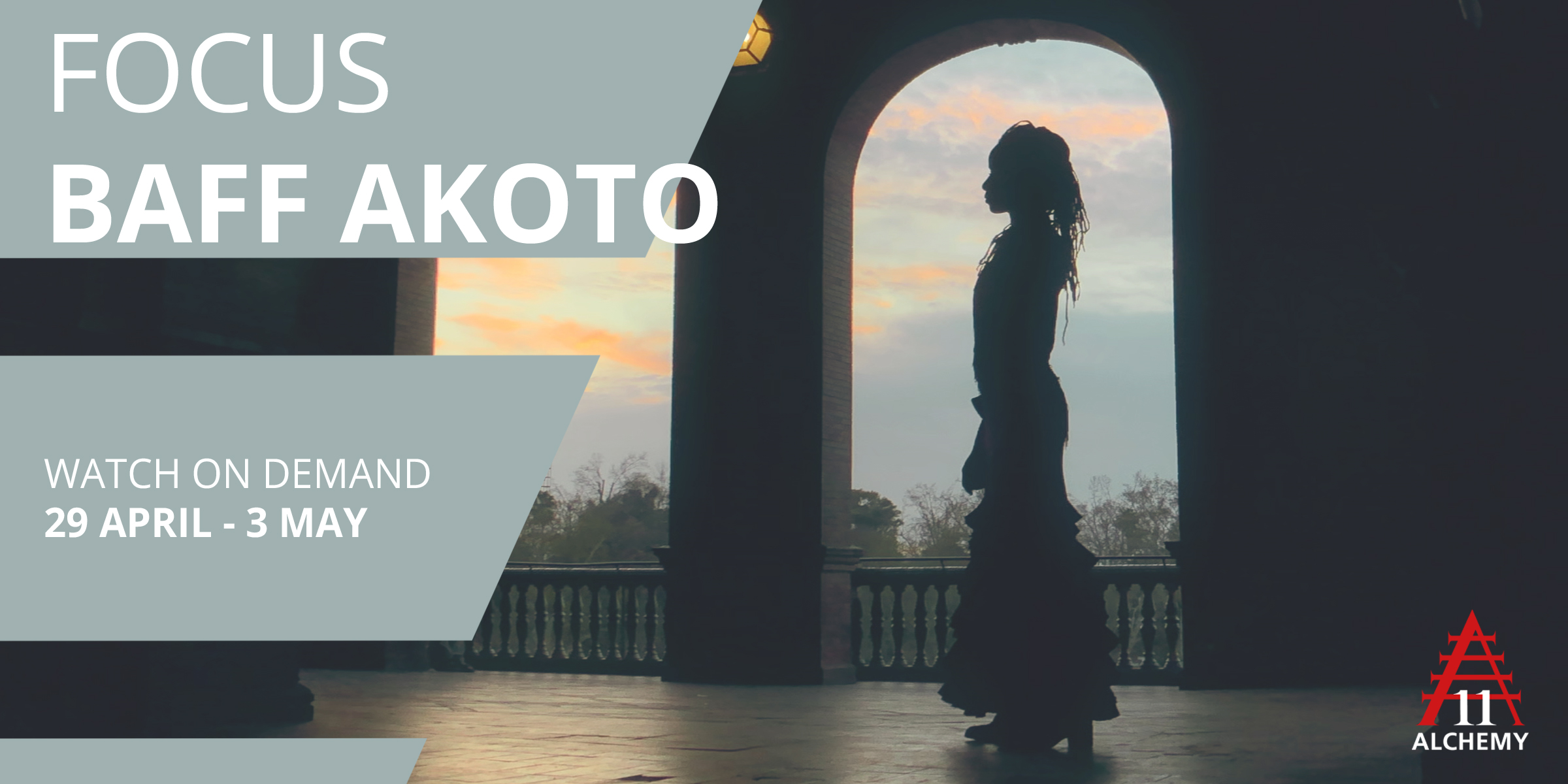 Raised in London and Accra, Baff Akoto is an artist working across multiple mediums. He is currently busy with his next VR/immersive project and the following two artist film works in the Leave the Edges trilogy. A self-taught filmmaker, Baff is interested in the fluidity of visual grammar and characters who wrestle with notions of identity and self-perceptions. His practice has been shaped by mentors including the acclaimed artist John Akomfrah and the Oscar-winning Asif Kapadia. In 2018, Screen International tipped Baff as a ‘Star of Tomorrow’. 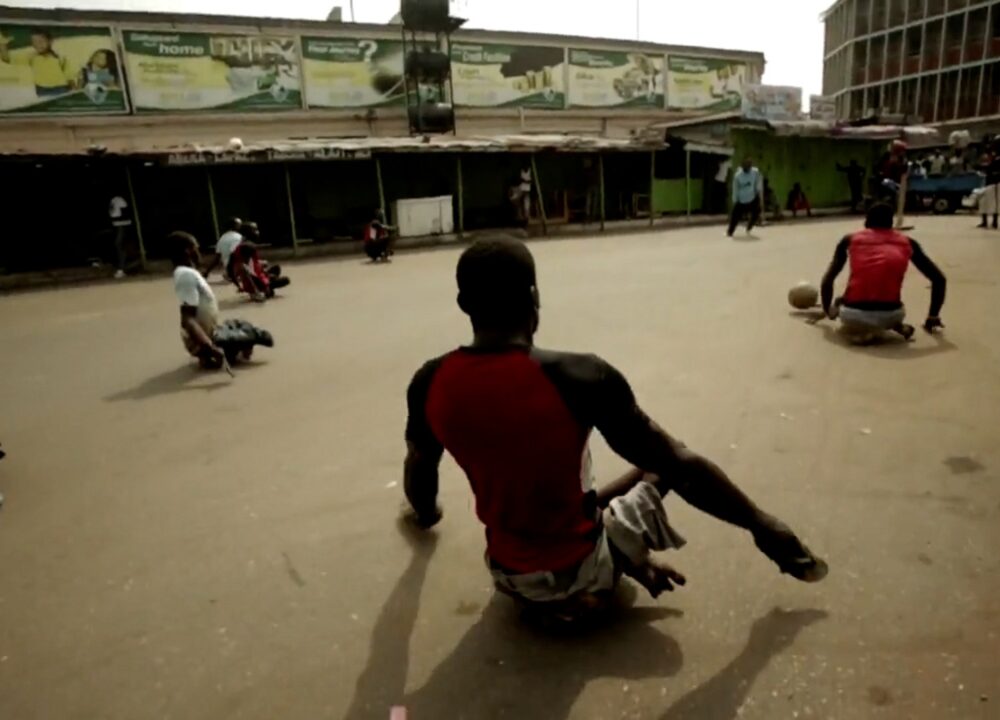 SITDOWN
Listen to a conversation between artist in focus Baff Akoto and artist and curator Ronan Mckenzie, whose commissioned essay on the programme can also be read below.


A transcript of Baff and Ronan’s conversation can also be read here.

BECOMING ETERNAL IN YOUR JOY
by Ronan Mckenzie

To enter into the world of Baff Akoto’s reoccurring dreams is to allow oneself the luxury of time not often given to exploring the nuances or plurality of experiences of the diasporas. To not just view but become a participant in the celebration of life that is presented in front of us throughout commercial and personal realms, subverting the general impression of commerciality not being a space for story, but a bridge to opportunities of further expansion of ideas which are closer to the heart, and resting on the soul.

West London-born Akoto grew up with one football boot-clad foot firmly in the UK, and the other sole planted in Accra, Ghana, through frequent visits following his first trip at six months of age, until eventually settling into school there as a teenager. Conscious of leaving what he then thought of as ‘the centre of the world’ – London being a very specific melting pot of remnants of colonial empire, creating a unique collection of global culture – Akoto was then immersed in his heritage and culture, with the opportunity to make Ghana home. Akoto was thrust into pan-Africanism and global diasporic culture, whose prominence was ever more visible – a journeying of which the value grew as time passed, and which has continued to inform the aesthetic and perspective of Akoto’s works.

There is a freedom in allowing oneself to be specific in intention, in the gentle guiding of the viewer down a path of moving-image pieces which evoke a welcome familiarity. ‘There is a way in which people who aren’t of a culture can recognise the universality in a piece of work which speaks to a specific point of view,’ Akoto notes. ‘Humanity is an exercise in empathy.’ Akoto’s short-form earlier works which introduce this Focus programme are a playing; the informal training of the untrained eye through editorial work, music projects and commercials that fluidly create space for themselves between long-form documentary and TV drama works, which allowed for a grounding of craft, and made up a solid foundation off which to leap.

It is within these earlier works where Akoto’s interest in biomechanic anthropology cemented. His longstanding interest in the body churned and thickened: ‘What one’s body is able to do, how it presents, and what that will mean for you in terms of quality of life, ease of life, and status.’ These are ideas of continual standing and questioning – from Pour Hommes (2010) to Shirts vs Skins (2015) and Rolling On (2015). These investigations are fingertips to hands carrying the lived experiences of the ‘disaggregation of Blackness’, which Akoto describes as a ‘lifetime of unpacking’, it being ‘to breathe and understand that there are a million different ways that you can be Black, and that’s okay’. Be it the playful repetition of Eno Williams’ movements in Let’s Dance (Yak Inek Unek) (2015) by Ibibio Sound Machine or the gradual building of her physical being to represent the plurality within our stories, our statements and our stances, Leave The Edges (2020) – which is also available on-demand, 29 April – 3 May, with audio description for blind and partially sighted audiences – is a culmination of the coming together of Akoto’s learnings, the meeting point at which the fork of his experiences harmonise in a longer, investigative piece.

Leave the Edges is purposeful in creating a clear vision of Akoto’s perspective. Akoto presents the viewer with a generous plate upon which each element has been measured to ensure the balancing of the light, space, and most generously, time. When the plane ahead is wide, it’s for the viewer to look to the corners, and to be encouraged between the frames. It’s to explore beyond, way into the distance of the blue-pink sky, to the building on the horizon. It’s to the figure crossing the background, and the tension in each finger of the dancer as each ripple of fabric flies free with each spin, and to the ruffles of her hem sitting just so. It’s to notice the posture of the figure to the left of the screen, as Akoto allows the viewer the privilege of becoming submerged in the scene to a point that engages with an innate sense of touch and atmosphere. It’s to create a visual environment in which the experience is one that flows through one’s body, responding from a pre-verbal state of observation and acceptance, of what is without a judgement of what one knew, what was before.

Becoming is a lesson you teach yourself every morning. — Leave the Edges

Within the warming arms of Akoto’s practice, there is a celebration of the everyday exemplified. Such documentation is rarely afforded to Black communities, yet the importance of acknowledging such tenderness and sensitivity is monumental in rebuilding a sense of self. Where becoming is a journey taken not out of loss, but of love.

RONAN MCKENZIE
Ronan Mckenzie is a multidisciplinary artist from Walthamstow, North East London. Her work began in photography, but since has extended into directing, curation, sculpture and design. Mckenzie’s photographs have been exhibited at spaces including Aperture Foundation, Red Hook Labs, Somerset House and The National Theatre, and within the inaugural show at Mckenzie’s multi-functional art space HOME by Ronan Mckenzie. Notable within Mckenzie’s practice is a sensitivity to honest, relatable emotion and the celebration of individuality. Alongside working commercially and editorially, she lectures at universities and institutions. Her work is often tied together with her passion for creating more imagery and spaces to encourage and explore connections, tenderness relationships and black joy.