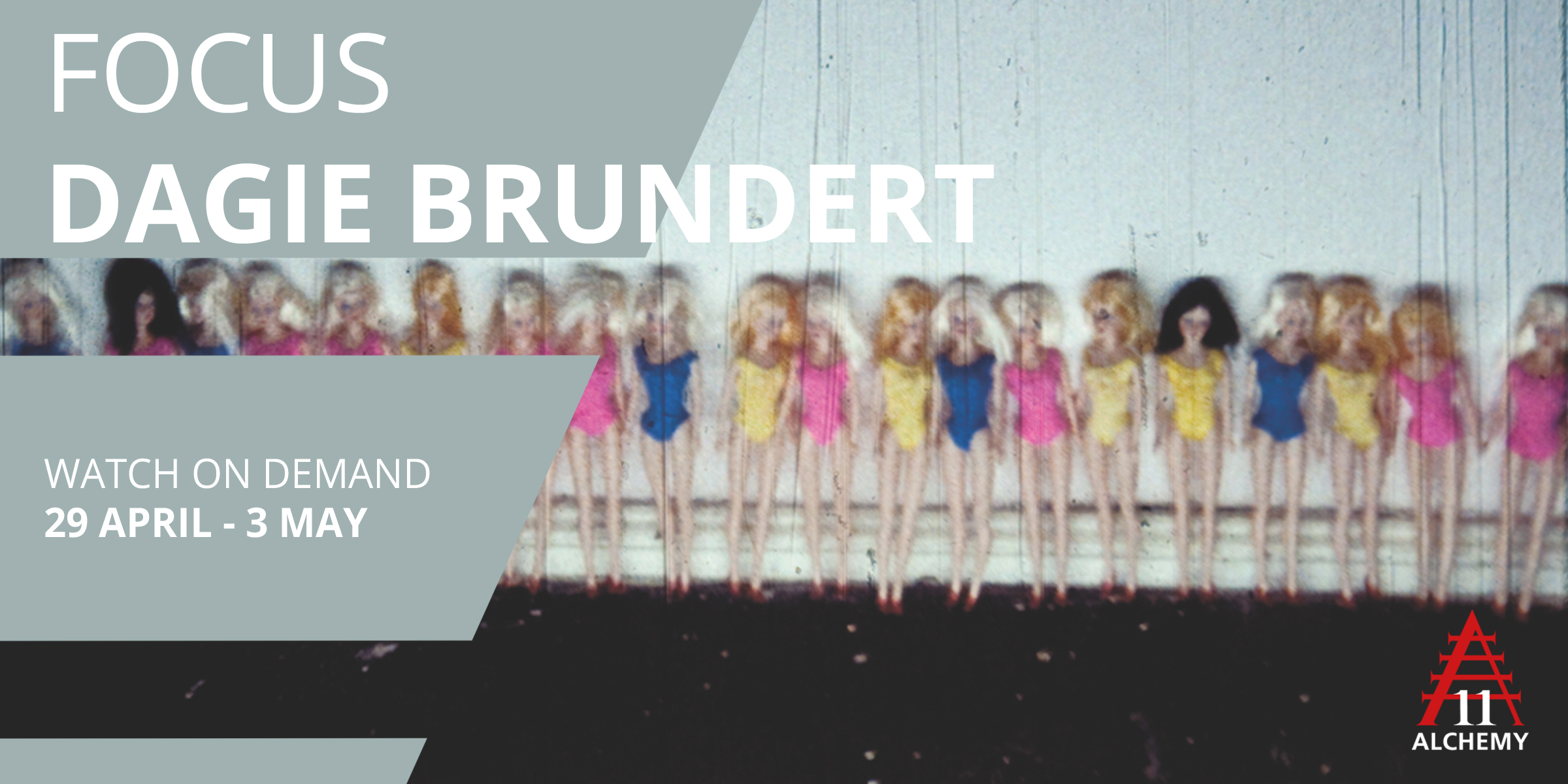 Born in a small town in West Germany, Dagie Brundert is a Berlin-based filmmaker and pinhole photographer who fell in love with her Super 8 camera in 1988. She has been an artist in residence at Echo Park Film Centre (Los Angeles) and LIFT (Toronto), and is the recipient of lifetime achievement awards for Super 8 films at Images Festival (Toronto) and Open Air Festival (Weiterstadt). Since 2008 she has delivered workshops across the world on alternative, eco-friendly film development techniques. 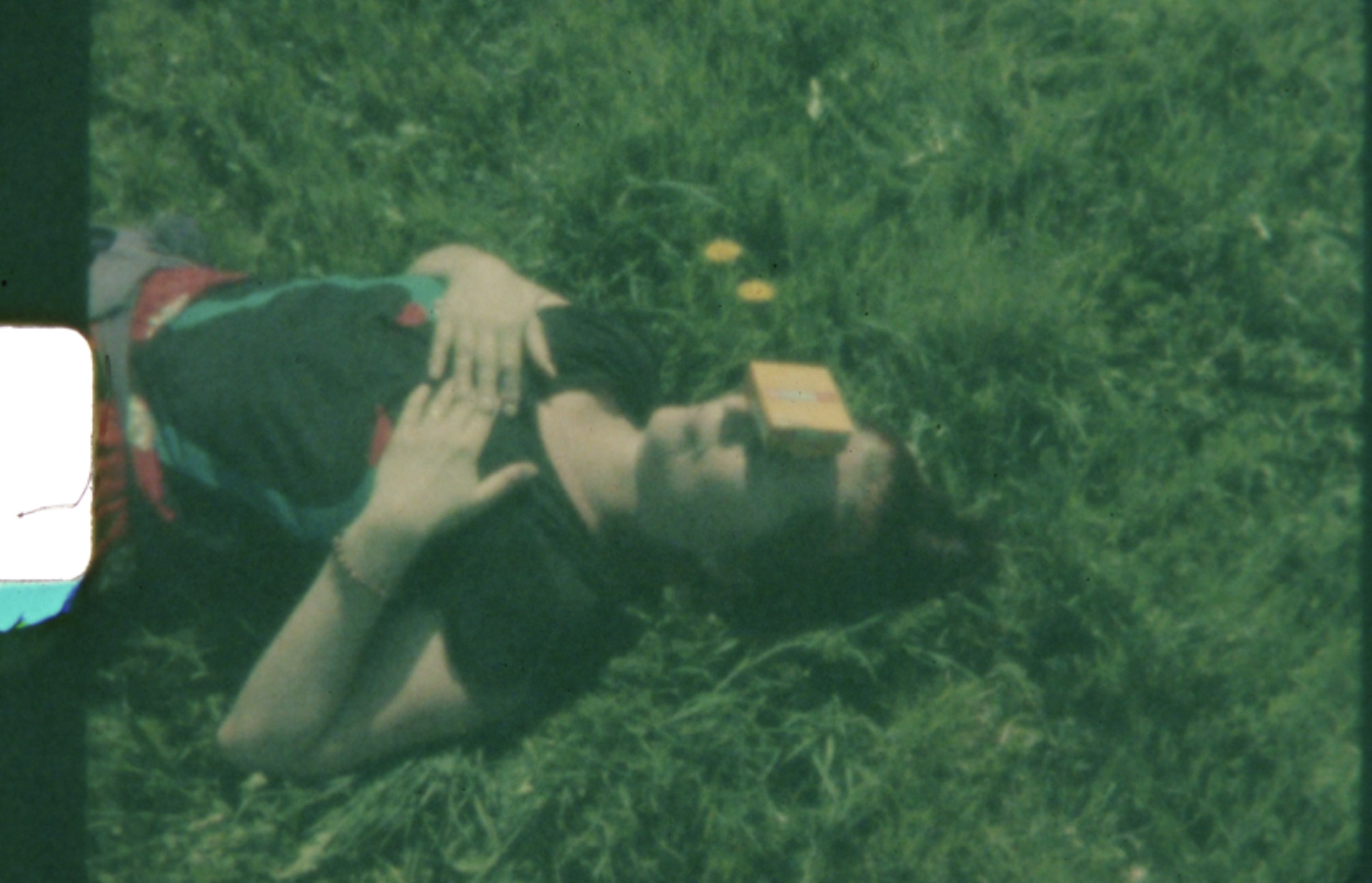 SITDOWN
Listen to a conversation between artist in focus Dagie Brundert and filmmaker and curator Lydia Beilby, whose commissioned essay on the programme can be read below.

A transcript of Dagie and Lydia’s conversation can also be read here.

WORMHOLES AND SWINGCHRONICITIES
by Lydia Beilby

And so, to immerse ourselves in the glorious, sensory cinema of Dagie Brundert, the botanical film alchemist whose highly subjective explorations of the natural world, and joyful performative interventions, find their perfect micro-drama form in the Super 8 medium she has joyfully inhabited for the last four decades.

For Brundert, image-making and life form a natural, symbiotic continuum in which the two elements are umbilically bound, through both application and aesthetics. Brundert’s camera is her constant companion. Indeed her films might be read as miniature postcard transmissions from her many and varied adventures. The camera is a mobile memory device; small, compact, lightweight and quick to load with film, and Brundert wields the trusty Braun Nizo not just as an extension of her eye, but her body too.

Through a characteristically nimble and responsive approach, Brundert is completely open to (and frequently led by) chance and happenstance, while implicitly trusting in the medium to imprint the aura of precious, yet transient moments into the very fabric of the film’s emulsion. There can be no fixed sense of the footage captured until the latent images are brought into being in the darkroom, but Brundert’s absolute belief in the integrity of the image, and the inherent ‘magic’ of the photochemical medium, is clear and evident. Brundert’s enthusiasm is infectious, and implores us to embrace this spirit of investigation and discovery, a principle she terms ‘The Wabi Sabi in Super 8’:

You extend your antennas and begin to notice the subtle beauty that exists in so many banal, imperfect, impermanent and incomplete things and existences.

Within this ethos we can trace a resonant lineage between the feminist post-punk subculture that flourished in the late 1970s and Brundert’s films, with the energy of punk reconfigured to reflect female-centred and focused narratives. A spiritual sisterhood is illuminated here, and the same quietly defiant, radical, DIY ethic exhibited by pioneering bands such as the Raincoats, UT, Young Marble Giants and Kleenex/LiLiPUT, is also manifest in Brundert’s vast body of work, with acutely personal and reflective artmaking forms combined with improvisation and playfulness.

There is a powerful reclamation of the small-scale, the domestic and the personal, as embodied in vinyl statements of intent such as Adventures Close To Home by the Raincoats (1979), which highlight the uncanny and unexpected elements that can be found in the prosaic, the everyday, if one only takes a moment to pay close attention. We see this reflected too in Brundert’s films, in the boundless joy she finds in the colour and curiosity of a street vendor’s fruit stall in The Fruit Man on Alvarado Street (2013), or in Jeans On (2016), a lysergic ode to the possibilities of the open road, stretching alluringly ahead. Observed through the camera-eye, all episodes, encounters and interactions are imbued with a sense of significance. Here is the act of an artist making things from what she sees around her, with her process evident both in front of, and behind the lens, action unfolding as the camera rolls, with images creating reality as much as they represent truth.

Brundert’s practice takes a holistic form in which experimentation is expressed not only in the visual language, but in the importance the artist places on the creative act of hand-processing her own work. In this constantly shifting, exploratory process, Brundert does not seek to replicate the pristine results of large-scale, machine-processed laboratory filmstock, but rather foregrounds ecological and tactile concerns. A work such as Rusbus (2011) creates an environment in which the photochemical material might ‘speak’, in order to perform its own materiality. The long-expired Orwo stock processed in too-hot chemistry, setting forth an arsenal of tiny vibrating pinwheels that completely overwhelm the image; a sculptural document is formed of an encounter between material, maker and natural elements:

I developed the film in kelp and fixed it in ocean salt. Maybe a mistake: it looks like the ocean nibbled and chewed it! — Salt Eats Film (2019)

There is a musicality to Brundert’s practice, a collage-like cadence in bringing into dialogue numerous active elements to facilitate the harvesting of images that bear tangible traces of their very essence, and inlay a physical sense of place into the frame. This is embodied to exquisite effect in Jacaranda (2013), in which rhapsodic images of the Jacaranda in bloom, are processed in a ‘soup’ consisting of blossoms harvested from the very same tree, in combination with washing soda and vitamin C: process directly in rhyme with material. Open and democratic working processes characterise Brundert’s approach, and here is an artist who freely makes available the recipes of her eco-friendly film processing experiments on her YUMYUMSOUPS WordPress site.

A restless appetite drives this innovative repurposing of ingredients foraged from nature, or easily and inexpensively sourced at the supermarket. Which are then utilised in exploratory variations of Dagie’s trademark caffenol chemistry recipe (consisting of tap water, coffee granules, washing soda and vitamin C). Playfully substituting the caffeine for ingredients such as beer, tree bark, mushrooms and rosemary, the outcomes of these experiments are delightfully unexpected, and frequently visually dazzling. Brundert meticulously charts her findings online, noting the particular aesthetic idiosyncrasies of the ingredients, such as the soft grey tones afforded by tree bark or the subtle yellow sepia of a seaweed developer. This is an artist blazing a trail for a circular practice with sustainability and knowledge-sharing at its core, rejecting corrosive and environmentally damaging chemistry, and incorporating instead resonant elements that are locally sourced, or foraged seasonally within the natural landscape. And perhaps it is here that we might locate the political consciousness in Dagie Brundert’s work, with process as politics, and ecology as activism.

LYDIA BEILBY
Lydia Beilby is an artist, curator and educator whose practice focuses upon analogue film media, public programming, collaborative community projects, and educational work with groups of all ages. Working with 8mm and 16mm photochemical film, and archival ephemera, Lydia has a particular interest in the tactility and physicality of the analogue medium, and these qualities are foregrounded within her own working methodologies. Lydia’s practice explores the camera apparatus and projection medium as both a performative process, and an extension  of the body, and this way of working centralises hand-made, artisanal, co-operative and  environmentally sustainable approaches. As a curator, Lydia has held roles with Edinburgh International Film Festival since 2009, taking  the role of Short Film Programmer in 2010, and since 2019 as programmer of the Black Box strand, which brings together short and feature-length experimental and artists’ film from around the world.