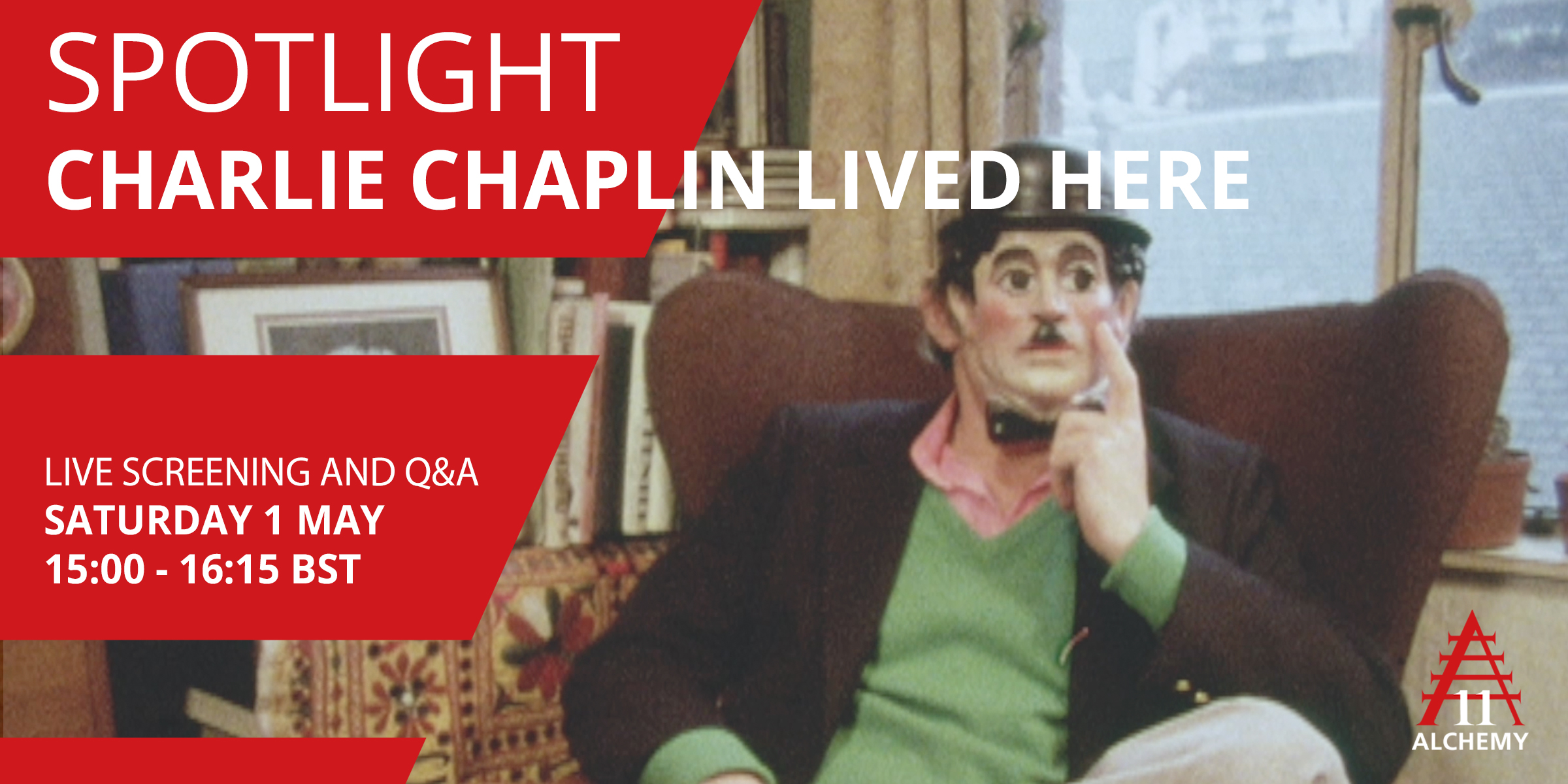 AUDIO DESCRIPTION
This film is also available on-demand 29 April – 3 May with audio description for blind and partially sighted audiences.

London, 1969. Two events are occurring simultaneously. Charlie Chaplin has returned to visit some of his old haunts incognito, while Scottish filmmaker Bill Douglas and lifelong friend Peter Jewell are shooting an amateur movie about Chaplin’s childhood home and early years. The parallels that expand, web-like, from this synchronicity are the focus of Charlie Chaplin Lived Here, a film that hints at a connection between Chaplin and Douglas due half to artistic inspiration, and half to cosmic coincidence.

Louise Milne and Seán Martin‘s combined efforts have produced a work which is at once illuminating and ambiguous, calling attention to Douglas’ lifelong obsession with this most renowned of film stars without offering too many neat conclusions. The film itself is made up of scraps of ephemera; archive footage, readings from Chaplin’s autobiography, items from Douglas’ own extensive collection relating to the star. Perhaps the most intriguing interpretation of these is a recreation of Douglas and Jewell’s film made by Milne and Martin. It forms an echo of an echo, calling into question the nature of artistic reverence.

In Charlie Chaplin Lived Here, time seems to double and refract, and we witness the inevitable modernisation of London – which does not pause even for its most venerated citizens. The film is haunted by a repeated image of 3 Pownall Terrace, one of the houses in which Chaplin spent the majority of his early years, taken prior to its demolition: a chalk graffito, from which the film takes its title, is scrawled on its walls. The past is documented even as it is in the process of being erased. Images question what has been preserved; the significance always complicated by the layering of narratives.

Reflected in the mirror of this shared record lies Chaplin and Douglas’ experiences of childhood poverty and maternal mental illness, presences in both artists’ creative careers, and a common factor which exposes the narrow margin between tragedy and comedy. It is through the lens of each filmmaker that a greater understanding of the other’s character and work can be found, the surprising kinship between poetic realism and surreal slapstick revealed. The two artists never met, their closest encounter occurring at the 1972 Venice Film Festival, as Douglas received the Silver Lion for My Childhood – the first film in what became his ‘Bill Douglas Trilogy’ – while Chaplin was being honoured with the Golden Lion for his lifetime achievements.

What does emerge above the tangled web of coincidences is Milne and Martin’s evident desire to better understand Douglas, through his hero and through retracing the past. There is an affection for him obvious in a close reading of his work which teases out new associations tracing back into both his and Chaplin’s early lives. The film offers insights into the relationship between these mythic figures and the essence of what it means to admire an artist, addressing the nuanced issue of how much of their nature can ever really be understood through their work. Multi-layered, intriguing and observant, Charlie Chaplin Lived Here lays out pieces of the puzzle, from which it is up to us to make a picture.