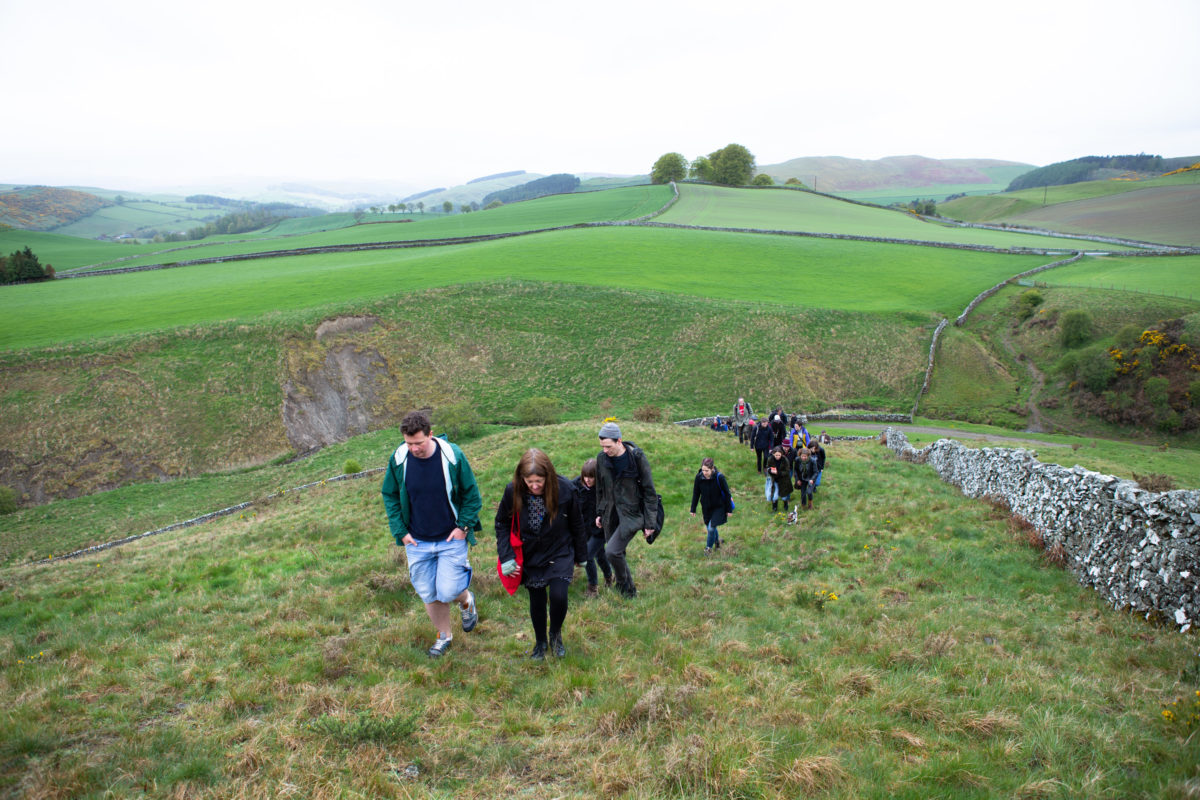 The ninth edition of Alchemy Film and Moving Image Festival culminated on Monday 6 May 2019 with a Film Walk to Hawick’s Wilton Dean Village Hall, where writer, actor and director Gerda Stevenson delivered a new poem, commissioned by Alchemy Film & Arts, in tribute to Margaret Tait‘s 1956 film Orquil Burn. Whereas the film traces an Orcadian burn from sea to source, Gerda’s literary response follows it in the opposite direction: two readings, one before the film and one after, gave a symmetry in parallel to the circular walk.

Margaret Tait directed Gerda in Blue Black Permanent (1992), the director’s only feature film and the first ever made by a Scottish woman. Gerda also attended this year’s festival to deliver Quiet Defiance, her talk on Tait’s legacy, on Sunday 5 May.

Alchemy’s Film Walk was the first event be held in the Scottish Borders as part of Margaret Tait 100, the ongoing celebration of Tait on the occasion of her centenary.

Orquil Burn
(after a film by Margaret Tait)

I rise in a quiet place, tranquil, like my name,
where the lone owl swoops above constellations
of bog cotton and sphagnum moss; water drips
from roots, and I trickle by gravity’s instinct,
meander through abandoned peat banks
to curlew’s call, past orchids and butterwort,
no thought of my own utility;

till I’m commandeered –
diverted to power a mill,
a handy back-up plan
when the wind blows herself out,
and for a while Orkney lies still.
I’m bridged, dammed and fenced –
barbed wire marks men’s borders;
even my name is implicated:
‘liquor’ lurks in its letters
as I’m piped to the distillery.
I learn to flow the man-made way
in straight lines, by Caldale Camp,
its concrete wartime hearths
bereft of walls in desolate ranks,
declaring dereliction to the sky;

But flowers still come to soften my banks,
yellow mimulus and meadow sweet,
and boys gather round me to play
in the ‘deep places’, they say, deft fingers
weaving iris-leaf boats – green vessels gliding slow,
stalking each other to childish cries of ‘Torpedo!’ –
echo of battles a stone’s throw from my estuary,
where I plunge over rocks into the tidal to and fro,
and mingle among history’s wreckage
in salty Scapa Flow.