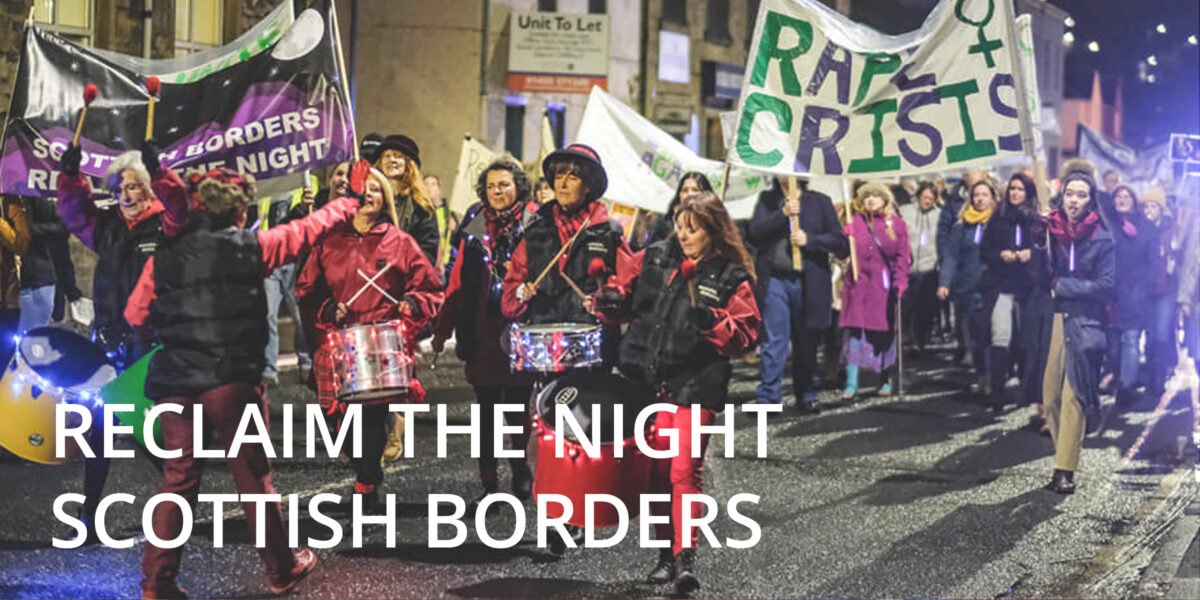 Scottish Borders Rape Crisis Centre (SBRCC) annually organises Scottish Borders Reclaim the Night marches across Borders towns as part of a wider 16 Days of Activism campaign, with hundreds of supporters stepping out to raise awareness of violence against women and show a united force alongside the local community, promoting an inclusive and safe environment for everyone.

This year, while we cannot march alongside each other in person, SBRCC is making a film to mark the significance of the event to our communities and to encourage reflection on the importance of Reclaim the Night.

SBRCC is inviting individuals across the Borders to respond to the question, ‘Do you think it’s important to have a Reclaim the Night march in the Borders?’, in one or two sentences and submit their answers by video message towards the creation of this Scottish Borders Reclaim the Night film. The deadline for responses is Tuesday 1 December – read on to find out how to submit a film.

HOW TO SUBMIT A FILMED RESPONSE

Alternatively, if you have pre-recorded a video file of your response on a camera, phone or laptop, you can follow the same link: SUBMIT RESPONSE. Select ‘add files’, go to your files folders, and select your chosen file. Fill in your name and email address and select ‘Upload’.

If you have any problems with filming or file transfer, please contact Rachael at rachael@alchemyfilmandarts.org.uk for support and assistance.

SCOTTISH BORDERS RAPE CRISIS CENTRE
SBRCC provides emotional and practical support, information and advocacy to self-identifying females aged 18+ and to young survivors of any gender/gender identity aged between 12-18. They support survivors who have experienced any form of sexual violence at any time in their lives. They also support survivors’ families and friends and the wider community in the Scottish Borders so that all can live free from the causes and consequences of sexual violence. SBRCC works ethically, and with others, to challenge and prevent rape and sexual violence. Their services aim to empower survivors to reclaim control of their lives. They support self-identifying female survivors and young survivors, irrespective of religion, race, sexual orientation or disability.

16 DAYS OF ACTIVISM/RECLAIM THE NIGHT
The 16 Days are an international campaign that runs from 25 Nov, International Day for the Elimination of Violence against Women and girls, to 10 Dec, Human Rights Day. The annual, Reclaim the Night march in the Scottish Borders forms part of local 16 days of activism events. Reclaim the Night, established in the 1970s, involves national marches against sexual violence, for gender equality and to demand justice for rape survivors.