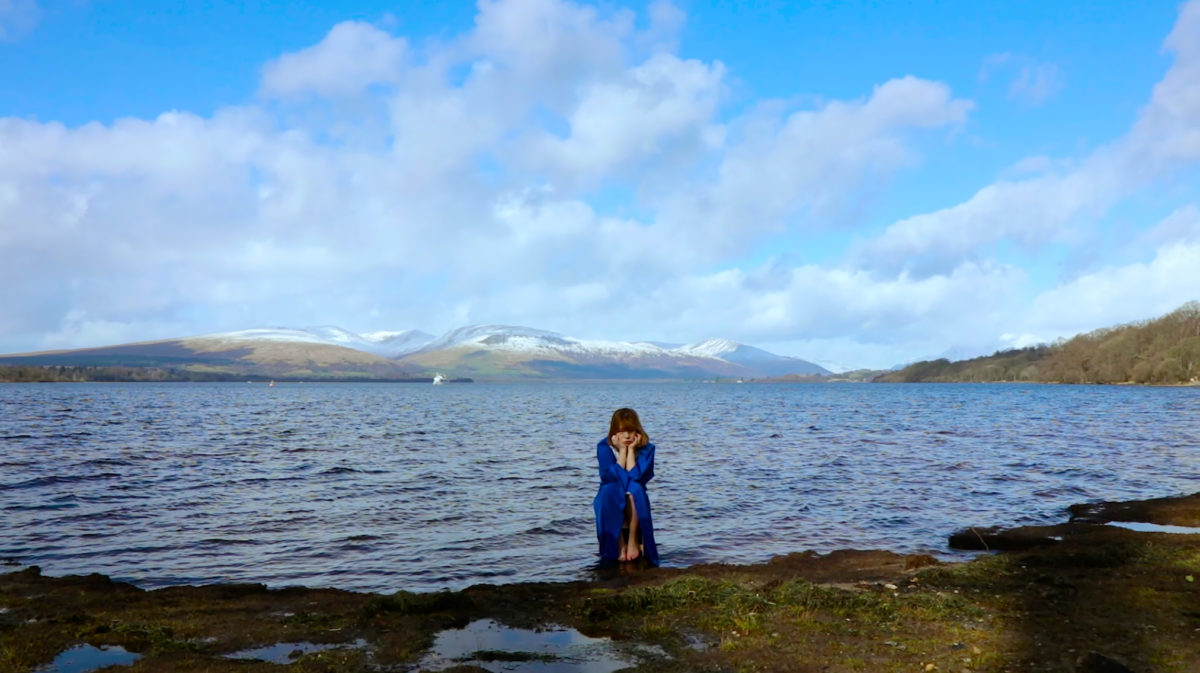 Sitdown is an Alchemy Film & Arts series of artist interviews, published to complement its exhibitions, residencies and other events.

South Korean artist Darae Baek‘s Language makes me an uncertain person is the final iteration of Forage/Image, Alchemy’s project exploring the relationship between artists, landscapes and environment. The film, a two-channel interactive installation, investigates identity, language and landscape and shows in Hawick 15 – 28 February 2020.

Darae’s contribution to Read More, Alchemy’s ongoing project encouraging additional engagement with its exhibitions and other events, can be found here. The artist spoke with Michael Pattison, Alchemy Film & Arts Director, about chairs, language and the Scottish landscape.

Alchemy: Your film makes striking use of the Scottish landscape. What was it about this particular landscape that appealed to you?

Darae Baek: I’m a city girl, but when I make work I like to be isolated. I decided to shoot some landscapes in Scotland. One scene should be with sea, and one with land, without water. I thought I would shoot with water to reflect my origins, my identity, in South Korea. Then I wanted to shoot some very different, very beautiful landscape with no water. My hair colour is similar to the land but the colour of the curtain is not part of the landscape. The colour is most important when I choose the location and make a plan to shoot. In Scotland, because I was staying there, I wanted to find a place with similar colour to me.

It was beautiful already, but the landscape looked different to my eyes and through my lens. When I watched it on my laptop, I thought, ‘Oh, there’s not enough colour.’ This colour is more like the original colour.

This work has a single chair, placed in front of two screens, and when someone sits on it the act of doing so causes the images on one of the screens to change. How else is the chair different to a cinema seat?

In the cinema, it’s not easy to leave, except for the toilet. Everyone is sitting very close and watching one screen. The exhibition seat is more of a choice. The audience can make a decision to sit or stand. There’s less pressure to stay. It’s quite sad to say but in a film exhibition space I don’t see many people watching from beginning to end. Many people watch some part and leave. It’s very difficult to make them stay for the whole video. I feel that when they make a decision to sit, there’s more potential for them to watch it as if at home. I want to give the audience another choice. I want to make them a part of the film. Because their action changes the screen. It’s about choice.

The interactive setup draws attention to the uncertainties of spectatorship. How did you approach the theme of uncertainty?

When I started speaking English, I thought I was losing my Korean language. My Korean was 10 [out of 10], and my English was 3. Now, my Korean is 6 and my English has become 4! Sometimes I just can’t explain how I feel in any language. I don’t express what I’m feeling. But I can express some emotion in Korean words, and I get the same when I speak to international friends – I want to use a Korean word to express an emotion.

I feel like I have a wider vocabulary, but at the same time I have become an uncertain person. Or because of the wider vocabulary I divide the emotions more, to put each emotion to a word. My video talks about this uncertainty. I constructed the visual, audio, sound, voice, language, and put them all together, but I made each one differently. When it’s seen as one work it talks about uncertainty, but I use lots of different things to talk about it. There is no one word to talk about what I want.

You decide to have Korean voiceover, which is not translated, but you also have English text without voice.

When I speak, when I write, and when I hear and watch the film, it seems separate from me already. I speak sentences in Korean but put the word in English. Other people see the word and they feel differently [to me], because they all have a different memory because of the word. I decided to speak in Korean because I’m Korean and I want to say something about my emotions.

How did you approach the soundtrack?

I composed the sound at the same time as the shooting. I usually write a simple keyword that I want to express an emotion. I decide that the sound of an instrument – piano, trumpet – sounds similar to how I feel, and then I try to make that sound into a basic rhythm. Then I go to shoot, then I look at the keyword again, step by step. The most important thing is usually the keyword. I also make a note of how long the sound should be, and that it’s matched with the visual as well as how I feel. The sound is the most dramatic thing in my work, it carries the emotion of what I want to exactly say. The visuals are very still, and my speaking doesn’t give away too much emotion, but the sound is where I put most of the emotion that I want to say. It also opens things, because I feel like if I made a sound because I’m sad, others might think it’s just peaceful. It’s kind of direct, but also not direct.

It communicates many things but it’s not clear what those things are. It’s a language.

If you made the work again, now, how different would the Korean sentences and the English words be?

The position between Korean and English can be changed. I was Korean, I’m still Korean, but the landscape has totally changed. I’m the same person, but I’m also a different person. I’m not sure where my language is now. It can be different, but very much the same. The music would be different.

Something still dramatic, but maybe happier. I was quite gloomy when I shot it. I was shooting in cold water. And now in Korea I’m with family. My location makes something different. But the language, uncertainty, can be similar.

Your exhibition is the final iteration of Forage/Image, exploring the relationship between artists, landscapes and environment. What do these themes mean to you?

It’s the question I always think about. Environment, location, they’re important in my work. I didn’t think about them much until I lived in a different country, when I realised I am a person who is very changeable. I thought I was a calm and stable person, that nothing could change me, but when I started to live in the UK I formed a different identity – things I never thought about before.

I like to find out different things about my identity in different locations. Finding things out about my character is challenging for me. And I think it’s quite important in my artistic career. I want to make art that is more open to people. I want to welcome people to be in the gallery, I want people to [be able to] watch artistic work – travelling and seeing different people and societies, and how different attitudes in the world exist.

Image: Language makes me an uncertain person by Darae Baek