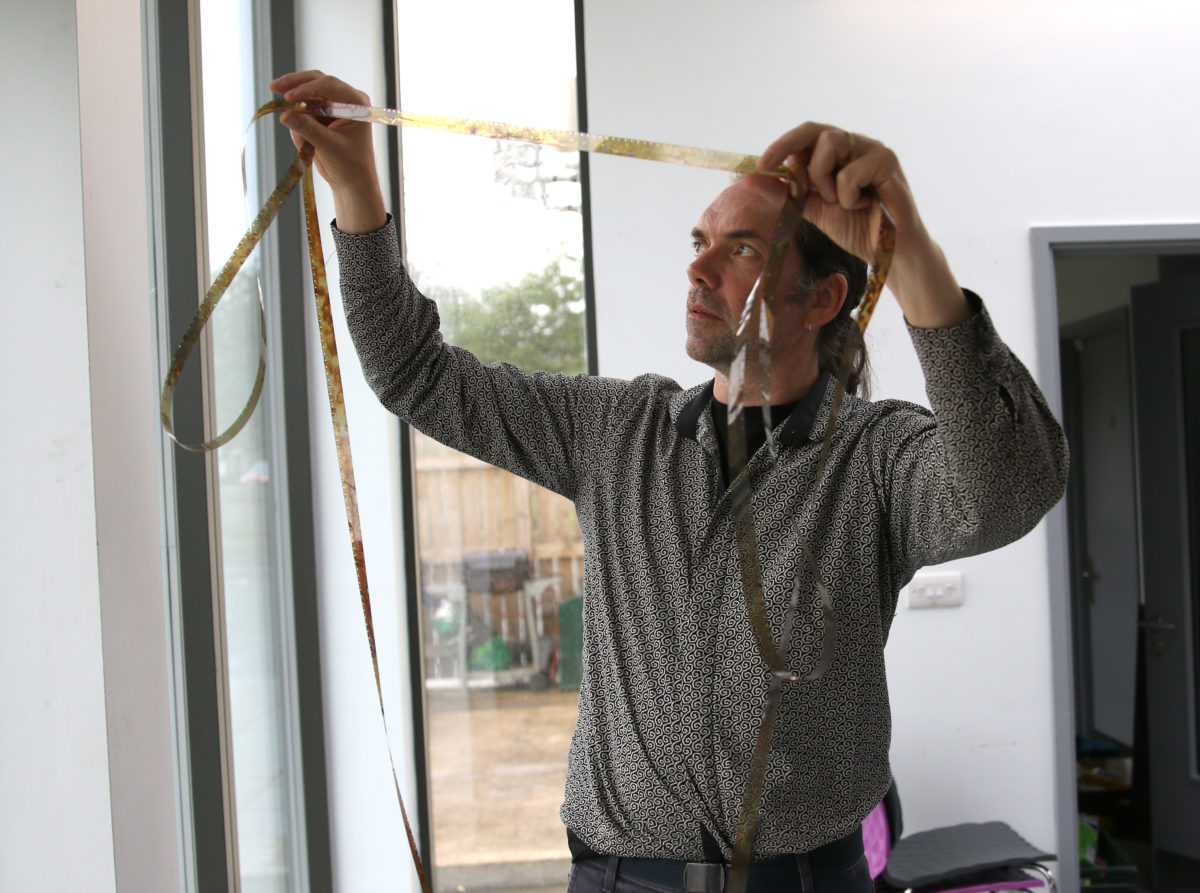 Sitdown is a new Alchemy Film & Arts series of artist interviews, published to complement upcoming exhibitions and other events.

Karel Doing was artist in residence with Alchemy Film & Arts in August 2019. During his residency, Karel created Bog Myrtle and Flamethrowers, a new film exhibition resulting from his plant-based phytogram process, which he shared during several workshops with the Scottish Borders-based Moving Image Makers Collective and staff and volunteers at Burnfoot Grows Together, Hawick’s Climate Challenge-funded community garden.

Karel’s contribution to Read More, Alchemy’s ongoing project encouraging additional engagement with its exhibitions and other events, can be found here. During his residency, Karel spoke with Michael Pattison, Alchemy Film & Arts Creative Director, about working with the plants and people of Hawick, the collaborative nature of his practice and the importance of repetition and duration to his work.

Alchemy: The workshops you led during your residency were part of Film Town, Alchemy’s new community filmmaking initiative. What was it like working with Burnfoot Community Hub?

Karel Doing: That building is quite new. It’s spic and span. I also quite like abandoned sites like the exhibition space, where you’re free to mess around – whereas the Community Hub feels much more organised. The garden is a great feature. I have a personal interest in gardens and connections with nature. A garden is never sterile, even if it is very well organised.

What particular things, from your perspective as the artist, were successful about the workshops?

There was a beautiful moment, when a woman was working on a phytograph and constantly saying stuff like, ‘No, I’m doing it completely wrong,’ or, ‘Oh no, this is not going to be anything.’ She was also comparing herself in a negative way to what others were doing. She was from the local Community Hub, a volunteer in the garden. I tried to encourage her and say, ‘No, it’s fine.’ Then she took the next step, and she could really see what she had done. She was surprised by her own results, and said, ‘Oh, this actually looks really good.’ She said she has a really low self-esteem. ‘This was really nice because it showed me that I can do this.’ This was a really beautiful moment.

Your practice is about collaboration, and about sharing the artistic means of production. Why is that important to you as an artist?

I didn’t theorise this to begin with, but this was how I started making things as an artist. You’re supposed to develop a career, and then you run into all of these things and see that the world doesn’t function like that. As an individual, you are almost a brand nowadays. Branding is very important. It’s less important what you make than what kind of brand you have. I really don’t like that, not only theoretically but it also does not give me pleasure. For me it also has to be fun. It’s much more interesting to share things and get excited about them.

I also like the process of making things more than having the finished artwork and having to sell it. I’m not totally against that – I often sell a piece of work, and I would love to sell to, say, the Museum of Modern Art, I wouldn’t say no! – but if the main idea is to sell the work, it frustrates me enormously. I want to work on the process of making it. It’s much more fun.

Of course, to be completely honest, [sharing the phytogram method] has sort of become my brand. It’s a practice that people can share, and I use that as well because there are people out there who say, ‘Hey, that looks interesting, I want to do that,’ and things fall into place. This is a kind of alternative branding, let’s say.

About the title. Why Bog Myrtle and Flamethrowers?

I started to look at plants in Scotland and came across bog myrtle and flame flowers. I accidentally changed it to flamethrowers. My wife said, ‘Oh that’s really beautiful.’ I thought now because of the barrage of news about the rainforests, it suddenly acquires another layer, and that maybe I can actually somehow use this novel meaning that presents itself.

The work itself is going to be exhibited in Hawick, and it was made in Hawick, by Hawick and let’s say for Hawick, and for people visiting it. I like what you’ve said about being stimulated by the idea of a work that cannot be reproduced easily. It’s going to be here and stay here, in a way.

My PhD was in media and ecology, which is a broad subject. I had big ideals. There was this one tutor who said, ‘Oh, you’re not going to change the world. In the end your contribution is one sentence, and that might be enough.’ I used to think, ‘What is this man talking about? I’m going to do much more than that.’ But in the end, I think my one sentence is that if we want to think in an environmental way, it’s about things that are perishable, and that this is something to be desired, not stopped.

That’s exactly what we need. It has to be born, it has to live, flourish and then die. The moment that it doesn’t die is the moment we have a big problem. I think that’s also true of artworks. If these things can all work together, it’s a privileged moment between you and the artwork. If you know that it is going to disappear, maybe it makes it even more interesting than if you think that in a thousand years it’s still going to be there.

It reminds me a bit of the impulse to film a gig. The process of creating the memory prevents you from having a more visceral experience of the art.

Absolutely. There is something that is much more widespread these days. You have concerts or bands to ask their audience to hand in their smartphones, not so much because they don’t want to be on social media, but because they want their audience to be there during the gig, enjoying the moment of being together.

In your workshops you talked about plants being static things that allow for contemplation. We don’t really see plants grow – we can capture their growth through timelapse and so on, but we don’t actually watch them grow. And then, seeing workshop participants placing plants directly onto film strips, it occurred to me that they are creating duration. The plants become documents of time.

I have worked for such a long time with 16mm and 35mm, so the moment I see individual frames I can translate them into movement and what happens during projection. I try to say things like this in my introduction, and sometimes interfere with it a little bit and give workshop participants some suggestions in terms of what could be the results. But because a lot of people are so new to this, they are also removed from translating what is on the table to what could be onscreen. Maybe I don’t have to explain this. Maybe the fact that it is a surprise is one of the most interesting things about it.

You say that you try to guide the image but also that you have to leave it at certain point. There’s hazard, chance and contingency on the one hand, and guidance and structure on the other.

Maybe it’s another good reason to take it out of my hands. The longer I do this the more I know, the more I can control it, and then it gets less interesting. I worked quite a bit with improvisers in music and they understand this very well. They can even be militant in thinking this is the only way [to work]. I worked with Steven Beresford, for example, and he refuses to do any type of rehearsal, not even five minutes before the concert.

Another interplay in your work is between repetition and duration, and the combination of those having some kind of impact on perception. Which is incredibly important in the context of a looped film projection, and the idea you’ve spoken of regarding the loop never repeating itself.

There are so many things to say about that. I started as a musician and a painter and then moved into filmmaking. There’s a natural progression, because music is also about repetition and variation. In that sense it feels very natural and logical – without theory, something that is experiential. Deleuze talks about this. We think of repetition as something that humans make. We build architecture, for example, we build a colonnade, and then something repeats itself and is very regular. But when we walk through the forest we have the same thing. Trees repeat themselves but they are also always different. And even us, as human beings. We are also repetitions of the same thing, but we perceive ourselves as individuals, so there is this strange kind of contradiction. We have the same genetic code. If you put both of us together, you would have to be a real good geneticist to point out where the differences are. The two of us sitting together are a repetition of something. This is a beautiful realisation, this tension between individual and collective. Or, if you wish, repetition.

Your practice highlights this. It creates a framework in which that relationship is emphasised.

I hope it does at different levels. If people want to think about it in a very reflexive way then that might be possible. And also, on a much more instinctive level, where people can’t put it into words but somehow it speaks to them.