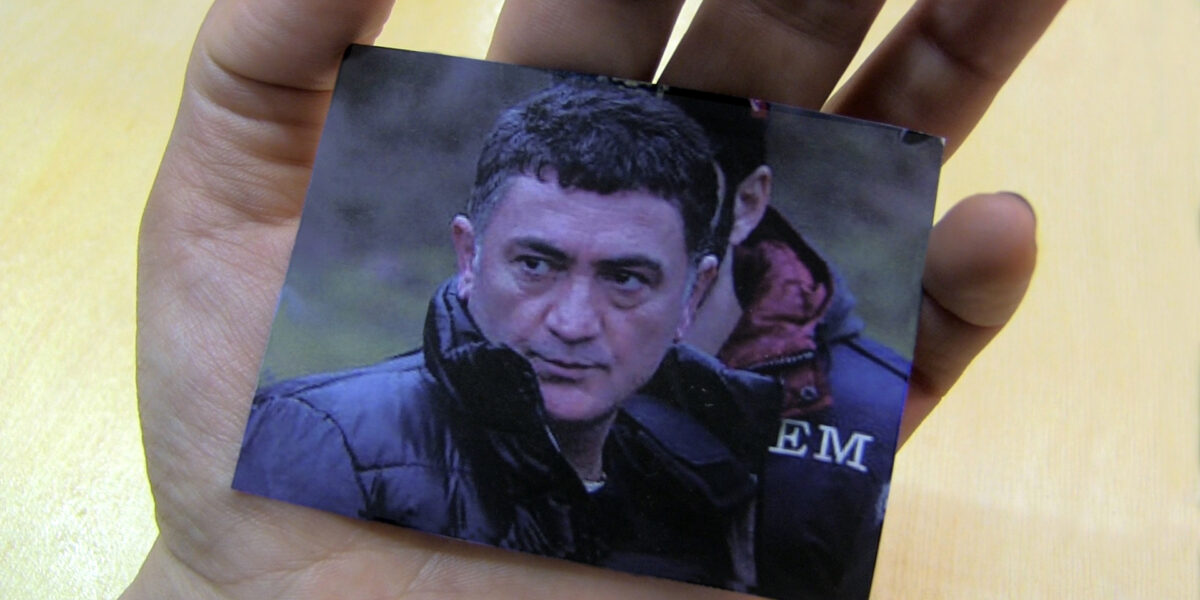 The following text was written as part of of the Writing Workshops that Alchemy Film & Arts ran, January – May 2021, in partnership with LUX Scotland and The Skinny. The Writing Workshops, delivered to eight early-career writers based in Scotland, were designed to broaden and deepen participants’ understanding of experimental film and artists’ moving image within a range of critical contexts.

“What is the role, what is the function of the image?” belit sağ describes this question as one that sustains, or perhaps incites, her practice. The same question struck me during a retrospective of the video and visual artist’s work at Alchemy Film and Moving Image Festival online in April 2021. sağ has been working with images for decades; her roots are in video activist groups in her home country of Turkey. In the 1990s and early 2000s, she co-initiated projects such as VideA, Karahaber and bak.ma. Alchemy’s programme of sağ’s work – curated by Almudena Escobar López – was characterised by not only its vitality and endurance, but also its urgency. sağ’s work reckons with images of violence and the violence of image-making. It asks how we can make sense of, and perhaps even find spaces for activism in, our current violent and image-based world.

sağ speaks to me from her studio in Amsterdam. We talk immediately about the thread that runs throughout her work: the affirmation that violence does not happen separate from image-making. “Images are an extension of the violence that is practiced on certain communities,” she says. “At least in Turkey and the communities I’m talking about in the videos I’ve made.” sağ’s work about Turkey does indeed assert that these political conflicts are so often inexorably linked to images. In her video Ayhan and me (2015), sağ holds up a photograph of Ayhan Çarkın, a member of the Special Operations police in Turkey who claimed to have killed thousands of Kurdish people as part of an underground military wing of the state. In the video, sağ continuously places her hand over the image in a gesture of ‘now you see it, now you don’t.’ In voice over, she muses on this peek-a-boo routine: “a little like how history is written, I guess.”

sağ also emphasises the very literal role that images can play in violence. “Why would you document and distribute someone’s torture? Or that body taken into the streets? There is a certain way of remembering that it creates. Once you think about this person, that becomes the first image in the memory. It also gives a message to the larger community that the person is part of, saying: ‘if you do that, this is how you’ll end up. If you speak up, if you say anything, that’s what will happen to you.’ It’s a scare tactic… not just that, it’s a threat. It no longer only happened to that person, it’s now a threat to the whole community.”

What do we do with images of violence? What can be done with them? sağ’s practice utilises these images for different means. She describes how she approaches these images, which she emphasises comes from her a need to find an “inevitably small, and inevitably subjective” way into these huge issues. She often emphasises the personal encounter with the image in her work, which informs the re-appropriation of the image. “What I’m doing is constantly contextualising images, taking them out of their context and then questioning that context, because that context is also created. It could be images that were produced at the same time, or images with 30 years between them, but certain things repeat, and certain types of images are used in that repetition. I’m trying to understand this relationship, what kind of repetitions happen?”

Questioning the order, the context and the repetition of images is a potent tactic in sağ’s work. In her 2018 video cut-out, she presents the police file photos of the Nationalist Socialist Underground’s victims: ten people, mostly of Turkish and Kurdish backgrounds, who were killed by the far-right terrorist organisation in Germany between 2000 and 2007. Already, the institutional context weighs heavy: the police treated these cases like individual assaults, ignoring the pattern of terrorism behind these targeted murders. sağ takes each photograph individually, speculating on the circumstances of each — did the person choose their photo’s background, was it taken at a photo studio, or cut out from a holiday snapshot? She then questions their arrangement, noting that the tenth victim appears fifth in this version of the file photo. In voiceover, sağ asks, ““Was she supposed to be killed or remembered earlier?” By disrupting the context of these images, sağ exposes it, and reminds us that our encounters with images are so often already determined by political parameters.

The nature of image creation and image distribution has changed so much during sağ’s time as an activist and artist. She reflects on these changes, recounting the 2013 Gezi uprising: “In the ’90s and 2000s, we had to invest in cameras, and if there was a demonstration, groups would call us or we’d show up and record it. In 2013, there was no such need, because everyone had their phones. There was no need for a ‘video activist.’”

It was around this time that sağ collectively started bak.ma, an audiovisual archive of protest movements in Turkey. The activist onus became less about creating images, and more about collecting them. However, the archive did not only capture these waves of new phone-based images, but also uncovered images from Turkey’s past.  “There are images from 1 May 1977 [the Taksim Square massacre] in that archive now,” sağ says. “It’s crazy because none of us were directly there at that time, but you start collecting and suddenly discover all these video activists that didn’t call themselves video activists – the whole lineage starts appearing.”

Certain concerns have remained constant for sağ in her activist practice: she emphasises that this kind of image work is always “an active way of fighting,” especially as “the mainstream creates a certain practice, and that becomes the practice, the way to read images, the way to engage with them. So, what is another way? What is the other way?”

You can see this dynamic of mainstream versus alternative images in effect in her video and the image gazes back (2014). The video utilises images that reimagine the real (1975’s Dog Day Afternoon compared with footage from John Stanley Wojitowicz’s actual 1972 bank robbery) and realities that seem like fiction (the 1981 coup d’état attempt of the Spanish government, which sağ in voice over rightfully observes looks more like a scene from the Pink Panther than a defining moment in the history of Spain). Near the end of the video, sağ reflects on the comparison between the ISIS-distributed beheading video of journalist James Foley and the 1995 Hollywood film Seven. She asks, “How many ways are there to execute someone in the world of images available to us?”

It’s a question revealing the imperative that we remain engaged with, and literate about, images. It’s not only that images inform each other, or that reality and fiction bleed, but also that we must practice reading the images surrounding us. We’re in a situation where the pace of image production and distribution is faster than ever, presented to us primarily by algorithm as part of vast networked capitalist structures. How do we resist becoming simply overpowered?

In our conversation, sağ points out the importance of “finding practices where one can still engage with images, and not become overwhelmed or feel powerless against them. There’s no space for us in these images we come across online and in all the ways they are distributed, how they end up in our timelines. It can create a practice of passivity but also of being overwhelmed. One needs to take breaks and protect themselves, but there is also a need to be an active part of it all, not just exposed to it. A question in my work is how to create ways of doing so, that’s what I am trying to do with my practice.”

Alchemy’s belit sağ retrospective was a testament to how, throughout ever shifting political and technological circumstances, sağ has always carved out her own practice. Her work serves as both interrogation and response to the question of how violence happens through and with images. In conversation, sağ reflected on what sustains her practice: “I have a very close relationship with images through my work— I’m talking about them and critiquing how they are used, but sometimes I feel it is useless to do it only through the use of images. I feel at this point I want to create spaces, stories, narratives and continue to focus on construction and never reaction. I ask myself, what are the ways that I want to work with images? What are the ways I want to create these stories, what is the practice I’m interested in, or admire, or want to explore?

”You keep trying to get close and then suddenly that is the practice, trying in a multiplicity of ways to get close, defining multiple proximities and distances, and that becomes the practice. That’s something that I find valuable, and I strive to practice in this way.”