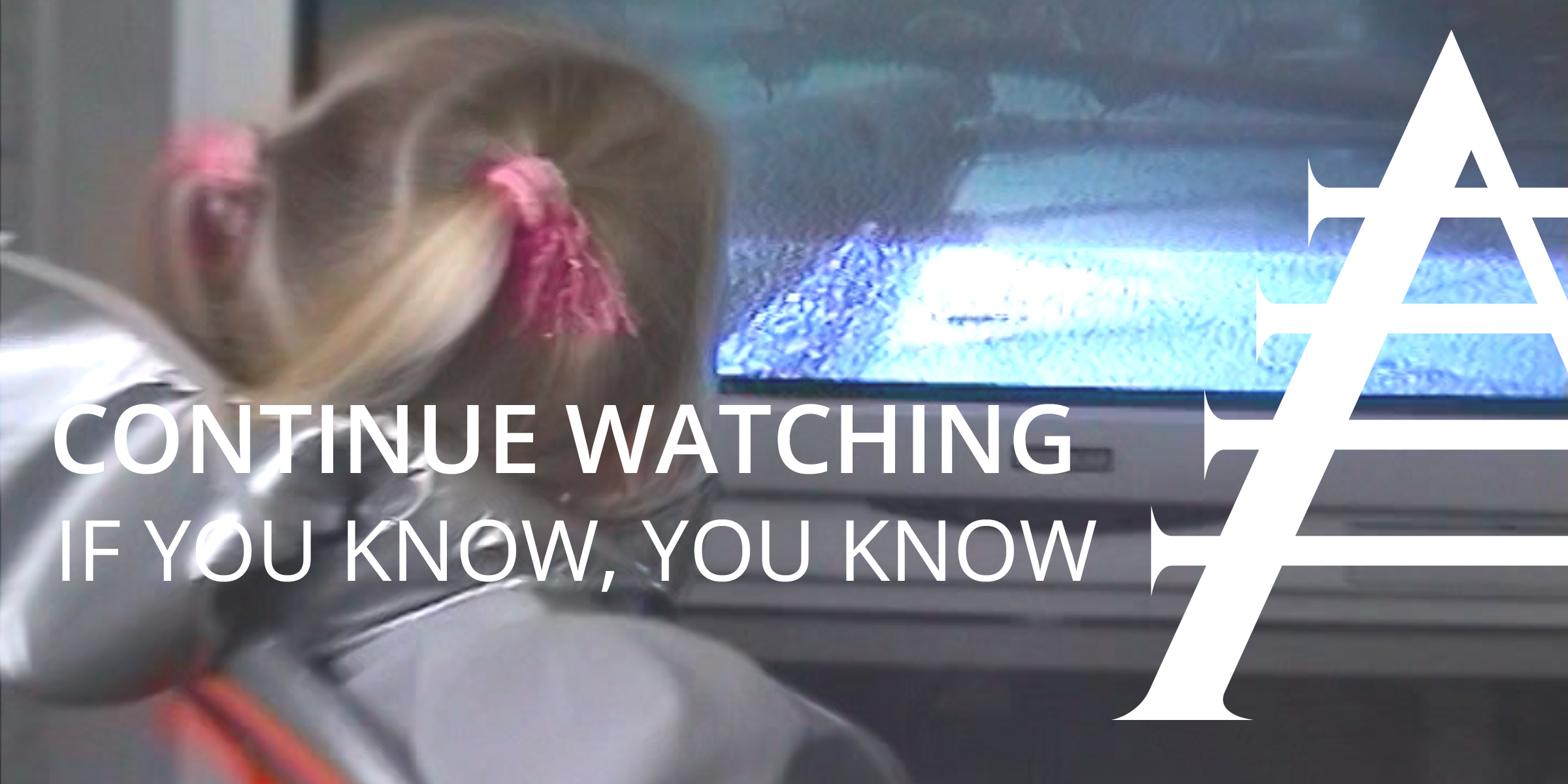 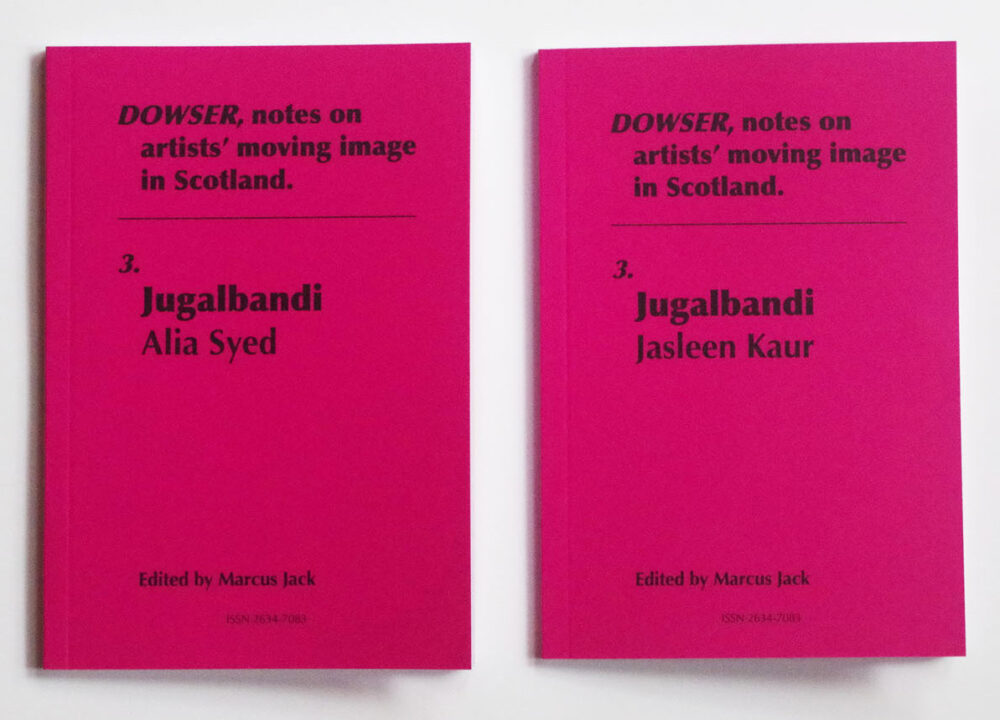 Shorts programme curated by Marcus Jack | Captions available
To coincide with this screening, Alchemy has supported the publication of a double edition of DOWSER, featuring new writing by artist filmmakers Jasleen Kaur and Alia Syed.

IF YOU KNOW, YOU KNOW
by Marcus Jack

If you know, you know is a screening of artists’ moving image, experimental film and animation made in Scotland between 1970 and 2020. This programme brings together seven works from disparate places, production contexts and moments in history to consider the systems and practices within a community which shape its understanding of who and what constitutes the insider. With a critical relationship to the cinematic mythologies of whiteness, provincialism, romantic wilderness and industrial grit, these works offer a more complex and contradictory impression of moving image from Scotland.

To the limited extent that any film programme of multiple voices can be co-opted by its curator as autobiographic, this selection is an exercise in subjectivity, in articulating the deeply personal. It comprises scenes, streets and rituals of intimate significance to me: heading north and roaming brownfields; civic pride and self-deprecation; game-playing and piss-taking; eightsome reels and happy hardcore; being too Scottish and not being Scottish enough. Who gets to be an insider and what are they inside of?

In Düsseldorf-based filmmaker Lutz Mommartz’s Das Atem des Schafes (The Breath of the Sheep, 1970) we see Scotland as an outsider. Recorded on a trip to the Highlands ahead of his participation in Strategy: Get Arts – a landmark exhibition at Edinburgh College of Art – Mommartz’s 8mm film testifies to the Scottish imaginary that preceded self-representation. Mist-wrapped mountains and a maggot-infested sheep carcass are soundtracked by stretched-out psychedelia, encoding this as a place of wildness.

The travelogue is mobilised again by animator Lesley Keen in Burrellesque (1990), commissioned for Glasgow’s European Capital of Culture 1990 programme. Drifting through Glasgow’s Pollok Park towards the Burrell Collection as seasons shift, Keen’s 35mm film convenes with the spiritual life of the artefacts held therein. These objects break out as kaleidoscopic visions, ripped from their place of origin; escapees pointing to Scotland’s own history of cultural extraction.

Where do we look? Alia Syed’s Points of Departure (2014) is the result of the artist’s ill-fated attempt at finding herself represented in BBC Scotland’s film archive. The work scours archival footage – camera scanning eroded sandstone and pebbledash facias, Glasgow’s failed housing projects, industrial wastelands – searching in vain for absent Scottish Asian bodies and narratives. In doing so, it makes plain the harmful exclusions that memory institutions founded upon systemic inequity can perpetuate.

This searching eye also characterises Margaret Tait’s These Walls (1974). Skimming the interior of her studio on Edinburgh’s Rose Street, Tait’s 16mm film inspects the accumulated debris – shells, scribbles, found photographs – building a self-portrait through this ephemera. Normally exhibited by Tait as a silent work, in this posthumously discovered version with sound a wry-toned voiceover now parodies, ‘I wanna make a picture of the moon and the castle.’ Playing the earnest outsider – a tourist, or a filmmaker – a comically thin line is drawn between an us and a them.

What makes an us? Roddy Buchanan’s Gobstopper (2000), recipient of the inaugural Beck’s Futures prize, is deceptively simple. Children sitting in the back of a van are recorded taking an exaggerated inhale before attempting to hold their breath for the duration that it takes to travel through Glasgow’s Clyde Tunnel. Practice for the tunnel’s hypothetical, watery collapse, the game has entered local folklore as something of a ritual born of the project of post-war regeneration.

The role of game-playing in fostering collective identity is central also to Fair Creature (2006), a video by artist Mandy McIntosh with Christine Gibb and her family. Recorded by the Gibbs in their Saltcoats home over the course of a year, the video lovingly documents water fights, misbehaviour and a lingerie party as social practices which bond a community. Edited collaboratively to a soundtrack of gabber and euphoric reverb, the work hands its authorship over in an offer of self-representation, producing moments of joyful irreverence and poetic abstraction.

The family also forms the subject of Jasleen Kaur’s Ethnoresidue (2020), commissioned by Tramway TV in the wake of COVID-19 and made at home over a few days for online viewing. Rooted in the artist’s experience as part of the Scottish Asian community in Pollokshields, Glasgow, a conversation with the artist’s maternal grandmother is punctured with intermittent family photographs, domestic vignettes and digital ephemera. Kaur’s video articulates belonging as contingent, tied closely to complicity within the enduring project of colonialism.

An hour-long roundtable addressing the historic and contemporary infrastructural contexts for experimental filmmaking and artists’ moving image practice in Scotland. This session will consider the values and limitations of our devolved artists’ film culture; map the resource and support available to artists working in Scotland; and ask what, if anything, makes a work Scottish?

MARCUS JACK
Marcus Jack is a curator and writer based in Glasgow. He is currently undertaking an AHRC-funded PhD at The Glasgow School of Art looking at the history of artists’ moving image in Scotland and is the editor of DOWSER (2020–), a new publication series on the same field. In 2015, Jack founded Transit Arts – an organisation for the exhibition of artists’ moving image – and has developed projects with partners including ATLAS, the Goethe-Institut, Glasgow Film Theatre, Glasgow Short Film Festival and Tyneside Cinema. He was a submissions panellist at Open City Documentary Festival (2019 – 2020) and Glasgow Short Film Festival (2016 – 2020), juried the 2018 TENT Academy Awards (Rotterdam) and recently coordinated the Margaret Tait 100 centenary project.

KITTY ANDERSON
Kitty Anderson is Director of LUX Scotland, an organisation based in Glasgow that supports, develops and promotes artists’ moving image practices across Scotland. She was previously Curator at The Common Guild, Associate Director at The Modern Institute and Associate Curator at Frieze Projects. Kitty is a regular visiting lecturer at Glasgow School of Art, and currently contributes to programme advisory groups for Stills, Edinburgh, and Berwick Visual Arts.

MOIRA JEFFREY
Moira Jeffrey is director of the Scottish Contemporary Art Network, the member-led network that champions and connects Scotland’s contemporary art community. She is a writer with two decades experience in arts journalism and broadcasting, and has had roles in public funding, development work, and strategic projects. Her published works include criticism and commissioned essays on artists including Alice Neel and Monika Sosnowska. Most recently she has written on the painter Janice McNab and contributed to new monographs on artists Carol Rhodes and Jacqueline Donachie and the documentary photographer Alan Dimmick.

MICHAEL PATTISON
Michael Pattison is Co-Director of Alchemy Film & Arts. As a critic he has written commissioned texts on a wide range of films and artists, and has been published by Sight & Sound, the British Film Institute, the Guardian, Tribune, Film Comment, MUBI, Reverse Shot, Playboy and many others. He has devised and tutored workshops for emerging critics at several international film festivals; has delivered keynotes on subjects including the educational value of experimental film and the practices and infrastructures of short film exhibition; and has served on numerous juries and selection panels, including Cove Park’s experimental film and moving image residencies. He is also an AHRC-funded PhD candidate in film practice at Newcastle University.

Title image: Mandy McIntosh with Christine Gibb and her children, Fair Creature, 2004. Courtesy of the artists.