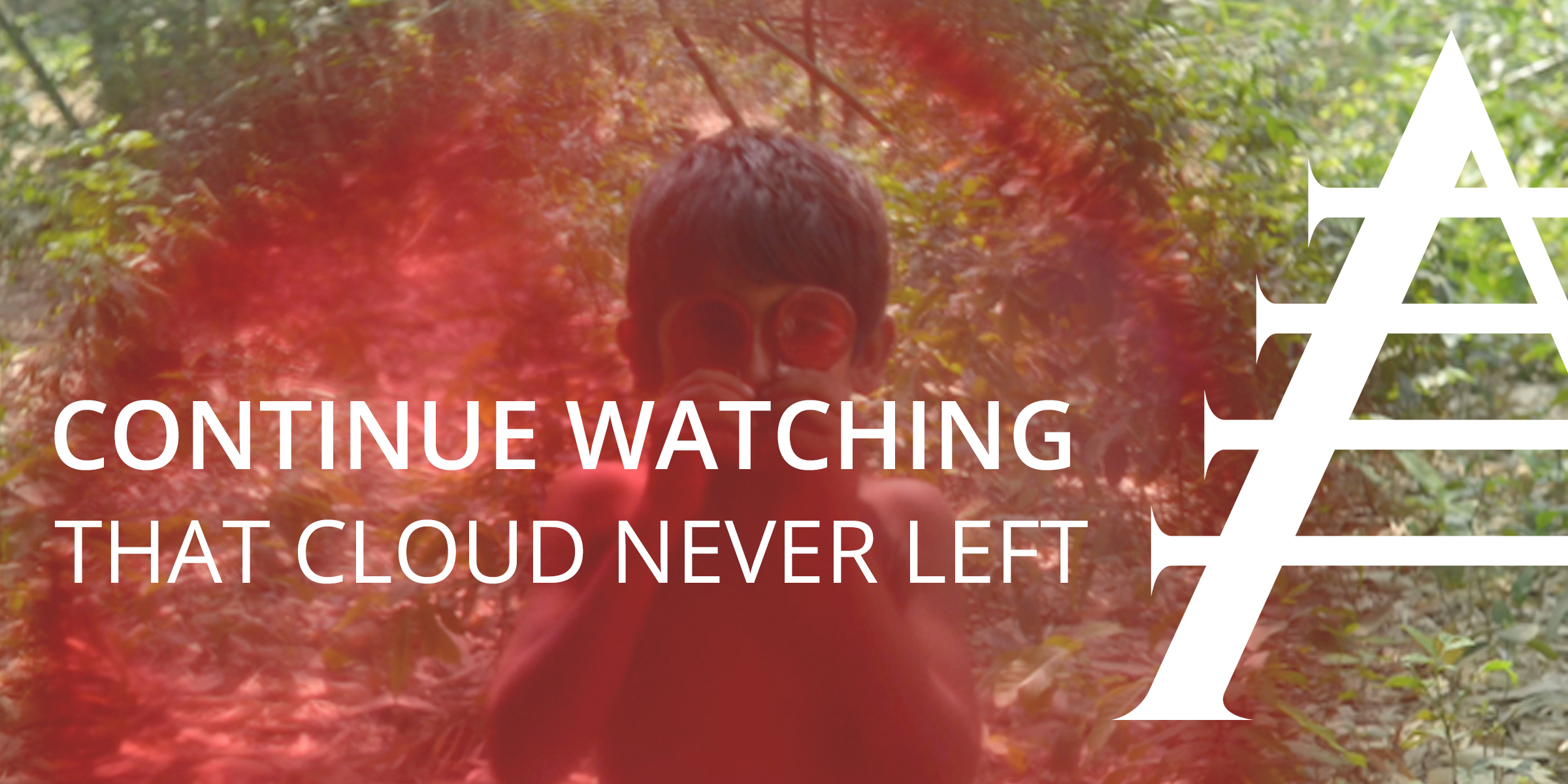 Yashaswini Raghunandan – 65’ – India – 2019
Bengali with English captions
A portrait of a Bengal village where film reels from Bollywood, Tollywood and B-Movies are refashioned into children’s toys.

THROUGH THE KYATKETI
by Jemma Desai

In Daspara, a village 200km outside of Calcutta in India, the history of cinema and the history of labour swirl together inside a kyatketi, a children’s toy handmade by local workers. The kyatketi is comprised of bamboo, hand-bathed in red dye, and contains frames from discarded 35mm reels of Bollywood, Tollywood and B-grade films. Evoking the cinematic history encased in the kyatketi, Yashaswini Raghunandan’s That Cloud Never Left opens with an intertitle:

THIS IS A WORK OF FICTION. ONLY PEOPLE, PLACES AND THE WORK ARE REAL. FOR THE REST, ANY RESEMBLANCE TO ANYTHING THAT MIGHT HAVE ACTUALLY HAPPENED OR DREAMT OF IS PURELY COINCIDENTAL.

A significant, visible, strand of Indian cinema in the 1930s – 1950s was instrumental in developing the cultural identity of India as a nation. Such cinematic ‘self-definition’ paralleled the country’s struggle to rise up against British rule: an act of rebellion.

But which ‘self’ was being defined?

Inside this question lies a struggle present both in Indian cinema and, more broadly (and often more violently), in Indian society at large. Seventy percent of India lives in its rural areas, yet it is almost always the other urban-dwelling 30% that gets to govern, imagine, and film this life, and travel with its image to other places, placing it in front of, and catering to, other gazes.

Raghunandan hints at this struggle as she frames her interest in the rural workers who make the toy. The story she presents, and (re)presents is complicated by her insistence that, despite its appearance, her film is not a documentary, reminding us that any inference to social realism is a fiction from another’s subjective imagination. This opening intertitle invites us to view the film differently, to take on a different spectatorship perhaps, or at least to turn our attention to the labour of assembly, the illusion created by the labour, as well as the vitality of the real lives that film captures.

In the opening moments of That Cloud Never Left, we see a salesman holding a bouquet of toys. The kyatketi is a small insignificance in the context of his huge haul, but its rattling sound is insistent, compelling us to find it in the man’s hand. The sound travels out from inside the toy but it simultaneously pulls us inside. We move with this sound, which click-clacks into the hum of a projector, moving us into a reel of film that begins turning, moving us in a circle, pulling us further inside the red toy, which is now in a boat moving towards its birthplace.

A red filter comes across the screen, like a drop of dye in my eye, and the sound becomes different, more distant, and we hear a man. The man is looking at the kyatketi, thinking about its movements, reflecting on what it tells him about time:

‘Isn’t it funny, this kyatketi spins a hundred times a minute in my hand, while the Earth takes 24 hours to spin just once! Just once! In a whole day! Of course, imagine the size of the Earth. Won’t it take time? You know, when I look through this kyatketi, life looks different, a bit strange.’

Floating through the camera’s red filter, we find ourselves inside the toy, or perhaps we are inside that man’s eye. Later, when we reach the toy’s birthplace, the location it is made, multiple TV screens and radios share news of a once-in-a-century blood red lunar eclipse, as if the intimate, carmine-tinged voyage home, inside the kyatketi, has manifested a precious collective perspective, profound in significance.

Like the manifestation of ‘cinema’ when film is passed from the filmmaker’s eyes through the projector to the viewer’s.

There are many circles, turnings, orbits and spirals in That Cloud Never Left.

As well as the blood red lunar eclipse, there is the single red circle that is mounted on top of the viewing platform that a family makes to watch the eclipse together. There are the many moonlit walks and conversations, arrivals and exits. There are the spherical discs that make up the toys, the circular movements that mix the dye, the careful handling of materials at speed; rhythmic, percussive. These are circles that mirror the repetitive work that labourers must do to make the kyatketi, the circular movement of the film moving through reels, the circularity that leads night into day and day into night.

The meditations on time and labour, and on perspective, remind me of the monotony of time during lockdown, but also two articles I read at the beginning of the pandemic. Author Arundati Roy described the pandemic as a ‘portal’, an opportunity to see something, a way to step into another, different, less broken world. To dare to imagine something different, and demand something better. In another piece, cultural strategist and documentary producer Sonya Childress potently connected this demand to image-making, referring to it as ‘a reckoning’.

In That Cloud Never Left, a young boy peels and cuts onions with a blade, helping his mother in the kitchen. She asks him what he’s going to do if he’s not intending on going to school today. What will he do with his time?

Other young children spend their time searching for a ruby in the fields. A father tells his son to forget the stone and to study, but the young boy persists, determined on pursuing the possibilities of his imagination, following the journeys it might take him on.

A group of boys seem to be about to take flight as they catapult themselves up and down rhythmically on the branches of a mango tree. The children claim the stone is hidden in their friend Tanu’s hair, or that the stone has turned into the moon.

The possibilities of the children’s play, its connections and its manifestations, begin to feel limitless. The search for the ruby, the spending of time in search of a jewel, turns their play into poetry, into liberation.

Raghunandan draws attention to the ways we learn to be productive, the ways we unlearn how to play and let go of our imaginations. The children’s play might include searching for jewels and unearthing poetry, but these gifts are missing when their parents mention school or when we catch glimpses of their cramped classrooms. Play forms spirals, unending, morphing into anything, all powerful and protected with infinite potential for us to enter new realms. The elders’ labour, conversely, seems to bring the workers back to other more constrained circles; unending conversations about money, respite constantly interrupted. The same radios and televisions that offer the lyrical escapism of old Hindi films and songs also bring news of police violence against vulnerable rural workers fighting for their livelihoods against ever circling corporate interests.

Within these circles I make another invisible loop – back to that first intertitle, towards our impulse to the cycle of fiction, our constant fictionalising of each other’s lives, each other’s dreams and intentions.

Sometimes I wonder if I ever will be again. How to yield to the oneiric experience of the cinema when the inequitable conditions in which films come to us, are shown to us, are made and distributed, come clearer and clearer into view? When we begin to see the ways that something is handled and mishandled by the time it reaches our eyes, how can we unsee it?

When I am reading about That Cloud Never Left, I find a review that refers to a quote from Raghunandan, from a screening at Rotterdam Film Festival in 2019, where she describes wanting ‘to make the film feel like a crumpled piece of paper with a wealth of stories inside of it’.

The description, less romantic than a portal, or a phantasmagoria, or a kaleidoscope, evokes for me the concept of jugaad, a Hindi term referring to the acts of creative imagination that play out in places of limited resource. The physical act of handmaking the kyakteki at scale – working the cane, the clay, cutting the plastic, wires, papers and film reels – requires multiple acts of jugaad.

Watching That Cloud Never Left during a pandemic means I watch the film not at a festival, or at a cinema, but at home, on my laptop. Sometimes, during night-time scenes, my fingerprints appear on faces appearing onscreen, or my reflection gets caught in the onscreen moonlight. I appear to myself through the film, make my way in, while the children play. My viewing, my position, my place in it, finds its root in a form of jugaad. It is tempting to find poetry there, in my (mis)placement, my (im)position on the screen.

A friend sends me a talk by Leela Gandhi, a postcolonial theorist. Gandhi describes postcolonial thinking as a form of jugaad, ‘which can refer to a makeshift vehicle of a style of frugal engineering that uses all the limited resources at hand. Pieces may not belong together and will likely disaggregate once the job is done, but their surprising combination is effective (it makes something work) and innovative (it builds something new).’

This description reminds me of the ways cinema can be the site of making new connections, a new image, Roy’s ‘portal’ from one world to the next. But for it to truly be a site of ‘reckoning’, as Childress presses us to demand, it must also grapple with something else, something less concerned with the image we see, and more with the root of the ones we make. In the words of Cameroonian philosopher and political theorist Achille Mbembe, we must ‘take the beast’s skeleton apart, to flush out its favourite places of habitation. More radically … [we must seek to] know what it is to live under the beast’s regime, what kind of life it offers, and what sort of death people die from.’

As I examine the world Raghunandan makes and unmakes in That Cloud Never Left, I make an assemblage of screenshots. Snip them like the film frames the workers snip. Arrange them to make a new, digital ensemble, through which I examine again the contours of the ball of paper that Raghunandan has made. The contours I saw to write this piece seemed to be inviting us to let go of old ways of watching, old ways of sharing that watching. By inviting us inside the kyatketi, itself an assemblage, an apparatus, an ensemble, a jugaad.

So that the possibility of stepping into a new one becomes less a dream, and more an urgent necessity.

YASHASWINI RAGHUNANDAN
Yashaswini Raghunandan (b. 1984, India) is an artist and filmmaker. She received a Post Graduate Diploma at The Social Communications Media Department Sophia in Bombay. She wrote several long and short film scripts before developing a special interest in sound and its narrative potentiality after her graduation at the Royal College of Art in 2015. She is a currently resident at the Rijksakademie in Amsterdam.

JEMMA DESAI
Jemma Desai is a born and bred Londoner whose current practice encompasses research, writing, performance and informally organised settings for deep study. Her most recent body of work is ‘This work isn’t for Us‘.