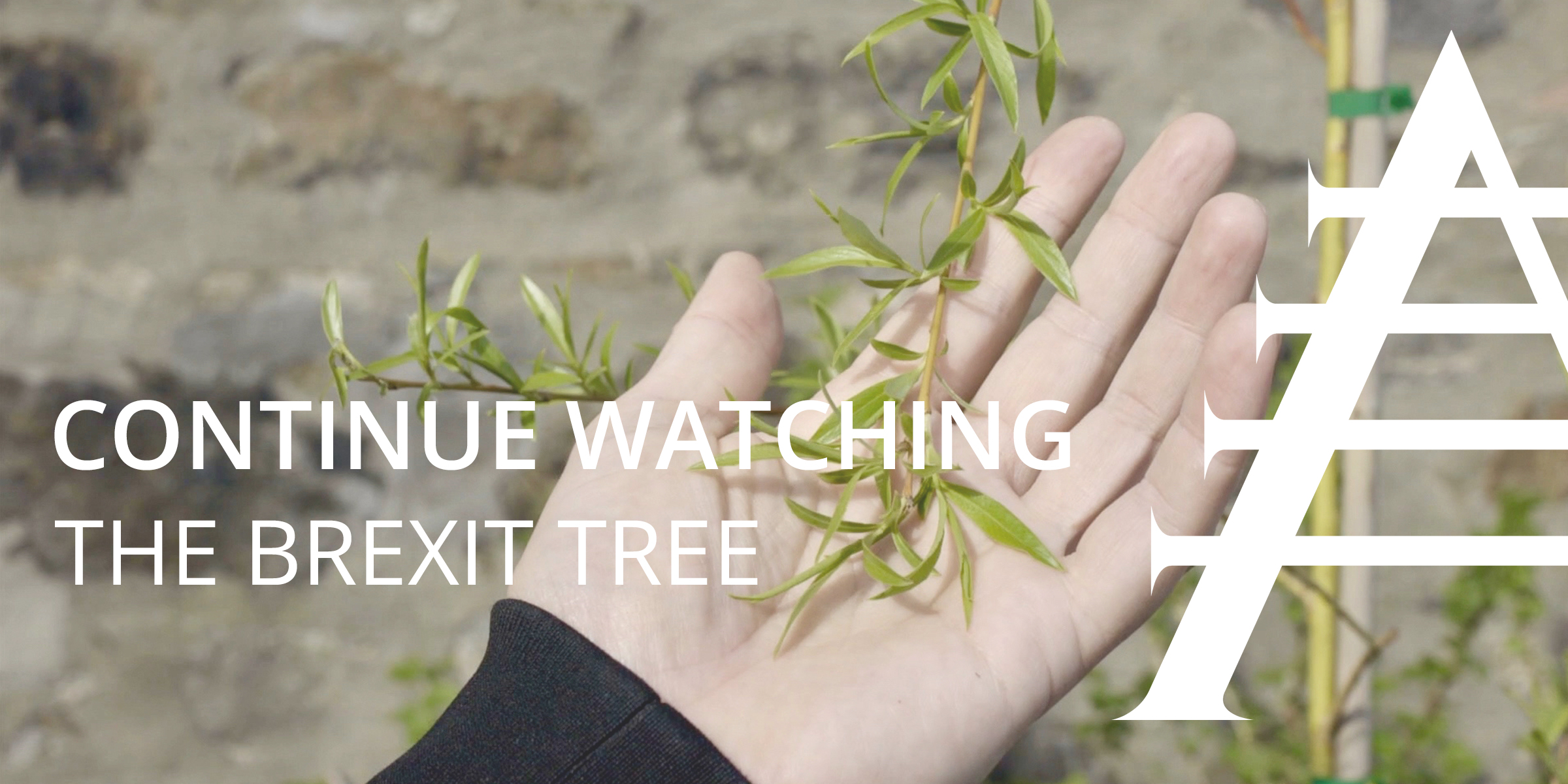 THE B WORD
by Michael Pattison

There is a moment of quiet, retroactive dread in the opening sequence of The Brexit Tree, when the film’s narrator recalls encountering, in a message sent to him in 2018, the eponymous portmanteau: ‘as I was going through the email and came across the word Brexit…’ The images accompanying these words are of urban China, many of them captured from a moving train, and the sequence ends with a drone shot of sheep in a field in Scotland. The voiceover continues: ‘I finished reading the email, and a bit later, in the same year, I found myself sitting on a plane flying from Shanghai to Aberdeen.’

Narrated by Jan Martinec, this opening juxtaposition of images – actual and conjured, recorded and remembered – is persuasively cinematic in its temporal compression. Suggesting a state of mind that is simultaneously fixated with potentialities and prone to absurd, continent-hopping jump-cuts, the voiceover points to memory as a process of abridgement and imagination, the kind that remembers an active decision as something over which one had little choice (‘I found myself sitting on a plane’). It is as if, in uttering these words, Martinec is only just remembering an existence prior to what has since become an ongoing trauma. Indeed, the delayed resurfacing of such memories is integral to their quiet, retroactive dread: the resurfacing itself asserts the irrevocability of lost time.

Brexit was a word to be heard before it was a concept to be understood. (And arguably, no pun intended, it remains so.) Ditto its associated prefix, ‘No Deal’, which exploited a catchphrase already in common parlance in Britain thanks to a gameshow – imported from the Netherlands – whose gimmick saw Noel Edmonds chatting into a phone, upholding the pretence that some conniving agent named The Banker, a villain imagined into existence by the needs of pre-teatime telly, was listening and talking to him on the other end.

As the sloganeering classes will attest, the catchiness of these terms, their pantomime-like preclusion of nuance, is their success: something to shiver at, recoil from, invest in, be distracted by, grow bored of. In June 2016, days after the UK’s referendum on withdrawing from the European Union, Iain Sinclair remarked upon Brexit’s phonetic power, referring to a ‘commodity that sounds like a cereal bowl of Nordic cattlecake manufactured from wood shavings with an added ingredient to purge the bowels’. However it might be understood, reducing this campaign to a single word – and in some respects, that was the campaign – has only enabled a false and apparently widespread sense of empowerment, promoting the vox pop as a great leveller and committing the self-styled expert to a hill on which they must, at all costs, die. As Theresa May’s brazen tautology put it: ‘Brexit means Brexit.’

It is against this backdrop, of confusion amidst forward propulsion, of finding oneself on a plane to Aberdeen as part of some delirious causal logic, that The Brexit Tree’s stakes emerge. Tracing the intentions and controversies of an art project commissioned by Deveron Projects in Huntly, Aberdeenshire, for which artist Clemens Wilhelm planted – eventually – a weeping willow to mark Britain’s exit from the EU, the film finds in rural Scotland a microcosm of divided Britain. As such, the film serves the dual purpose of providing context to Wilhelm’s project – which itself functions as a kind of Rorschach test, its mere mention prompting a range of projections and presumptions – and recording a snapshot of speculations and standpoints regarding the meaning and significance of the historical moment being lived through.

Wilhelm explains early in the film that the weeping willow has ancient healing properties. At the same time, its name derives from its mournful appearance, with rain falling from it like tears. The tree grows a metre a year, but its lifespan is limited to half a century – the likely duration, at minimum, of what Wilhelm calls Brexit’s own historical echo. ‘The people in Huntly will have a chance to see this tree grow and see it unfold,’ says the artist, ‘just as they’ll be able to see the unfolding of Brexit.’ Conversely, The Brexit Tree is also an examination of the relationship between curation and community. Among the film’s many shots that beautifully evoke complicated notions of unity and resilience within Huntly is one in which a few school lads walk past the perennially closed, aptly named Bygones store at 1 Bogie Street. Interspersing shots such as this with interviews with Clemens’ fellow artists and artworkers within the Deveron Projects orbit, the film observes the challenges and responsibilities that a publicly funded arts organisation must negotiate and assume. ‘Our role is to question and to promote discussion,’ says Petra Pennington, Deveron’s then Art and Community Worker.

As the film articulates, however, such aspirations don’t always or necessarily translate to unanimous acceptance. In one key sequence, sceptical-cum-hostile remarks, posted to social media by Huntly residents responding to local press coverage of the project, are reproduced over drone images taken of the town’s pretty, depopulated streets. The human emotion of the comments plays out in contrast to the elevated, non-human vantage point of the camera – and is offset further by the dehumanising nature of the emoji. As hinted by an interviewee like Manick Govinda, Founder of Artists for Brexit, a conversation that ought to be taking place offline isn’t taking place at all – and Martinec and Wilhelm do supremely well to present an array of viewpoints, a kind of plurally authored fog, without platforming the xenophobia typically expected of such discourse.

Taking Brexit’s own abortive stutters as its structuring device – with segments dedicated to the ultimately postponed planting of Huntly’s weeping willow on both 29 March and 31 October 2019, as well as its ultimate completion on 31 January 2020 – Martinec and Wilhelm create an intrinsic tension between present-tense uncertainty and past-tense melancholy. Like the narration in its opening sequence, the film’s interviews, captured on the speculative run-up to each new leaving do, inevitably speak to a constant mode of catch-up, as if each new episode constitutes a further rug-pull: something to adjust to, something that has already passed. In this sense, The Brexit Tree is a breakup film, the kind that dares to find hope at the heart of a wound. It is what it is.

What now? What, indeed, of the future? As one Brexiteer suggests here – thereby rendering the whole ordeal apparently redundant – things may well continue without much change. And: they may well usher in a new phase of catastrophe, a new era of fascisms and socialisms violently struggling against the globally entrenched neoliberal regime. One hope, articulated two thirds into the film, is that whatever the outcome, those on opposite sides of the divide can discuss the reasons as to why any of this had to happen. It’s just the sort of remark that’s said during an actual separation – to which the other person, who likely initiated the process, commonly responds with indifference.

DEVERON PROJECTS
Deveron Projects is an arts organisation based in Huntly, a market town in the north east of Scotland with a population of 4,500. They have worked with the history, context and identity of Huntly since 1995. Working with the town is the venue methodology, they create projects that connect artists, communities and places.

Deveron Projects launched Weeping Willow Tree in Winter 2018/19, commissioning artist Clemens Wilhelm to focus on social and cultural divisions created by the process of the UK withdrawal from the European Union. The project revolved around the planting of The Brexit Tree on 31 January 2020 in collaboration with the communities of Huntly.

CLEMENS WILHELM
Clemens Wilhelm is an artist and filmmaker based in Berlin whose practice ranges from film/video to photography and performance. His works have shown internationally in institutions and festivals such as Centre Pompidou Paris, Rockbund Art Museum Shanghai, and Anthology Film Archives in New York. In 2019, he received the Stiftung Kunstfonds One-Year-Working Grant of the Federal State of Germany.

JAN MARTINEC
Jan Martinec is an artist and a filmmaker based in Berlin. He believes that ‘being an artist is a political statement’, and his films explore this very idea. His films have screened at Ji.Hlava International Documentary Film Festival in Czech Republic, and as part of exhibitions and screenings in London, New York, Tilburg (Netherlands), Prague, Evora (Portugal), Xiamen (China) and Seoul.

CLAUDIA ZEISKE
Claudia Zeiske is the Director of Deveron Projects. With a life long-long commitment to local-global activism she followed has followed the unfolding of Brexit with apprehension. She has initiated several Brexit related projects, as well as Weeping Willow Tree, including Home to Home: a walk from her home in Huntly to her childhood home in Unterpfaffenhofen near Munich.

A.L. KENNEDY
A.L. Kennedy was born in Dundee. She lived for almost 30 years in Glasgow and now stays in North Essex. She has written 9 novels, 6 short story collections, 3 books of non-fiction and 3 books for children. She has won a variety of UK and international book awards, including a Lannan Award, the Costa Prize, The Heinrich Heine Preis, the Somerset Maugham Award and the John Llewellyn Rees Prize.

Title image: The Brexit Tree, 2020. Courtesy of the artists.