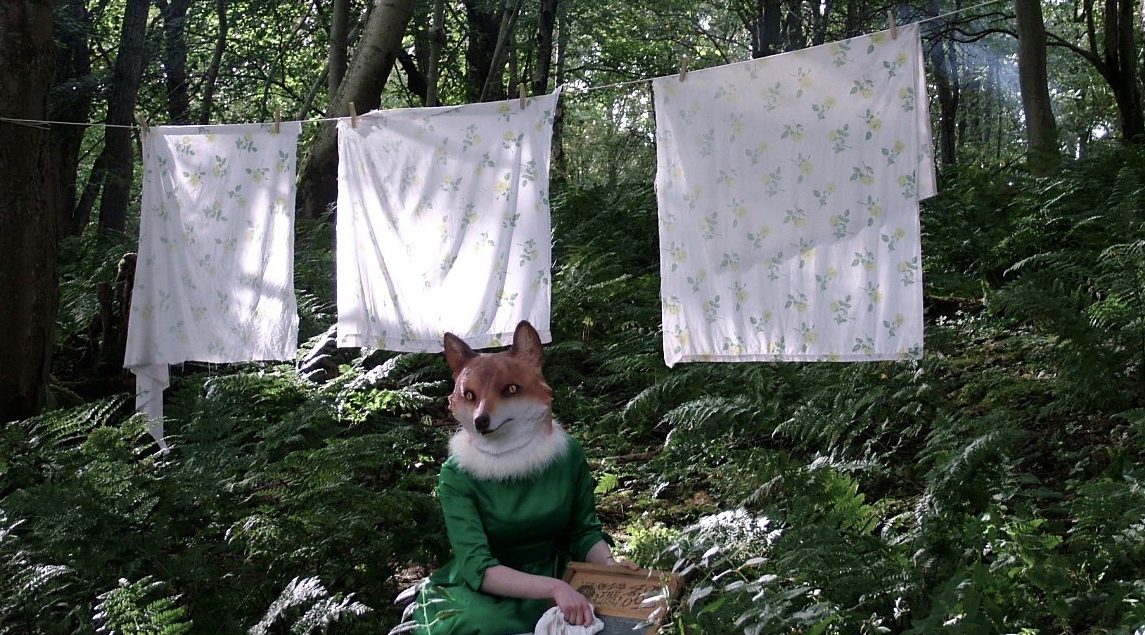 Following their head-turningly unforgettable public presence at this year’s Alchemy Film and Moving Image Festival, Dudendance Theatre return to Hawick with Detour on Route to a Movie, a double-bill of new film material accompanied by live piano and synth by Fabiana Galante.

Out of the Wild (20′, DVCam) was shot at the Haining Estate in the Scottish Borders with a group of local young people and based on an outdoor performance commissioned by the YES Festival in 2018.  Half human, half animal hybrid creatures inhabit the woods, their slow mesmeric actions suggesting a mysterious soap-opera. Shot entirely in long shot, without close-ups, the film captures the original live performance. Fabiana Galante, composer and musician, will provide accompaniment on piano in the style of a silent film score.

Detour (40′, DVCam), shot on location in Argentina, stems from a project originally shot in 2002. Loosely based on Jean Genet’s The Maids, the very minimal action follows a day in the life of a manservant. The relationship of the servant and his mistress unfolds through the layering of the protagonists’ voices. The footage is framed in small, claustrophobic spaces giving the characters a theatrical presence. Live and recorded sound will be interwoven during the screening with a sound score by Fabiana Galante.

Dudendance Theatre
Dudendance Theatre create work that defies a singular interpretation having pioneered an original voice by layering film, soundtrack, narrative and movement. Each new piece exists within an ever evolving narrative whereby characters re-emerge in later work. Very often live performance is transposed into film, shifting from the rehearsal studio onto location and then re-absorbed into live work. The starting point remains physical and devised from rigorous research with international collaborators as well as non-professionals. Some work exists purely on film and has been screened in galleries and cinemas. Dudendance also create site-specific pieces, most recently as durational work in public spaces.

Fabiana Galante
Fabiana Galante, pianist and sound artist from Buenos Aires, has been working in the contemporary music scene in Argentina since the 1990s. Her main interest lies in musical interpretation and creation away from the ‘concert’ environment. This has led her to work with musicians, filmmakers, improvisers and performers on experimental collaborative projects in Argentina, Chile, Brazil, United Kingdom and Germany. Currently, Fabiana teaches at Universidad de Montevideo, Uruguay, and is working on several projects with composers, improvisers and multidisciplinary artists.