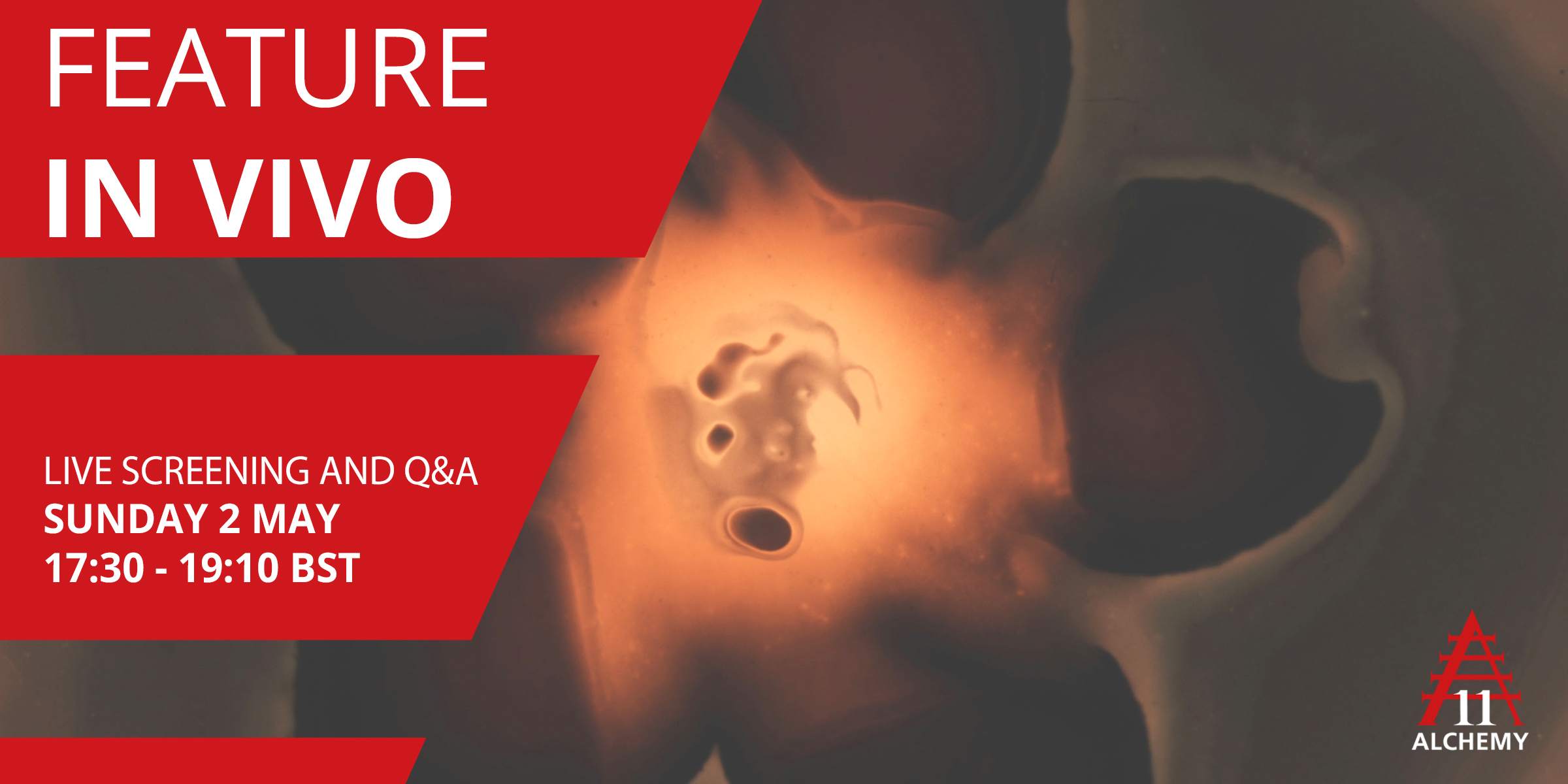 AUDIO DESCRIPTION
In Vivo is also available on-demand 29 April – 3 May with audio description for blind and partially sighted audiences.

Life is cruel, life is beautiful. To appear at all in this world is to begin the process of vanishing from it: a flash. Consider the opening credits of In Vivo, a new feature film by Karel Doing. A succession of handwritten names – the artist’s and those of his collaborators – survive onscreen only for as long as it takes for them to be scribbled out. For the most part, the names are erased right-to-left, in an assertive reversal of the left-to-right narrative logic of western scripture. As if what is to follow concerns erasure, the course of extinction, and even perhaps the binaries and hierarchies established by a system compelled to classify by means of east-west and north-south divides.

In Vivo is an assemblage of found footage – some personal and intimate, some extracted from a public domain and collections gatekept with a capital G. Doing – an artist in residence with Alchemy Film & Arts in 2019, when he worked with community groups in Hawick towards Bog Myrtle and Flamethrowers, a plant-based film installation exhibited on the town’s High Street – doesn’t provide much in the way of conventional context as to how these varied sources interrelate or how they should be read. But in editing them together at all, he asserts a radical subjectivity, an authorial presence that is autobiographical even when the images themselves are clearly borrowed from another vault. Doing positions himself, and the histories through which he has lived, within a much vaster narrative, implied through the other-realm textures of analogue footage as much as the actual content of his archival excerpts.

The film’s opening shot proper, captured in the middle of Rotterdam’s Willemsbrug on the River Maas, is a dizzyingly rightward pan, the camera staring forward even as it pivots on the spot (if you’re especially sensitive, notions of forward propulsion might be further enhanced by the sound of a film reel moving through a projector). The one near-constant in this frame of looped variation is the filmmaker’s own hand and face, the former holding a mirror that reflects and keeps the latter in the centre of the frame. A selfie made in an analogue world, the shot pans right so that the landscapes far beyond Doing’s reflection move left. Everything changes as it stays the same: just as each play of a film reel produces new blemishes, each rotation reveals something different.

The contradictions of reversal are a motif that the film will repeat. In the relentlessly agitated four-digit countdown that punctuates his sequences, Doing suggests a return to the origins of existence, before the tonal register shifts and the numbers begin to promise some inevitable but forever-deferred doom. The filmmaker also frequently slows down his images. Like an obsolete, silent-era framerate, the temporal manipulation here makes otherwise throwaway scenes seem eerie – as if the people in them are ghosts fighting to stay alive. Or indeed, are reluctantly kept alive by virtue of having been filmed at all.

As such, In Vivo feels purgatorial in its apparent ambivalences. As if it must feel everything all at once, Doing’s film switches often between the calming and the horrific, placing assaultive strobes next to scenes of sinking ships and impossible motor collisions – staged and otherwise – and pairing a soundtrack of screamy distortion and rising cacophonies with serene images of caterpillars, spiders, and bees going about their individual work. Phytography, the technique that the artist has helped to theorise and promote in recent years as an eco-friendly alternative to photochemistry, also features, alongside the kind of abstract chromosomic film textures that simultaneously evoke – aided here by Gareth Davis’ rich, considered sound design – the bodily and the cosmic. A glossolalic human voice recurs – singing, creaking, communicating – to lend excitement, tension, warmth.

Did people’s lives flash before their eyes prior to cinema? Did their dreams have cinematic grammar? An epic compendium of a life in movies, and more specifically in the raw material of movies, In Vivo reminds us that it is in its capacity for abridgement, and in its ineluctably visible modes – whereby even a black screen, a conscious absence, becomes its own image – that film is an intrinsically human format; a mechanical distillation of the material-magical dialectic. On the one hand there is the splice, the cut, the simultaneously generative and violent tendencies of montage itself. On the other hand, look here at this like-for-like real-time imprint of an event that actually, properly happened. Where re-enactments are, in the same moment, both representational of another time and documents of their own.

Which is to say that In Vivo is kind of astounding: haunting, angry, hopeful, sad. It’s hard not to feel something when, through the sonic fog, one hears the bracing clarity of a London Underground announcement: ‘Change here for the Circle and District lines.’ Other sequences bedazzle and haunt in their calmness: sunny street scenes in Budapest, the closing procession through scribbled-out organisms and fauna, that scene halfway through of a young boy bouncing joyously on a trampoline.

Of Maas and men. Moments pass. This last example, of the three just mentioned, is quietly absurd in its contradictions: the kid’s to-camera performance, the documentary staging of the camera itself, the less-than-lovely milieu of busy traffic passing back and forth behind the child’s apparatus, unheard due to asynchronous sound. The colours, the composition, the fixation on these details: like something you’d expect to see in a film from the 1970s American avant-garde. Or in a Karel Doing picture in 2021.