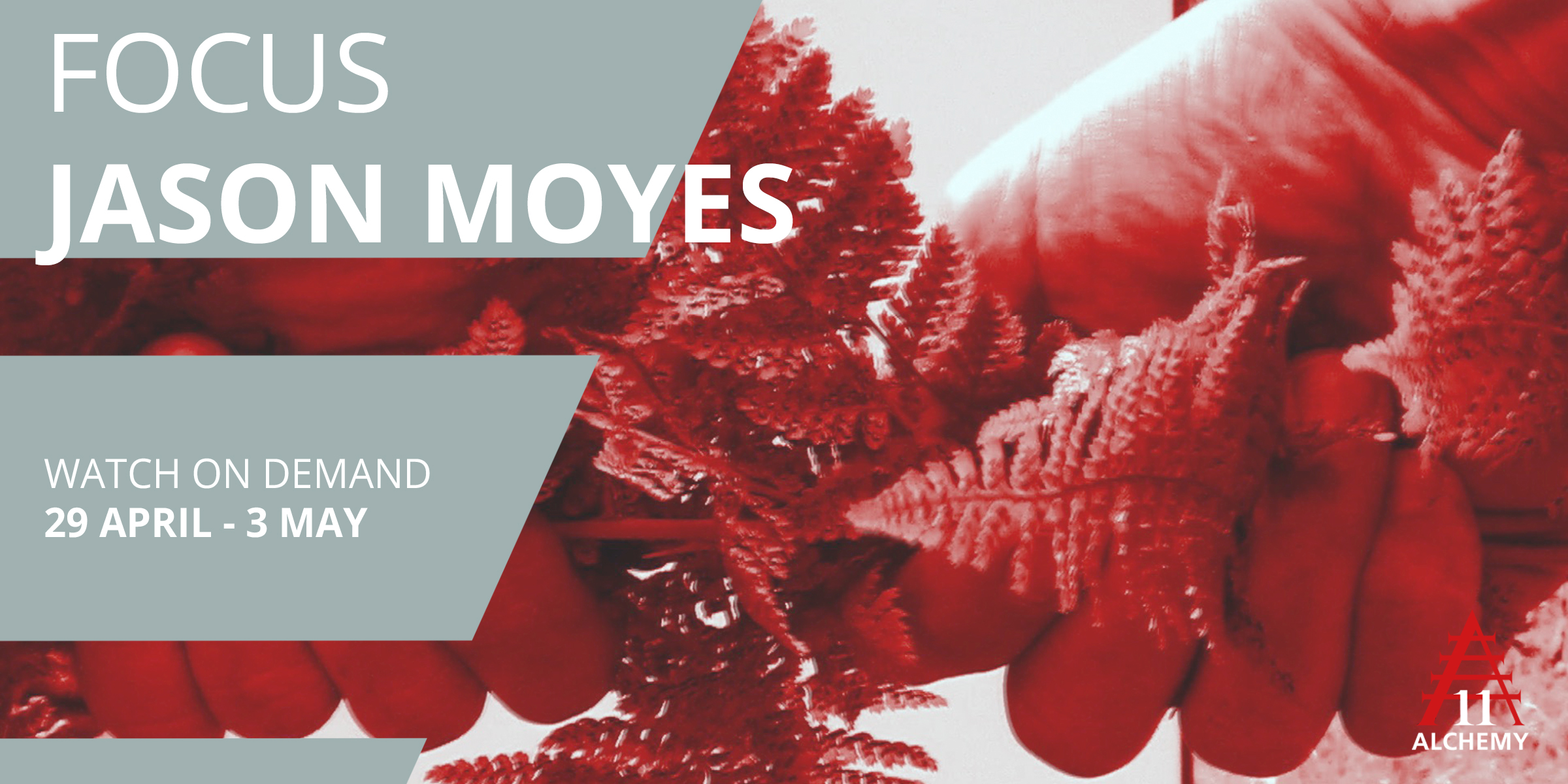 Experimental film and installation artist Jason Moyes lives and works in the Scottish Borders and has been exploring the moving image since 2007. His work challenges traditional notions of sublime beauty in landscape by focusing on its unloved corners. His work has been shown in the UK, North America, Europe and Asia. He is a founding member of the Moving Image Makers Collective, which emerged from a series of community filmmaking workshops run by Alchemy Film & Arts in 2014. He presents the experimental film podcast Into the Mothlight. 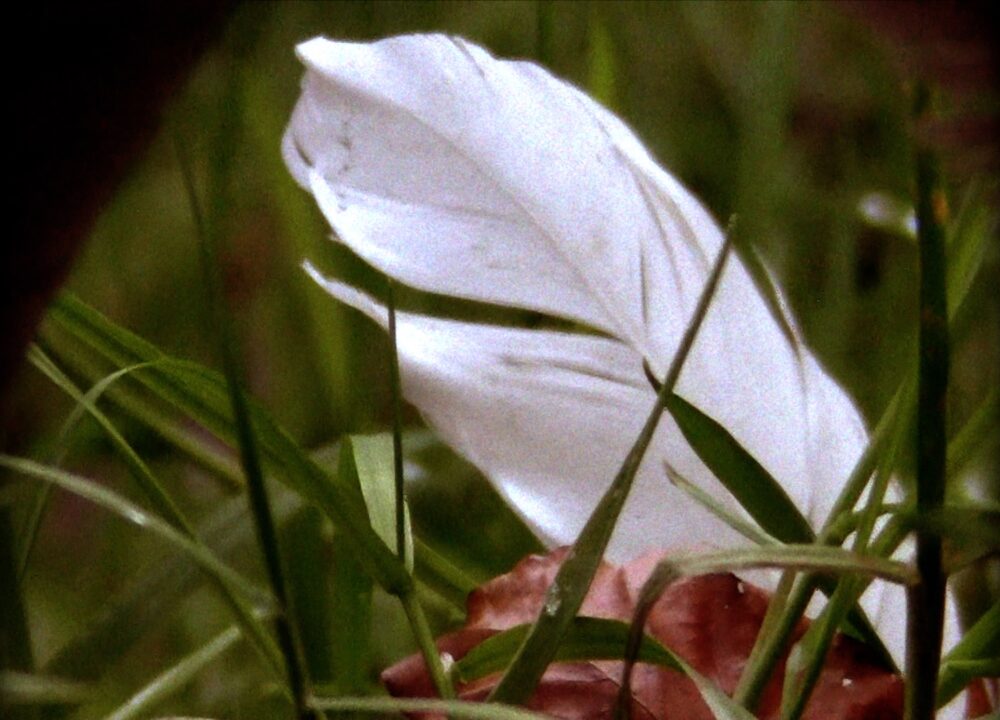 SITDOWN
Listen to a conversation between artist in focus Jason Moyes and Alchemy programmer Marius Hrdy, whose programme notes can also be read below

A transcript of Jason and Marius’ conversation can also be read here.

Jason Moyes’ film and video work fixates on various environmental and infrastructural features and maps them often to ideas of rurality, Scottishness and the colour red. Based in Denholm, five miles outside Hawick, Moyes returns repeatedly to themes inspired by his immediate surroundings and the architectures of energy: masts, pylons, radios, and how these define our engagement with nature and outdoor space.

Made between 2014 and 2021, the films presented in this Focus programme interrogate such themes through documentary, home movies and found footage, in addition to stop-motion animation and computer-generated manipulations of the image. Moyes frequently mixes his Super 8 analogue film practice with digital imagery, recycling and rearranging material from his films into new contexts to suggest a fluid temporal space connecting his works. His DIY approach is reflected in his free use of form and material, and a nonconformist questioning of traditional narratives of identity – while playfulness and curiosity inform his practice of finding beauty in overlooked places and objects.

Starting with This Way for Fun (2018), we see the artist himself applying a sign to the bark of a tree pointing to a place of enjoyment – presumably found close by. The restless camera-eye searches through the forest grounds and encounters more signs, yet the proposed state of mind stays elusive. Eventually Moyes buries the sign and its empty promise with cones, fern fronds and twigs to be soon incorporated into nature’s pace. Here, Moyes articulates a paradox: the human drive for adventure becomes superfluous when embedded into nature and its non-spectacular essence.

Conversely, Celluloid (2017) explores speculation with analogue home movies. A visual album of a family trip to New York and a young woman dancing a Scottish jig in traditional aboyne dress are broken up by the purity of red lines on clear film, evoking a liminal red thread of life between belonging to a place and longing for another. Imposed as text on the moving image, William H. Burroughs’ demystification of the American dream – whose freedom is obstructed by the very system that promises it – rings with the tension of how anyone can ever break out from their own heritage.

Wandering this path, Red Cap (2016) follows a man in a suit walking through Hawick and the Scottish Borders. Red Cap is a dwarf in Scottish folklore that inhabits ruins and murders travellers. He needs to dye his cap red with his victims’ blood to survive. The protagonist paces through abandoned places including a cinema, a castle and the forest. Seemingly the only survivor left in this world, he films himself with a camera. In doing so, he enters into a conversation around alienation and identity in rural surroundings.

In contrast, Red Lights and a Solstice Moon (2016) takes its colour literally. Through a wide-angle shot of a transmission tower set against the backdrop of a diffuse, cloudy horizon, we observe four red blinking lights darting from the mast from daylight into darkness. Over such shots, we hear a radio transmission voice repeating a set of numbers in Russian. The interplay of the mast’s artificial lights set against the natural light of the moon suggests visual signals pulsating from a distant civilisation.

From the peripheral vastness of wide horizons, we arrive in the built-up urban surroundings of Berwick-upon-Tweed. B is for Berwick (2014) is an unusual sightseeing tour around the English town’s centre – the locations obscured by Russian subtitles and inserts of maps showing street names of the city of St. Petersburg. Bookended by landmark clocks and the ticking on the audio track off-screen, the film disorients ideas of place, architectural structures and structural time.

Sea Sisters (2015) juxtaposes panoramas of gushing waves hitting the seashore with the audio of two sisters expressing their attraction to its destructive powers. Sometimes their voices form a mantric chant of ‘to the sea, to the sea’, not unlike Ulysses’ sirens with their fatal call. They reminisce about their ancestry and with it their past potentials that floated away with the passing of each tide.

Staying with the elements, Wind Blows at Seven Frames Per Second (2015) asks how wind might be captured onscreen. Moyes makes this palpable using time lapse and an analogue synthesiser to create a choppiness between sound and image. We wander through thistle and wheat fields while the wind serves as a visceral messenger carrying the news to buildings and structures. Sometimes the message is distorted, sometimes a revelation. Yet regardless of its speed, this wind always blows at seven frames per second.

Wind often recurs as a motif in Moyes’ work. It also features – and plays a dynamic role – in Two Angels (2015), a portrait of twins in black-and-white. To a haunting after-echo soundscape, they play handclapping games, exchange flowers and lay them on a grave. Holding film strips in either hand, their celluloid wings wave in the wind as if flying energy sprouted from them. They are a couple of rural superheroes among dilapidated ruins.

Relating back to the passing of time, Alarm (2014) follows hands filing through blank pages of a notebook and everyday objects. Items of keeping time, like a clock and an impossible date displayed on a calendar, tell about the inner struggles of work and question what can be achieved in a lifetime.

Energy Sent Along Wires (2019) – a multimedia installation in Hawick town centre at Alchemy Film and Moving Image Festival 2019 – lays bare a physical connectedness to the invisible powers of electricity that thread even through the most rural of landscapes. The stomping of a human heartbeat surrounds engineering objects like spindles, pylons and the vast apparatus of a power-generating dam.

Sticking with functional architecture, Codename India: 1967 (2017) is a point-of-view exploration of a flooded Royal Observer Corp observation post in Scotland. ‘India: 1967’ served as a codename for a strain of smallpox taken from India to a biological weapons facility in Soviet Russia. As Moyes’ camera descends into the submerged bunker, crackling sound and water blobs tell of the claustrophobic surroundings underground, while shadow play contrasts the structural examination of bacteria, propaganda, and how to find shelter from them.

Moving on from architecture, Frames, Shapes and Symbols (2017) is an archaeological exploration of the solemnity of the forest. Captured on colour analogue film, sticks, trees, paths and ferns waving in the wind evoke a discovery of unknown territory. Everyday objects like a saucer, kettle and the frame of an old TV set relate to the traces of humanity and its nature-shaping quality.

In contrast, Film the Forest (2018) engages with the forest floor within domestic surroundings. In this stop-motion film, leaves dance around a buried Super 8 cassette, accompanied by a flute soundtrack and organ scales. Here a roll of Kodachrome is dissolving between ferns while the camera is both capturing nature and consuming it.

Film the Forest No 4. chemistry, process and light (2021) captures the synthesis of the artist’s filmic range. It is a veritable forest symphony of digitally morphed manipulations, green-to-red tinting and double images producing a 3D effect. We are shown a vase filled with fern fronds, twigs and fermenting Super 8 film strips, that are later reborn from their decomposition and projected onto a white screen set up among trees – conjuring the spirit of human objects as symbiotic with nature.

the beauty and sadness in the patterns of two chemical reactions (2019) treads different ground, returning to a nostalgic longing for a bygone time. Film hand-processed in caffenol engages with footage of a white cat and the face of a person smiling into a conversation of immaterial memory and material deterioration. The exchange of gazes and emulsive abstractions on the film strip invoke moments of appearance and disappearance.

Moyes’ cosmos comes full circle in the final film of this Focus programme, From Scotland with Love (2020). Here, the dancers of Celluloid reappear, and we study their exact movement in frames of double and half diptychs. Through slowed down observation of their dance, Moyes redresses the meaning of choreography as a collective ritual of resilient identity.

MARIUS HRDY
Marius Hrdy is a cultural worker, film programmer and writer based in Amsterdam. He has programmed retrospectives of filmmakers Martha Colburn and Ted Fendt and recently co-curated a historical retrospective on Dutch experimental filmmaking, together with Amsterdam’s EYE institution, shown at the Austrian Filmmuseum and the Anthology Film Archives. His film writing has appeared in the Brooklyn Rail and KINO! etc. He is a member of the cinema collective Filmhuis Cavia. He is a member of the Alchemy Film and Moving Image Festival programme team.