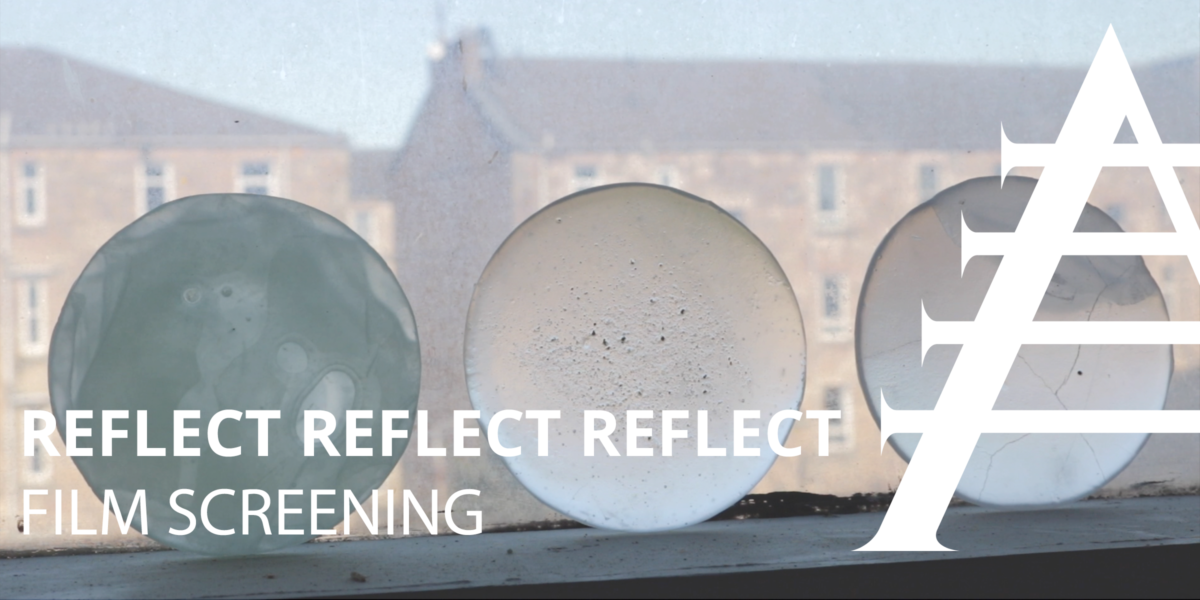 From granular sands to the vast Atlantic, Reflect Reflect Reflect presents five films made in Scotland that experiment at the confluence of water and memory. Buoyed by and rooted to location, the films address archive from a variety of perspectives, each refracting light onto Scotland as a place and an identity.

Reflect Reflect Reflect opens with the etymology of the verb ‘tangle’: unconcerned chatter on a ferry; a body walking on the shore; crashing, cold waves. In I Walk There Everyday But I Never Saw It That Way, we are confronted with the notion that memory, the ocean, Scotland, are interwoven concepts. Ed Webb-Ingall’s community film is a portrait of a people who live on the edge, on and around Arran. Using archive as a trigger, the film draws out conversations around the sea, with the voices, knowledge and opinions of locals sewn together with handheld footage of group workshops, expert interviews, turbulent waves, and a poem about the sea. The community can be felt in all aspects of the film. In this way, Webb-Ingall uses archive as a tool to interrogate not only the past and present, but also to examine the future; questioning where the ownership of the sea, and the narratives around it, lie.

By contrast, Doll Thomas presents the sea not as an edge, but as an entity itself. Opening with the gentle lapping of waves, Ashanti Harris’ text-based collage film creates a modern archive for a history that has not been, by virtue of the extractive, colonial power structures in Britain, prioritised. The film weaves accounts from merchants and travellers, punching neon green headings onto the screen, creating an aural archive of a subject whose international relationship with Scotland is as telling of Scottish history as any photograph or history book; calling to question the role archive plays in the subjective histories that are presented as fact. Doll Thomas explores Scottish identity not just within the confines of the Scottish shore, but as being moulded and carved by the Atlantic itself; from Scotland’s role in empire, and from the imprints left on it by the rest of the world.

Rather than the conceptual, it is the physical relationship between sea and memory that Reflection, Refraction explores. Flora Debechi, an interdisciplinary artist from the Scottish Borders, notes that when ‘looking to the sea, I saw it as a giant lens’. Debechi’s film, which lulls with the flow of waves, is a meditation on the tangible relationship between sea and archive through the creation of lenses from sea glass. The scale of the film is relative to that of the lens, the glass from the sea – we see the world up close, gently hand-held. Through this process, what is usually the collector – the lens – becomes itself an object of memory, of collection.

Red Hawthorn, although narrative fiction, presents itself as though it were archive footage, or at very least an ode to it. Crisp sandwiches, radio excerpts playing 1969 classics, and the jump from nostalgic Kodachrome scenes of vibrant red to granular black and white shots contribute to an overall archival vibe. Florrie James presents the rural Scottish seaside as a world in itself, a world where the salty wind is ever-present, the lullaby of rocking boats feels like second nature, a world away from the city, where the anticipation and potentiality of life within one’s youth is as tangible as the slimy, lumpy seaweed on the beaches. James creates a fictional memory of youth in the seaside spaces of Scotland, the spaces on the edge, the spaces that are so often forgotten.

It was through directly exploring the North British Rubber Company archives in Dumfries and Edinburgh that Alberta Whittle developed What sound does the Black Atlantic make? Whittle’s work poses questions around Scotland’s relationship to the British Empire and the damage it has caused in Barbados and beyond, channelled through a formidable, rhythmic soundscape accompanied by powerful images – a man swimming, women dancing, marching soldiers, scenes of war and explosions. By examining the historical relationship between Scotland and Barbados, Whittle explores the weight carried by the ocean between them because of this, and the persistent racism in the UK connected to it. Images from the process of collecting and working rubber, hands drawing latex from trees and moulding the harvest, are juxtaposed with archive footage of British riot police, anti-immigration marches and British colonies. This contrast demands the viewer to confront the processes and mechanisms which are used in an attempt to control, stretch and mould Black people’s lived experiences in the UK.

Each of these films, in its own way, challenges what we consider to be archive, how we formulate memory both individually and collectively, and simply, that water is an intangible part of Scottish identity. What this collection illustrates, is the flowing and changing nature of memory, depending where on the shore you are standing.

Rachel Shnapp is an emerging filmmaker and curator based in Dumfries and Galloway, working across both narrative film and art film. Rachel’s work explores the socio-cultural and natural landscapes and environments of Scotland. She is currently programming with Alchemy Film & Arts as part of New Promoters, Film Hub Scotland’s training scheme for emerging curators.