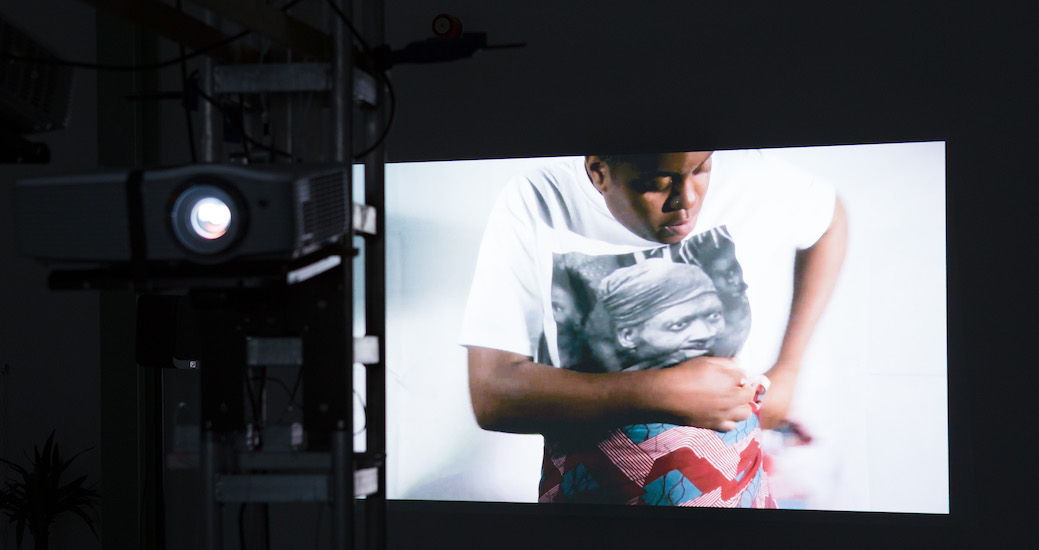 Sitdown is an Alchemy Film & Arts series of artist interviews, published to complement its exhibitions, residencies and other events.

Onyeka Igwe’s No Dance, No Palaver is a series of works produced from the artist’s research into the Aba Women’s War of 1929, considered the first major challenge to British authority in West Africa during the colonial period and a historic example of feminist protest.

Consisting of three films, No Dance, No Palaver was exhibited in Hawick as part of Alchemy Film & Arts’ Exhibitions Programme in September 2018. Onyeka spoke to Rachael Disbury, Alchemy Film & Arts Production Director, about archives, the multiplicity of film and challenging the colonial imaginary.

Alchemy: No Dance, No Palaver surrounds the practices of the Colonial Film Unit and the unfolding of the Aba Women’s War, both of which admittedly I personally knew very little about. Why did you decide to make this work?

Onyeka Igwe: I had found out about the Colonial Film Unit (CFU) when making my last film that was about my grandmother. I had been looking for archival material from Nigeria during her time and the only type of material that existed is colonial. I found out about the archives relating to the CFU and a project about 10 years ago that digitised some of that material after making that film.

I was interested in making work around the archive and the experience of looking for oneself in a contentious place. I had read a self-published autobiography of my half uncle who began it by trying to date his birth. He thought it was somewhere around the Aba Women’s War. I’d never heard of it and it piqued my interest as a feminist or someone interested in the histories of politics and protest.

I went looking at the National Archives for traces of it and found a commission report about the protest. I read some testimony from the women who had taken part but thought that all of this was refracted through a colonial lens. The women were talking through the bureaucracy of the British state.

I’ve kind of grown up with these commissions – Macpherson, Iraq Enquiry, Grenfell, etc. And I guess I see them for what they are, ways to polish or package history and for the state to escape blame. I was interested in making some work that could in some way re-represent the protests in another type of way.

I was interested to find out that women within West African communities had a significant say in political decision making prior to colonialism enforcing more patriarchal structures. I also can’t help but think about what was going on in the late 1920s in Britain with women unlocking more rights, yet the complete hypocrisy of it when you look at what was happening in Nigeria.

When I first read about the ways in which the women protested – using their bodies and nudity – it reminded me of FEMEN and arguments around naked protest. Those arguments offered [naked protest] as a new phenomenon but obviously there is a longer history of women and people in general using the tools at their disposal – their bodies to protest.

I guess it’s relevant in that way, but also because these ideas that the colonial imaginary had about Blackness and Black women specifically haven’t gone away and these types of images themselves are still in circulation. I think that in our society, the British Empire is not that much known about and allows people to argue that it was good, beneficial or did no harm. So making this work and regurgitating the archives is an attempt to circulate counter-histories of the colonial past and present.

I think you really see the exploration of a counter-history in your series, particularly in Specialised Technique. Why do you think film is a good medium to open up that dialogue? As in, what drove you to work in this way, with these films and this soundtrack?

I work with film, in general I guess because of multiplicity. It allows for the interplay of images, sound, text, voice, dance, performance, etcetera all in one frame. And I guess most importantly time – it allows for multiple times to be present at once and for a work dealing with the blur between now and then or in a way attempting to blur those things that was important.

As for the soundtrack, it functions differently in each piece. In Her Name in My Mouth, I was trying to work with a composer to create sound as an echo, at a distance, a faint reminder of a memory. With Sitting on a Man, it was about allowing the present-day sounds of the dancers to be present in the silent archival images. One of the dancers had said they she wanted to bring the sounds’ syncopation back to the archive, so that was a key influence. And for Specialised Technique, I was trying to create disjuncture with the sounds, to create a space for the audience to look at the images in other ways. To alert them to something amiss.

Which archives did you use?

I used the BFI National Archive, the National Archive and the Bristol Archives. Bristol has the collection from the former Empire and Commonwealth Museum. I did some volunteering there, auditing and digitising their collection, which allowed me to create relationships with the archivists there as well as seeing the extent of their collection. For the BFI and TNA they have online collections and I visited them both in Kew and Soho.

Did you uncover more of a familial connection beyond the initial link with your uncle?

I was interested in familial connections to the protests as Aba isn’t far from where my mother was born and grew up. But when I initially asked her, she didn’t really know that much. But she began asking her sister and friends and piecing together some ideas about the protest practices.

I recorded her voice for Her Name in My Mouth, reading out the names, singing some folk songs and saying idioms that she thought she could attribute to women of that time.

How does No Dance, No Palaver and the methods you used reflect your practice, and what are you working on next?

I guess the approaches that I use in all of these works reflect my practice. An interest in the archives, use of dance, soundscapes and soundtracks and rhythmic approach to editing are kind of hallmarks of the work I make.

Since starting this series, I’ve made diverse work – a project on the architecture of prisons and an installation looking at songs from the football terraces. But they are united with a political through-line and the mixture of performance and archive.

I am working on a longer project now that is approaching the archives in a different way, based around the conceit of putting fiction in the archives. It’s based in Nigeria and I hope to see the other side of the colonial archives and what kind of fugitive practices emerged and exist in a different cultural space.