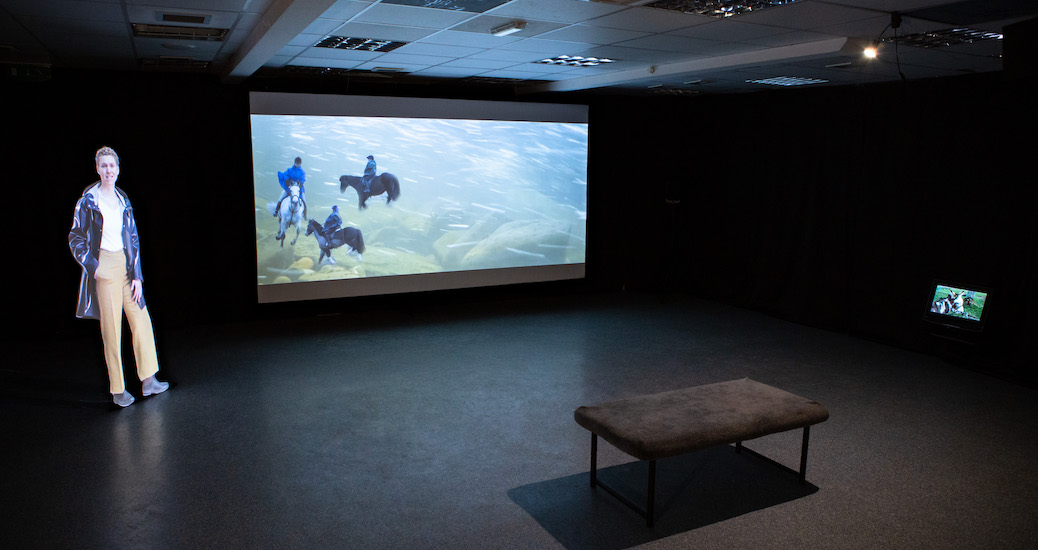 Artist Rhona Mühlebach was commissioned by Alchemy Film & Arts in January 2019 to create a new film installation set in the Scottish Borders. Inspired by both Western classics and the Borders Reivers, Rhona began filming her fiction-based The River, the Horse and the Woman in January 2019, collaborating with local riders and drawing upon the unique vistas of Hawick’s surrounding landscape.

With more horses per head of population than anywhere else in Scotland, as well as a rich heritage of tracks and trails dating back thousands of years and traditional boundary ride-outs taking place annually, horses are as characteristic to the Scottish Borders as its rivers and architecture.

The River, the Horse and the Woman takes the form of an imaginative multiscreen video installation, inspired by the deep-rooted history and connection between the Scottish Borders and horses. The film features Rhona in character as The Narrator, telling the story of a river, a horse and a woman. Not as tame as the narrator initially thought, the horse-and-rider protagonists quickly take over the show, rendering the narrator redundant. The River, the Horse and the Woman was screened in Hawick as part of Alchemy Film & Arts’ Exhibition Programme 2018-19.

A trailer for the film is below.

Rhona Mühlebach is an artist and filmmaker based in Glasgow. Influenced by nature and science documentaries, and how we discover the world through them, Rhona is fascinated by incorporating fiction into narration-based video works. Rhona comes from a cinema background and often manipulates the form and technical traditions of big-production movies and TV documentaries in her contemporary practice.

Rhona was part of Bloomberg New Contemporaries in 2017, and her work was exhibited at Art Basel as part of the Swiss Art Awards 2018. Her films have been shown at numerous international Film Festivals, including 2018’s edition of Alchemy Film and Moving Image Festival, and the Festival del Film Locarno, where her work was awarded several prizes.

The River, the Horse and the Woman was supported by: