Our guest blogger, Robin Thomson, explores some of the highlights of this year’s festival, starting with a review of Ruth Maclennan’s Theodosia..

For a 20-minute film that mostly comprises slow, almost still camera work, Theodosia leaves you with the impression of having covered a lot of ground. And for sure, the peninsula of Crimea is compact enough that its history and associations pile upward through time rather than horizontally. Made originally as part of an installation, Ruth Maclennan’s film is not so much a narrative as an interweaving of three literary threads – a part-fictionalised account by the German artist Joseph Beuys of crash-landing over Crimea in 1944 (while he was serving for the Luftwaffe) and being rescued and nurtured back to life by semi-nomadic Crimean Tatars; the Roman poet Ovid’s description of his homesickness and of the barbarism of this Scythian outpost; and poems by the Russian poets Marina Tsvetaeva and Osip Mandelstam, who were among the many of the Russian intelligentsia to visit and love Crimea, which had long been a holiday retreat for the privileged and that, under Communism, was turned into a mass resort (for its time) for Party members and prize-winning workers. 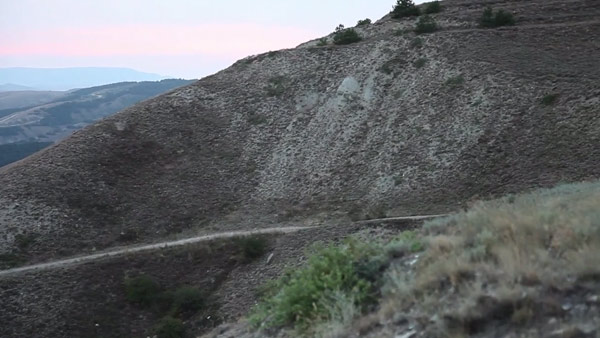 With its slow and unforgiving pans across prickly, often despoiled landscapes, yet which still respond to the observer with intense beauty, Theodosia is a dose of paint stripper to the thick varnish of romanticising that all parties (except Ovid, perhaps) have succumbed to in relating to – and, crucially, asserting ownership over – this peninsula. Ruth Maclennan lets the landscapes and the scenes of villages and holiday camps speak for themselves. Known to have changed hands many times over the last two millennia, Crimea has always been an object of desire, forced to conform to the will of its occupant at any given time, but in Theodosia we are treated to stepping back and observing the relationship between the land and the people who live in it, those who visit and those who have been driven out.

We get a sense from this portrayal that the current tensions in and over Crimea – which give this film a sudden urgency of relevance – are nothing new. In its quiet yet incisive depiction, the camera for the most part dispassionate, sometimes compassionate, we see many sides of the human nature and human desire mirrored in this stony country. The railway: ‘why did they build it right next to the beach? Why did they build it right through the town?’ – at one and the same time an assertion of national power and a means of accelerating life’s already transitory nature. And, here, the means by which an entire people was exiled in one night. A still, small voice in itself, Theodosia is in fact a potent song that can be found in the space between the lines of the discourses currently seeming, for lack of the same quality of vision as Maclennan shows here, to force East and West apart once again.