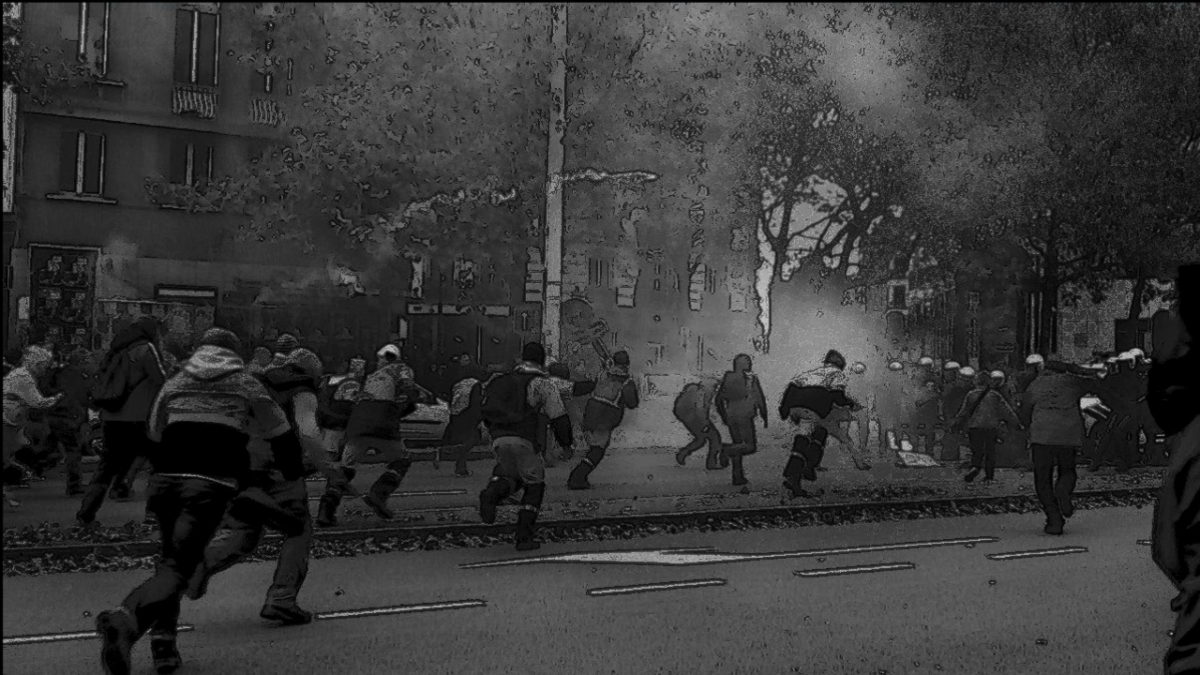 Tickets: £5 or free if you can present a ticket purchased for another screening on the day.
HERITAGE HUB – HEART OF HAWICK

Civil Rites takes Martin Luther King’s 1967 speech, given on receipt of his honorary doctorate from the University of Newcastle as a starting point for a studied exploration into sites in Newcastle and surrounding areas where a huge range of political and social grass roots events occurred, ranging from the monumental to the apparently inconsequential. It gives the places time and space, and through that, starts to ask questions; what happened here, and what did it change, and how does it affect the state of history and politics today?

Paired with The Barbarians, time seems to overlap, from history to recent and current sociopolitical events that take us up and above the current context in which the events occur. An acclaimed poem by Constantine Cavafy powerfully shows the universal and continuing nature of human behaviour in relation to power and politics, and speaks of how the themes of poverty, racism and war continue to haunt our lives.

* Michel Pavlou will be present for a Q&A. 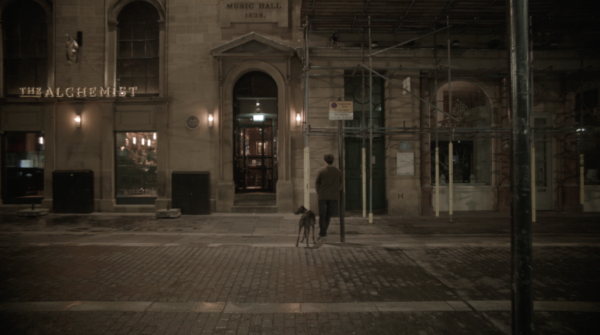 “Attention is the rarest and purest form of generosity.”
Simone Weil

Taking as a starting point Martin Luther King’s 1967 speech, given on receipt of his honorary doctorate, from the University of Newcastle, Civil Rites explores how the core themes of poverty, racism and war continue to haunt our lives. It listens to the voices of Newcastle citizens as they think through their responses to these themes, and locates these voices in dialogue with key sites of resistance from across the Tyneside region and across the centuries. It seeks to learn what has changed (or not) in the lives of people in Newcastle today.

Civil Rites is informed at its core by the harshly explicit manifestation in our times of those structures of violence (military, financial, ideological) that King identified and which continue to inform and direct our current reality. Social and economic inequality is worse than it has been for decades, racism and multiple forms of prejudice are resurgent, and the many ongoing conflicts across the globe (from Congo to Syria, West Papua to Myanmar) are fought so removed from our daily experience that they could well be happening on another planet (this distance only bridged with the arrival of their refugees…).

Drawing from original personal testimonies, the dozens of sites and stories catalogued by the Northumbria University website ‘Radical Tyneside’ and the research into King’s visit and the region’s historic links to the African American freedom struggle by Brian Ward*, the film visits certain of these key locations in the city’s history of civil resistance. Some have been buried beneath car parks and shopping malls. Others remain on busy streets. Some are publicly marked, others anonymous.

Each is filmed in a single fixed shot, and the sequence as a whole moves from dawn to dusk across the city. Each image takes in the found life of the location at that particular moment, without staging or planned intervention. Accompanying alternate images are edited responses from more than two dozen interviews conducted with older and recently arrived residents, housed and un-housed, community organisers, passers-by, educators and others. They were asked the following questions:

What does the word poverty mean to you?
Why does racism exist?
Why do you think war has not been eradicated?

Underlying and uniting the range of voices and sites is the ever-present sound of the sea, reminding us of Newcastle’s geographical location and industrial history, as well as suggesting the importance of the ‘Black Atlantic’*, the paradigm-shifting concept proposed by cultural historian and scholar Paul Gilroy. In this, he formulates a new understanding of diasporic relations, based on a radical re-interpretation of the changed identities created by the trans-Atlantic slave trade. Gilroy’s thesis favours hybridity over singular definitions and, of course, in terms of thinking about Martin Luther King and his visit to Newcastle, provides a re-invigorated intellectual, historical, and topographic framework for inquiry.

Civil Rites, therefore, could be considered a form of ‘witness statement’: place, voice and event working together both to honour moments of historic, collective resistance and to share thoughts and feelings on issues crucial to all our lives but about which we are rarely – if ever – asked. It also embodies, through calm attention (listening and looking) the ongoing necessity for such individual reflection and shared action into the future.

Biography/Filmography
Andrea Luka Zimmerman is an artist, cultural activist and filmmaker. She is the co-founder of artists’ collective Fugitive Images and the winner of the Artangel Open Award 2014 for her collaborative feature Cycle with Adrian Jackson (Cardboard Citizens). Her films have been nominated for the Grierson Award, The Aesthetica Art Prize, the Golden Orange, the Jarman Award, and the Glashuette original documentary award at the Berlin Film Festival (2017).

Exhibitions and projects include Common Ground, Spike Island, Bristol (2017), Real Estates (co-curated with David Roberts), PEER with LUX, London (2015). Her films include Erase and Forget (2017, 88mins) an inquiry into the nature of human conscience and the limits of deniability, which premiered at the 2017 Berlin Film Festival and in the UK at the London Film festival. Estate, a Reverie (2015, 83mins) tracks the passing of the Haggerston Estate in East London and the utopian promise of social housing it once offered, with a spirited celebration of extraordinary everyday humanity. Taskafa, Stories of the Street (2013, 66mins) explores resistance and co-existence through the lives of the street dogs of Istanbul and is voiced by John Berger. Zimmerman has made several commissioned short films for Film & Video Umbrella, Channel 4’s Random Acts and Tintype Gallery. She is also a founding member of Vision Machine (collaborators on Academy Award® nominated feature documentary The Look of Silence). 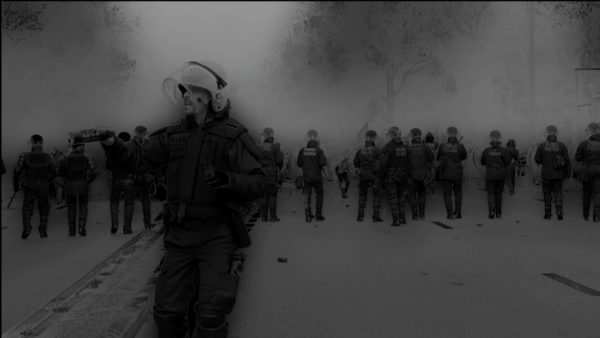 Scenes of recent sociopolitical events, demonstrations and riots, in what it seems to be a besieged city, associated with Cavafy’s and Aeschylus’ verses, compose the audiovisual material of The Barbarians. The monochrome images, the long takes and the slow motion confer to this work its timeless character, heightening the reversible relationship between the documentary and the fiction, the real and the imaginary.

In the first half, the video deploys its narrative structure, in line with that of Cavafy’s poem, moving from the simple to the hidden, from stating the obvious to glimpsing the underlying fears and threats in todays society of control; it brings to light through military and political protocols and rites, power relations and mechanisms to rule the urban space. Cavafy points out as potential solution what the establishment assigns as the problem, to justify its domination (the threat of the barbarians).

The second half, composed of one long sequence (street battle scene), builds up its audio track with recited fragments of Aeschylus’ Persians, to enhance the dramaturgy and extend the reading frame of the images by adding a historical perspective and a diachronic character of the power struggle. Like Aeschylus, who put himself in the “enemy’s” shoes, (although he fought as a soldier against the Persians) to convey an holistic experience of the war, The Barbarians attempts to place the viewer up and above the current sociopolitical context in which the events it depicts occur.

Biography/Filmography
Michel Pavlou is a visual artist and filmmaker whose work has been shown and awarded since 1990, in numerous exhibitions and festivals worldwide. Born in Greece (1960), he moved to France in 1978 where he studied economics in Strasbourg and Fine Arts at the National (Hight) School for Visual Arts in Nancy. From 1988 to 1998 he lived and worked in Paris, then in Oslo where he founded in 2003 (with the artist F. Kalantary) “Atopia”, an art space dedicated to the moving image. He lives and works in Oslo and Brussel.