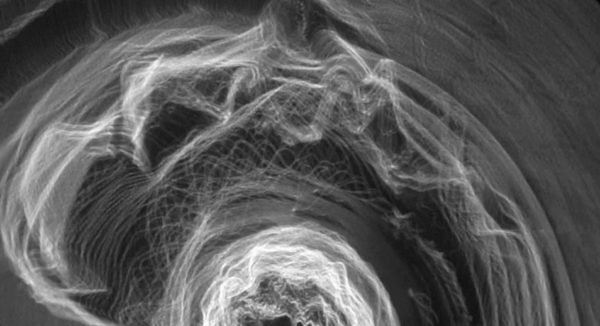 In #67, we witness a stroll through the electromagnetic worlds of machines and men, a world with a tonal coherence that humans rarely perceive. Drawing inspiration from the work of Steina and Woody Vasulka, Joost Rekveld created a modern analog equivalent of the original Rutt-Etra processor. Capturing the electromagnetic fluctuations omnipresent in an urban environment, emanating from power lines, electromotors, fluorescent lights and wireless communications, this world appears to oscillate, reflecting upon the 50 Hz frame rate of analog video. The result is similar to operating within an alien mode of perception, at once visceral in quite a human way, while also preserving something of its real world referents in a manner that allows us to connect and participate in the image.

Joost Rekveld is an artist and experimental filmmaker who lives and works in Amsterdam. Since 1990 he has realized a small oeuvre of abstract animated films and installations, and collaborated with many composers and theatre makers. Joost is also active as a curator and has a long history of teaching interdisciplinary arts at the intersection between art, science and technology. He is affiliated to the School of Arts University College Ghent as an artistic researcher.